A rank neonate Embraced on the cusp of the Cuman troubles, this Saxon of the Siebenburgen has yet to make his mark. His future is uncertain, imperilled between the scorn of his fellows and the cruel enmity of a Cuman Fiend.

A Transylvanian Saxon in his prime, solidly built and quite tall. He is good-looking and open-faced, with his square jaw, broad cheek bones and strong nose, and his eyes are a compelling, if somewhat furtive, blue. His clothing and weapons are of a Vlach style, clearly suited to a nobleman rather than a commoner. He favours a midnight blue cloak, and appears to be in the habit of keeping the hood drawn over his closely cropped honey blonde hair.

This young vampire is a resident of Castelul Câmpulung, where he does his best to avoid the notice of his sire, Lady Raluca, and his older consanguineous brothers, Doru and Gigel of Câmpulung. Throughout the stay of the Ashen Band at the castle, he was present for the negotiations, but he was prone to shifting nervously, especially when either of his demanding brothers-in-blood called upon his extensive knowledge regarding the roads and trade routes between Kronstadt and Bucharest. They seemed impatient with his dithering, and their testy scrutiny left him even more anxious. Outside of session, he was a furtive presence in the castle, all but hiding from the newcomers. The one exception to this was the Nosferatu, Sága, whose charisma and apparent sense of compassion was enough to drive the fledgeling to take a chance.

Adam kept an eye on her and then approached her secretively, when he was sure that she was alone. He attempted to divine whether she was truly as practical, trustworthy and kind as she seemed and, once satisfied, sought her sympathetic ear. The fledgeling then told her that he was a native of Kronstadt, brought across into undeath by Lady Raluca for his extensive knowledge of the the trade routes that crossed her lands. His fluency in the languages of the Cumans and the Bulgars, and his contacts in the settlements of Pitești, Târgoviște, and Bucharest were judged to be very useful to the kneza, and he was Embraced as the war with the Cumans broke out. In time, it was intended that his role would be to regenerate the influence of Câmpulung across those trade routes, as his ability to speak with all parties afforded a certain utility to deal with whomever attained victory in the conflict.

Unfortunately, his first attempt to treat with the Cumans earned him nothing but pain. Instead of mutually beneficial discussion, the Cumans simply ignored his banner of truce, took him captive, then tortured him for intelligence regarding the defences of Castelul Câmpulung. While Doru, Zugol, and Lady Raluca herself managed to mount a speedy rescue, Adam’s inability to withstand the interrogation would cost the defenders many lives in the assaults ahead. The leader of the Cuman Cainites that abused him was one Tugor, who bellowed taunts about his weakness from afar as the siege continued. The barbaric Tzimisce also sought him out personally during the assaults on the walls, if only to beat down his will further, and Tugor took cruel delight in cutting him down in both battles. With his pathetic showing, Adam now feared that his beloved sire (to whom he was obviously blood bound) and his consanguineous brothers had entirely lost faith in his talents, and he worried that if his unworthiness continued, Final Death at his mistress’ fangs would be the result.

The young Cainite expressed no desire to flee, and in truth, he could not even if he wanted, for he was Embraced in the shadow of this castle, and his sacred grave earth was here. Fatalistically, he claimed that while he never wanted to be a vampire, it was clear that it was in God’s plan for him, so he was determined to earn the respect and love of his new family or perish in the trying. Adam then pressed a letter, much creased from time and fretting, into Sága’s hand. He described a house not far from the town square of Kronstadt, and asked if the Nosferatu would take care to visit it and see the missive delivered to his wife, Anna.

Adam begged of her this kindness, since he had no coin and no favours to offer for the service. He then explained that while he was now undead, he could not resist pining for the living family that was now denied him. His new existence made it impossible for him to return to Kronstadt at this time, but he often wrote to his uncle, his brother, his wife and his children to let them know that he was well, and that he would come home when the war was over. With the Cuman sieges of Câmpulung, and the heightened perils of the road, Adam’s family had not heard from him in almost a year, and he could not bear the thought that they might have given up hope that he would ever return. Of course, he said sadly, he might well never return, but he was not willing to accept that yet…

Sága realised that the young man had taken an awful chance to reveal his secret to her, and she promised that she would see the letter into Anna’s hands. The Tzimisce fledgeling thanked her, the sheen of bloody tears in his eyes. He then took his leave and slinked away when he saw Doru approaching. Adam played dumb at the next session, and would say nothing further to any of the Ashen Band before they took their leave for Argeș the next evening. 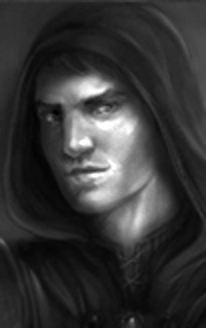