This Gangrel servant of Marelle was a clever woodsman, adept at scouting the Lupine infested fringes of the Margraviate of Hermannstadt. He was likely slain trying to warn the Hell Hounds of an impending attack.

A short Vlach with a thick beard, lank hair, and wary, steady eyes. He had a slightly hunched, ready posture. Rather than deformed or cowardly, howevet, it was as if he was simply hyper-alert, ready to fight or flee at the slightest sign of danger. He was garbed in leathers and animal furs, and typically went armed with a hunting knife, a crude silver belt knife, and a baltag (shepherd’s axe). Adrian showed little evidence of his clan’s weakness, other than an unusually thick amount of coarse black body hair.

The most elusive of Marelle’s followers, this Gangrel was a loner valued for his knowledge of their hated enemies among the Umbra Domnii Varcolaci , the black furred werewolves upon whom they made constant war. Adrian was included among her own Hell Hounds of the Black Cave but he kept himself apart, hunting and sleeping alone out of a fervent superstition that the werewolves could smell the others on him if he did not.

He was encountered but once by Svenin the Tall and his allies among the Concord. When the viking made his initial overtures to Marelle, his clansman sat on the far side of the bonfire, his expression one of wary and shrewd respect.

Despite attempts to make contact later, Svenin was unable to track Adrian down. Evidently some of his foes did, however, for the younger Gangrel vanished shortly before the Umbra Domnii launched a suprise attack that destroyed the Twisted Oak pack.

Lineage childe of Aliye (d), of the line of Matasuntha. Adrian placed himself among the 11th generation. 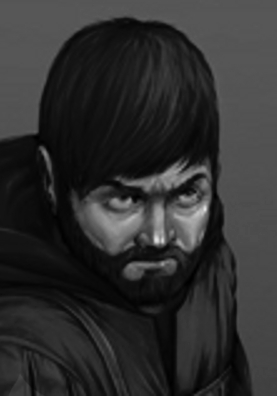