The 'mother' of the Baron's Gangrel, this ancilla administrated both the far-flung and near concerns of her sire and liege. She vanished during the Great Sack.

A grandmotherly woman wrapped in a heavy dress and a shawl, slightly bent with age and leaning on a gnarled walking stick. She has salt and pepper long hair and a face heavily lined with worry.

In life, Agnes was a simple woman of poor means. She was born and raised in one of the poorer districts of Constantinople, and eked out an existence alongside her mother and many other fisherman’s daughters, mending nets and gutting fish for sale in the markets.

The pull of monastic life was strong in her family, with three of her four brothers taking vows, but Agnes was more practical than spiritual, and chose to marry her distant cousin, a fisherman not unlike her father. In time she raised her children in the same manner that her poor parents had raised her, and some of her own children joined the ranks of the Akoimetai as well. Life was hard, but she was happy, and she became popular in her community for her kindly ways. Then the Scarlet Fever struck in the summer of 1068 and in a matter of months she lost her husband, two of her children and many of her friends.

Rather than give up hope, and seeing that misery was the lot of all, Agnes took the orphaned children of her friends and neighbours under her own roof and raised them alongside her own. She nursed those that grew ill but lost many as the Fever raged amongst the poor of the city.

A strange, pale waif by the name of Urbien offered his aid, and frequently scrounged food and blankets far beyond anyone’s means but that of a thief. Agnes cared little for the origins of his munificence, nor his obviously supernatural nature, as his good heart and generous nature were a boon to her tired soul. All he asked in payment was her blood, and Agnes thought it a good trade. He would sometimes sit the death vigil with children in the still of the deepest night, and they would miraculously pull through to the next day under his care. Sometimes they even recovered.

Together they saved more than a few, and while he chose to remain in the shadows and moved on to other things, Agnes worked tirelessly to feed and cloth the poor orphans of Constantinople even after the city returned to normal. In the years to come, Mother Agnes became a living legend among her people, but she grew old before her time with her cares and her hardships. In due course she caught a chill that turned into a rattling cough, and she was soon bedridden and near death.

Then Urbien returned in the company of a scarred Frank with the eyes of a cat. Through her delirium she heard the boy ask the Baron Feroux if the poor and lowly of Constantinople could afford to lose such a one as Mother Agnes, to which the Frank replied that the Gangrel could use her wisdom and pity as well. She recalled little of her Embrace, though she did remember that the baron gave her no choice in the matter. At first horrified at being forced to drink the blood of her charges, Agnes eventually reconciled to her new condition and has adopted a similar outlook to Urbien. With the benefit of hindsight, she realised that Cainites had always surrounded her, and that as much good as evil can result from their involvement in the lives of mortals. Her service to the Dream was modest but, in her eyes, it was equally important that the poor receive charity so that all could enjoy the paradise that the Dream stood for.

Agnes was a stalwart member of the Baron’s Gangrel, and never left the city. She had a room at the Citadel of Petrion, though she was welcome in a number of poor homes in the Greek districts and often did not return to the citadel for weeks at a time. When present, she could most often be found at the kennels, for Agnes had a fascination with animal behaviour, and was one of the best animal trainers among her fellows. Four mongrel hounds dogged her steps wherever she made her rounds throughout the city.

While she held no official rank among the Baron’s Gangrel, and was technically outranked by Justinian, Urbien, and Verpus, her opinions were quite influential among them. Her sire, the baron, considered her wisdom before any others save that of Gesu and Symeon, and he was known to take her with him when receiving counsel from those august Obertus scions. Indeed, Agnes probably knew more of the inner workings of the Draconian Tzimisce than any other Gangrel, perhaps save Baron Thomas himself.

Unfortunately for the lowly folk of Constantinople, Mother Agnes was lost during the Great Sack. She failed to answer the summons when Baron Thomas called his vassals to defend the Citadel of Petrion, and her dogs were later found slaughtered by spear and sword under an arch of the Aqueduct of Valens, outside the monastery of Theotikos Kyriotisa. She has not been seen in the many years since, and given that skill in battle was never counted among her talents, her remaining fellows fear the worst.

Lineage: Childe of Baron Thomas Feroux, Childe of Marie Feroux (d); further lineage is unknown, but she was placed among the 8th generation. 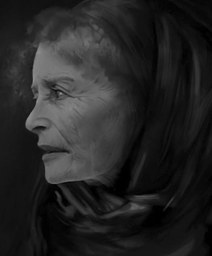