The Tale-weaver, a Nosferatu ancilla of most unusual origins, serves Lord Jürgen as his spymaster, responsible for coordinating his intelligence network across his vast territories.

A horridly deformed, brown skinned woman with puss-filled boils all over her body. What little of her salt and pepper hair remains is wispy and and ragged, but for a braid that runs behind her one good ear. Her weeping right eye is covered by a milky cataract, but her left is sharp and alert. She is heavily garbed in layers of fine, dun coloured woollen robes.

(expanded from the character as presented in Under a Black Cross, p.87).

This Nosferatu, enigmatic even for one of her ilk, is perhaps the greatest mystery of Lord Jürgen von Verden’s regime. Cowled and swathed in heavy robes, Akuji can sometimes be found in her lord’s court, quietly watching the proceedings. She makes comments when bidden to do so by Lord Jürgen, but otherwise keeps her counsel for behind closed doors. However, it is those times when Akuji is not visible at court that worries the other Cainites of Magdeburg and Jürgen’s greater demesnes, for few of them possess the capacity to sense her comings and goings. And like the Ghost, who formerly served as his personal spy, they resent Akuji for spying on them. Unlike Albin, however, none of them would ever dare scorn the Tale-weaver, for she enjoys her lord’s highest favour, admiration and respect, and she does not work alone. Indeed, the network of clan-mates that she has woven for her master is one of the finest organisations of intelligencers active in Europe.

So how did a Muslim Berber, from the deserts of North Africa, find her way into the service and good graces of the Sword-bearer?

It is said that Akuji was born with a wanderer’s spirit, and she has volunteered that she was raised in a caravansary on the edge of the Sahara, near a distant city called Sijilmasa. As the daughter of a trader, she heard many tales of faraway lands and great or intriguing events. Inspired by those tales and using her natural talent as a storyteller, she grew skilled at weaving those tales into remarkable adventures of flight and fancy. Eventually, she would leave her tiny home and seek out thrills of her own across the wide expanse of North Africa. In the past, Akuji has entertained Lord Jürgen’s court with her amazing store of tales, some faithful accounts of historical events and others wild and fanciful. Occasionally, those who hear her stories get lost in the borders of fact and fiction. However, she has always been curiously reticent about the circumstances that led her to travel across the Mediterranean and find herself in the courts of Holy Roman Ventrue, and a melancholy air has been observed about the Nosferatu when she spins stories of her later mortal years.

She first appeared in the cities of the Holy Roman Empire in the last decade of the 10th century, not yet undead but travelling in the company of Kristoff, a Nosferatu spymaster in the service of Hardestadt the Elder. Even then, it was clear to those Cainites that took an interest in this Moor, this female Moor, who slipped in and out of their cities so blithely, that Akuji was destined for the Clan Nosferatu. Kristoff brought Akuji across in the first years of the 11th century, and after a long apprenticeship, formally released her at the court of his master in AD 1020. There Akuji met Jürgen von Verden, and something about the ambitious and reckless young Ventrue, then barely 30 years undead himself, seemed to touch off a sense of admiration in the Nosferatu neonate. She made it her business to get to know him. Over the years of his own service to his sire, they became acquaintances, sharing information that benefitted them both. Jürgen’s star rose after AD 1050, when he was released to seek territories of his own, and Akuji continued to provide intelligence that assisted with his growth in power.

By the turn of the 12th century, they had come to trust and confide in one another, after a fashion. And as his empire gradually came into conflict with the demesnes of the hoary Tzimisce of the East, Jürgen came to realise that there were a number of salient concerns that required somebody of his Nosferatu ally’s particular talents. He made Akuji the offer of becoming his official spymaster, and with Kristoff’s proud consent, the Tale-weaver became Lord Jürgen’s vassal in AD 1115. She has served him as one of his closest confidants and most trusted aides ever since, having accompanied him on a number of his most triumphant conquests, including his participation in the Third Crusade. Although she is weak in blood herself, her unfailing and faithful service to Jürgen has brought her much status, and Akuji has even Embraced a number of progeny to further her bloodline’s usefulness to the Sword-bearer.

Akuji was present during the Magdeburg Affair, and Svenin the Tall and Veceslav Basarab both noted that many of the animals of the city were worshipfully loyal to the “cold one with the sweet voice.” However, other than voicing suspicion regarding the role of the otherwise underestimated and ignored Myca Vykos, she encountered the Concord but little during their investigations into the theft of the Sword of Sceptres and Roses. Indeed, more than one of the coterie have voiced worry in the intervening years that Akuji knows rather more of their activities in Magdeburg that spring than she is letting on. If this is true, the Nosferatu has thus far chosen to say nothing.

She has followed her master to the Burzenland, where she works to expand her network and counter the animal spies and saboteurs of the Tzimisce. It is likely that her own Transylvanian clan-mates will not welcome Akuji, given their traditional alliance with the Dragons, but owing to the alliance between her master and Marusca, she can count on the Nosferatu of Hermanstadt.

Lineage: Akuji is the childe of Kristoff, one of several noted spymasters in the service of Hardestadt the Elder. He in turn is a childe of Horst die Versteckten (the Hidden), a mercenary ancilla who sells his information to the highest bidder in the land of Franconia. Horst is the childe of Imma die Blau (the Blue), who once provided a similar role before her untimely demise at the claws of a werewolf in Wiesbaden. Imma was not one for giving up secrets, even to her descendants, so her own sire is unknown. Akuji places herself in the 11th generation. 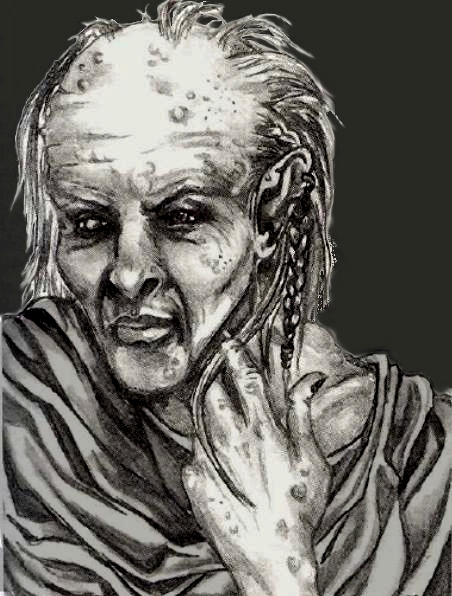