This ancilla is the Protector of the Island of San Michele and Nicolo's loyal childe and right hand. He receives those who come to the island, and attacks those who are not welcome.

A tall, hulking, brute of a monster, dressed in rags that might have once belonged to a craftsman, dock-worker or sailor. His nose is crushed to a face dominated by angry, beady eyes, and several long tattoos decorate his scalp. Numerous scars adorn his misshapen, over-long arms. A golden ear ring still decorates one of long, pointed ears. He is armed with a woodcutters axe, often a hammer, or sometimes a shovel.

Albero is the strong right hand to Nicolo’s clever mind. He patrols the Island of San Michele, and challenges everyone that he finds. Those whom he deems to be unfriendly or hostile to the Nosferatu or their mortal charges are attacked without warning, but those who appear to come in peace will be given a chance to explain their presence. He prefers to keep to himself, but occasionally can be lured towards the festivities of the communal fire-pit where he displays a strong baritone well equipped to belt out the lustiest of sea shanties or the deepest of folk songs.

A sailor, brawler, drinker and roustabout in life, Albero came to San Michele when his advancing years and alcoholism made him useless to go to sea. He took a job as a cemetery caretaker, and found that he enjoyed the peace that the occupation gave him. By day, he weeded the mausoleum gardens, cleared away rubbish, and ensured that people respected the dead, and by night he had silence and the comfort of all those beautifully laid stones to wander amongst by moonlight. Best of all, there were cats. Dozens of them. The Nosferatu Nicolo, impressed with the kindness to which he showed the cats of the necropolis, took to watching the hulking brute go about his nightly business on the island. Albero did not seek the company of other people much, but he would often fish much of the night to provide food for his little friends before he retired to a hut on the western end of the island. The cats would follow him around all day while he went about his duties, and keep watch for him at night while he slept troubled dreams.

Eventually, after he had lost his sire Maria to the Wassail and Prince Narses’ resulting Blood Hunt, Nicolo conceived of a need for a companion and he approached Albero while he fished. The offer of the Embrace was made simply and without subterfuge- Albero was told that he would look like a monster forever, but that he could care for his mausoleums and his cats forever too. Just to reinforce the notion of monstrousness, Nicolo took a chance and showed his true self to the man. Never one to care much about his brutish looks anyway, unable to abandon his friends, and sensing that the Nosferatu understood him like none other, Albero accepted.

Albero has been the protector of San Michele ever since. He still looks after his cats, and knows the names and lineages of every last one of them. At some point, he came to see the people that sheltered there as his family too. He tells the stories of the cats to the youths that sleep on the island, and gives each one a kitten to raise as their own brother or sister. Generations of cats, and people, have lived and died on San Michele, and Albero has a song for each of them. Nicolo might be the brains and the leadership of the Wretches of Venice, but Albero is the one that their people look up to, and feel most safe with.

Lineage: Albero is of the 9th generation. He is the childe of Nicolo, childe of Maria (d), childe of Cloacina; further lineage is unknown, other than the fact that Cloacina hailed from Rome. 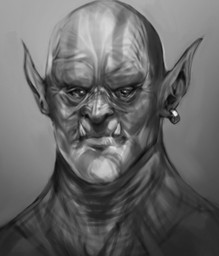