A methuselah advisor to the Antonian Ventrue, this lady was the sole sanctioned Cappadocian within the Greek districts of Constantinople. She vanished during the Great Sack, and is thought to have suffered the Final Death.

This small, slight woman was strangely compelling with her marble-like, almost luminescent skin. Of regal bearing and unsmiling, rigid features, she appeared to be in late middle age judging by the grey in her hair and the ever-so slight wrinkles in her countenance. She wore the latest in Byzantine court fashions. On the rare occasion that she was confronted by a sudden physical threat, it is known that she carried a pair of matched, needle sharp daggers hidden on her person.

While not the eldest Cainite in the city, Lady Alexia Theusa has been the longest constant resident of Byzantium. It is thought that she was Embraced in the Greek colony at least three hundred years before the birth of Christ, and that her sire is none other than the Cappadocian Antedeluvian. Whatever the case, by the time the Romans arrived to destroy, then rebuild, Byzantium in AD 194, she had long been the only Cainite resident of the city.

With the legions of Septimus Severus came Ectoris and his brood. The Lasombra and his progeny, including the ancilla Magnus, wisely stayed clear of her, perhaps sensing the potency of her Blood, and for her part Alexia seemed content to exist quietly until Michael, Antonius and the Dracon arrived to build their Dream. She became an unofficial advisor to Antonius on scholastic matters, and was entrusted with seeing to the health of the imperial household. After more than a century of faithful, unflappable service she was finally adopted as a Scion of the Antonians during the Second Council of AD 479.

Alexia quietly served Basileus Antonius for more than five centuries, then dispassionately accepted the change of status quo when Caius slew his own sire and replaced him. Indeed, she had perhaps even more influence over him than she did with his late sire, for Caius lacked the educated and inquiring mind of Antonius, and he relied heavily on her advice and her knowledge far more heavily. Throughout the length of his reign from AD 796 until the loss of the city in 1204, she had no official duties other than that of advisor, but Lady Alexia also keeps track of the city’s healing community and a number of hospices. Her supernal proficiency with herbal medicine, centuries of medical observations and extraordinary command of the ritual death magic of her clan had made her a remarkable physician herself, and she was known to patronise talented mortals in the healing arts. Lady Alexia also saw to the health of the imperial family, albeit under the loose supervision of Ducas.

Lady Alexia had few intellectual equals in the city. She maintained a correspondence with Gesu of the Obertus Order, and was one of the few outsiders who was welcome in the Monastery of St. John Studius. She also appreciated the minds of the Quaesitori Symeon and Petronius, and occasionally consulted with both of them. Lady Alexia remained neutral and uninterested in the power struggle between Quaesitor Anna Comnena and Caesar Magister Nicepherus, although on at least one occasion she publicly complemented the upstart Anna on her scholarship of the Alexiad.

The ancient Cappadocian was present at the Blood Feast in honour of the coterie, but did not interact with them. She spent the entire evening by the golden throne of Caius, and left in the basileus’ company. Overtures by Sister Maude Khlesl were initially arrogantly rebuffed, but evidence of the neonate’s talent with both the medical and necromantic arts eventually won a measure of respect from Alexia. In the course of time, they agreed to an exchange of sorts, and the ancient was content to allow Sister Maude to visit the city without interference. She had no interest in offering an invitation to join her so-called Scion family, but to be fair that unlike the embittered Markus Musa Giovanni it is unlikely that the Austrian would have accepted if such an offer was made.

During the course of events that led to the capture and Great Sack of Constantinople in 1204, Alexia’s dispassionate facade appeared to crack. As disaster loomed she blossomed with nervous energy, but if her typical reticence was suffering, she was curiously hesitant to take an active hand in events. When disaster struck, and the city was fell, Lady Alexia is known to have fled to Anatolia in company with the Nosferatu Malachite, the Gangrel Verpus Sauzezh, and a number of the knights of St. Ladre. In the many years since, she has failed to return.

As her absence from the city that she had rarely left throughout her existence lengthened, rumour ran rampant that she would not return at all. Naturally, the greed of many was quickened, as speculation about Lady Alexia’s elusive haven, supposedly containing a magnificent library of the occult and treasury of curios otherwise vanished from the world, had long inspired the wonder of those near and far. Indeed, late in 1204 the Concord was one of several groups that responded to a disturbance in the Shadowlands centred upon the Acropolis of ancient Byzantium. Among those investigating were the Giovanni and also a cabal of mortal magi fascinated by the energies of death and entropy. With the assistance of the knights of St. Ladre, the Concord was the first to succeed in gaining entrance, and they successfully covered their tracks. Within was indeed a magnificent library, albeit coded with a (still unbroken) cipher, as well as a vast store of wonders including magical herbs and oils, and rare, costly components of ritual magic. The most extraordinary discovery, however, was the existence of more than forty torpid Cainites, imprisoned by the necromantic magics of Lady Alexia herself. And chief among those was her sire, Byzar, whom they chose to free from his prison.

Several years later, Markus Musa Giovanni reappeared at the Saut Aswad, exhausted and travel stained, happy to revisit the city that he had come to call home. Unusually loquacious and indiscrete after being plied with wine-laced vitae, Markus was overheard to remark that the venerable Alexia had finally rediscovered what it was like to be a childe next to the power of one who is truly ancient. She wouldn’t be condescending anyone ever again, unless it is in Hell. Even through his bravado, it was clear that there was a shadow of fear and unease behind his smug smile. The rumour spread among the Cainites of Byzantium and beyond, but few believe it as verity has never been considered among Markus’ virtues.

For his part, the risen methuselah known as Byzar has quietly confirmed to Sister Maude and Iulia that he “felt” the death of his childe in September of 1204. Although he spoke of her with great venom and contempt when they freed him from her prison months earlier, his voice was thick with grief when he shared knowledge of her demise. Despite the acrimony over her awful betrayal, Byzar still felt an echo of the love and fascination that led him to inadvisably Embrace her fifteen hundred years earlier.

Embrace: Byzar has told the coterie that he Embraced Alexia some time around 300 BC. 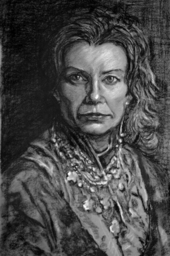