An weary, secretive Cappadocian, humble of purpose, who nevertheless presents as a man of action, used to being obeyed. He is an ally of the Ashen Band.

An old man, easily pushing 70, notable for his ghastly complexion and long white beard. His frame looks to have once held a good deal of muscle, but he now seems to be somewhat frail. Nonetheless, he holds himself tall and straight, and his demeanour is proud, confident, and far from tired or sickly. Indeed, while his tunic, leggings, and cloak are of humble enough make, and he makes an effort to carry himself like a simple old soldier, he is clearly a man who is used to being obeyed. He is armed with a Byzantine cavalry sabre known as a paramêrion, a dagger, and a long staff reinforced by steel at either end.

First encountered at the Green Square caravaranserai on the road between Haifa and Acre, this ancilla appeared to guardedly welcome the attention and friendship of the Ashen Band. After taking stock of their intentions as pilgrims of the crusade, he informed them that he had spent recent years preparing for the campaign by scouting out a number of fortresses and settlements in the Nile delta. Unfortunately, he had failed to extricate himself without discovery, and now he feared that a coterie of Assamites was hunting him to put an end to his precious knowledge. Indeed, he believed that he had spotted one on the road outside Haifa the previous evening.

Understanding the value of his intelligence, the Ashen Band enlisted a number of other crusading vampires in their midst, and volunteered their services to escort him to Acre, where he hoped to enter the service of the influential Toreador neonate, Maria Comnena. Nicephoros’ hunch was correct, for they were attacked by a band of the Banu Haqim several miles down the road. The ambush was a qualified failure, for the dreaded Saracens were forced to attack though outnumbered and they lost one of their own, captured by the Ashen Band. They did, however, succeed in poisoning Nicephoros, who was driven into torpor.

Uncertain of how to proceed, the coterie of neonates took charge of the protection of his body. The details of the Saracens’ Quietus discipline is poorly understood by the Band, but their travelling companion, the Ventrue Vicelin de Marseille confirmed that their poisoned blood could sap the stamina of the undead for any length of time, or even deal the sort of grievous damage necessary to send one to the Final Death. Indeed, he remarked cynically, the fact that Nicepherus was still intact was a good sign, but beyond that nothing was certain.

Upon arrival at the crusader camp outside Acre, Marius de Şimand was quick to take charge of the protection of Nicephoros, proving to be uncommonly dedicated in the endeavour considering that the Cappadocian was a near-perfect stranger. Helena, Andras, and Ulrich also assisted him in turns, as did their retainers. Hovering at the borders of undeath and the Final Death, he was guarded around the clock by ghouls and vampires for almost a week, but the Assamites did not reappear to finish their work. It was not until the shock of the collapse of the holy aura surrounding the city washed over the camp that the old soldier opened his eyes. Still weak, he was nonetheless eager to feed, then relay his important information to Maria Comnena and her husband, al-Shaear Wahid.

Shortly thereafter, word arrived at their quarters that Marius was required at the king’s palace, newly claimed as a dominion of the Bashirite Prince of Acre, Etienne de Fauberge. There, the Cappadocian and the Lasombra were quickly embroiled in the assault on the infernalist nest beneath the Tower of Flies. It says much for Nicephoros’ fear of the Banu Haqim that he felt safer entering a dire and unknown danger in the company of a small army of Cainites rather than remaining behind with the risk of insufficient protection from his hunters. In the conflict to come he would stand as part of the support coterie, trusting that at a shout he could find assistance from his new allies.

Embrace: Nicephoros has said nothing of the timing of his embrace, but he claims to be an ancilla. The style and cut of his beard as well as the manner in which he wears his clothes bespeaks of the early decades of Byzantium’s 12th century. The boast seems good, as he has certainly displayed a good measure of the supernatural toughness expected of a Cappadocian warrior more than a century with the Blood. He has also displayed skill with Auspex, and at least some rudimentary ability in the art of Obfuscate.

Lineage: He introduces himself as standing among the 10th generation, the childe of Eudokia Damaskena, an Orthodox nun hailing from a mortal noble family of considerable age and influence, who perished in the crusader capture of Nicaea in 1097. She in turn was the childe of Franz Frankel, a physician from the Holy Roman Empire who settled in Nicaea in the 10th century, later falling to the fangs of Seljuk Assamites during the Turkish capture of that city in 1081. He is unaware of his further lineage. 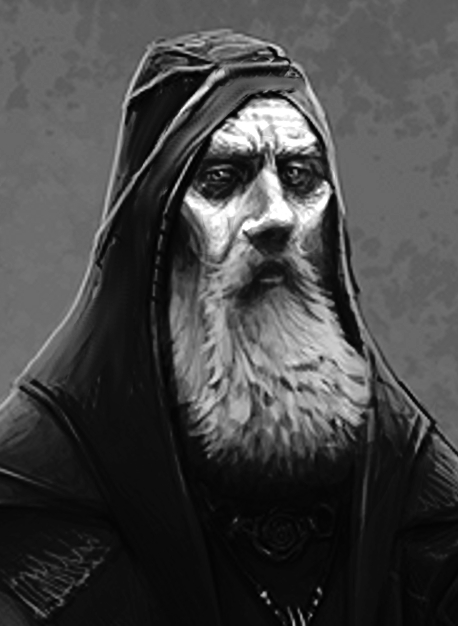