A loyal servant, friend and ghoul to Lotario Acuto, this mercenary was slain by the Nosferatu "crusader" known as Thierry de Villiers.

Alfonse was a tough, scarred ruffian sporting a bristling goatee and long, braided brown hair. His dark eyes were hard and calculating, and his mouth looked more accustomed to scowling than smiling. His cloth and hooded cloak was of drab, common, functional cut and his leather armour, sword, knife and shield looked to have seen a great deal of wear. A crossbow was typically held nonchalantly at his side, though his hand strayed readily to the quiver of bolts hanging from his belt.

Alfonse was a ruffian and mercenary with little regard for civilised ways and absolutely no patience for the weakness that soft and comfortable living brought with it. He was a good fighter, a hard drinker, a capable thief and an opinionated ingrate, but he could be kind enough to those who had earned his respect and regard.This circle was very tight indeed, consisting of few other than Lotario Acuto, the Toreador, his fellow ghoul Myra Soukistazia and his friend and former paymaster, Antonio Milazzo. Although he had done work for Lotario for years, it was not until AD 1201 that the Toreador offered his vitae to the mercernary and, although he had a few misgivings, Alfonse accepted the offer on the understanding that it would make him both tougher and stronger than most men.

In the three years he served as Lotario’s ghoul, Alfonse was both his domitor’s daytime protector and also the Toreador’s touchstone into the rumour-mlls of the street. When necessary, he was also called upon to undertake the odd bit of burglary. Lotario had a great deal of investment in his talented thug, teaching him the looser points of establishing his own networks and seeking out talented like-minded individuals for recruitment. At times, he would also serve as bodyguard for his master and, as the intrigues of the Concord in Constantinople heated up, Alfonse even faced off against other ghouls and even a couple of vampires.

And so it was that on one damp winter’s evening late in 1203, Alfonse Borgio found himself on a cog in the Bosporus. An ambush had been arranged for Sir Felix of Vaucluse and the House of Fabricius, in hopes of diminishing the Ventrue crusader-lord’s status in favour of enhancing that of the more honourable Guy of Provence. Alfonse acquitted himself well in the fight, helping his domitor take down Sir Herpin of Belfort and then backing Lotario as he rushed to engage a number of other vampires who formed a stubborn knot of resistance against the Concord, the Baron’s Gangrel and the Scholai Guard. As Sister Maude Khlesl and Lotario dealt with the Gangrel known as Marcel de Villiers, Alfonse found himself protecting his master’s flank against Marcel’s Nosferatu companion, Thierry.

Unfortunately for the ghoul, he was horridly out-classed by the vampire. With one blow from his axe, the Nosferatu split the mortal from collarbone to hip. Alfonse fell, and despite the fevered efforts of the Scholai to stanch the wound, he bled out just moments later. 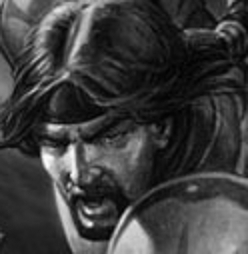