An English ex-expatriate who plies the waters of the eastern Mediterranean from his base in the Amalfitan Quarter of Constantinople. This Gangrel ancilla is an ally of Alessa di Positano.

A slender but healthy Englishman in his middle years, who moves with the rolling gait of a sailor. His clothes are loose and baggy, and he wears a wide, studded belt with a sheathed long dagger fastened to it. His short, wavy brown hair, steady blue eyes and rough good looks tend to draw the eye.

The least known of Alessa da Positano’s coterie, Ambrose has, with mixed success, made a point of keeping his nose out of Latin Quarter politics. Since the mid-1170, he has been a frequent visitor to the quarter as part of his trade run between Amalfi, Iraklion, Constantinople, Famagusta, and Haifa, and he has always been welcome by virtue of his service as a courier and transporter. His sire, Megan of Bristol, runs a similar service between Iberia, Italy and North Africa, and it is thought that other progeny of Megan’s occupy similar niches in other parts of the Mediterranean. He is somewhat evasive about his reasons for leaving England, saying only that he “sought adventure and fortune in his youth, and neither were to be had at home…”

Ambrose claims to be a profiteer, nothing more and nothing less. The source of his small fortune reportedly lies in transporting food, arms and mercenaries to strategic theatres of the Levant, during both the Third Crusade and to the declining Kingdom of Jerusalem and Principality of Antioch in the difficult years of the 1190s. In AD 1217, he was one of the captains who answered the call of Theophanos of Epirus, taking silver to transport stranded elements of the Fifth Crusade from Spalato to Acre. Uninterested in the politics or religion of the crusade, he quickly departed on other business.

The Englishman is not without scruple however, and has displayed a certain chivalry and soft touch from time to time. He is no slave-trader, nor will he transport those Cainites who abuse their herds. Even so, before the Great Sack, Ambrose was known to have attended Bishop Alfonzo’s Blood Feasts, even though the suffering he beheld at them clearly dismayed him. Like his friend Nerea of Spain, he appeared to attend the parties out of a sense of obligation and self-castigation. In the years since Alfonzo became prince, Ambrose has found convenient excuse to be at sea whenever the invitations have been sent out. After the chaotic and tragic events of the Great Sack, he also waived any fee when he conveyed his grandsire, Lucien, and the despondent Petronius to parts unknown.

His stated reason for settling in the Amalfitan Quarter in AD 1199 was that he saw a power vacuum and a means of making quick silver to expand his holdings. Master Alfredo and Ambrose have a long-standing quarrel of a personal and private nature, and so the Englishman chose to ally with the Brujah’s rival, Alessa da Positano, in order to spite him. Ambrose is somewhat uncomfortable with her hard-hearted tactics and also with the willful callousness of his coterie-mate, Jean de Marseille, but he appears to be willing enough to turn a blind eye to advance his own schemes. Cosima of Chimaira and he share a close (some say intimate) bond, to the point where he often stays with her at her haven rather than aboard his own ship, the nava known as the Sea Lion. Ambrose now resides in the city for about seven months of the year, trusting his ghouls, Captain Michael of Acre and First Mate Erasmus d’Amalfi, to run his business in his absence.

Although having little influence in Constantinople itself, his connections abroad make him invaluable to the coterie. In addition to this, the Gangrel has significant capital to devote to their mutual ventures, and is thought to have shares in a number of warehouses and several ships in addition to his outright ownership of the Sea Lion.

Embrace: Upon meeting Svenin the Tall in AD 1204, Ambrose stated that he had seen some 80 years. Judging from his apparent age, that would place his embrace some time in the middle of the 1150s.

Lineage: Childe of Megan of Bristol, childe of Lucien the Roman; further lineage is unknown, but he is thought to be of the 10th generation. 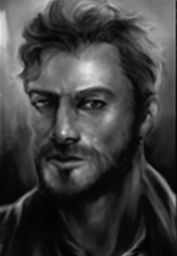