The consanguineous sister of Petrus the Troubadour, this Phaedymite briefly mentored Francis in the arts of combat.

An noble lady of Lombardy, fond of wearing ceremonial armour of leather and mail when in the company of other Cainites, or else dresses cut for ease of movement the rest of the time. Her device is that of a red lion on a white field, and she often wears a black cape or cloak prominently displaying her heraldry.Even on casual occasions, she wears a sword and dagger belted at her waist, and her mousy brown hair is pulled back into a long braid. Despite her apparent readiness for action, she also appears to be a relaxed, good humoured creature, for a mischievous glint rarely leaves her eyes, and she is commonly found with a smirk plastered across her face.

Noted for being the strongest warrior among the formidable brood of ancillae sired by Marcia Felicia Licinia, Ana Lisa has long been a fixture of Cainite politics in the Marquisate of Montferrat. There she fulfills the wishes of her sire, performing as messenger, advisor, and occasional spy for the local princes. Francisque de Saissac first met her in February of 1161, on the night of his embrace. She asked him some pointed questions concerning his motives for joining the “Order of Phaedyme,” and also inquired as to his readiness to meet the enemies of the bloodline in battle. His curious responses of nonchalant enthusiasm appeared to charm her, and Ana Lisa offered her services as a tutor to improve his skills when he and his prospective sire, Petrus, were ready to attend her at her horse ranch in the valley of Susa, outside of Turin.

In due course, Petrus and Francisque (now going by the more simplified Francis) did so, and Ana Lisa put the fledgeling through his paces. He learned a good deal of the secrets of horsemanship under her tutelage, but his indifferent aptitude with the use of sword and lance failed to improve, much to Ana Lisa’s chagrin. Francis would learn that in life, she was the noble-born daughter of Adelais, Marchioness of Turin and Susa, and Hermann IV, the last Babenberg Duke of Swabia. It was a brief marriage, and Ana Lisa was born after the death of Hermann, making her an inconvenient heir to the ambitions of Holy Roman Emperor Conrad II, who wished to give the duchy to his own son, Heinrich. Under imperial pressure, Adalais gave up her daughter’s claims on Swabia in return for a pension, and guarantees that the House of Salian would ensure Ana Lisa’s survival (if not her legitimacy) to inherit some of her mother’s property in Piedmont. She would never be recognised as Hermann IV’s daughter, and indeed she would be something of a non-person, but she would live in comfort and privilege.

Lady Adelais would go on to marry Enrico of the House of Alerimici, who with his brother was co-marquis of Montferrat, briefly uniting the two great northern marches. Just a couple of years later, she was widowed once more, and soon married Oddon of the House of Savoy, uniting Susa with its neighbour to the west. Finally, she would find happiness and a measure of security for herself, at least for a time. With Oddone, and later her sons Peter I and Amadeus II, she would rule Savoy, Turin and Susa for many years. Meanwhile, Ana Lisa would increasingly find herself being raised by governess’, tutors, and family friends, one of whom was Marcia Felicia Licinia. Inspired by the strong will and adventurous spirit of Marcia, Ana Lisa sought to emulate the enigmatic noble lady, and by her age of majority she was an adept warrior, able to speak six languages, and skilled in courtly manners, history, and music.

Ineligible for a good dynastic marriage because of her mother’s deal with the Salians, she nonetheless stood to inherit sizeable holdings. Determined to live on her own terms, she married Domenico, second cousin to her late step-father Enrico of Monteferrat. Domenico was a kindly, rather shy man with a retiring nature and a secret preference for the company other men. He needed the pretense of a respectable life to avoid the notice of disapproving powers, and he was content to abide quietly while his bride spent her time riding, hiking the mountain valleys and peaks, and practicing with her weapons.

They lived well for a number of years, until encroaching boredom made Ana Lisa desperate for change. Seemingly on cue, Marcia returned to offer the Embrace of the Phaedymites to Ana Lisa, who gratefully accepted. Several years later, Ana Lisa would be joined by the aging troubadour known as Petrus de Castries. Together they would form the core of an expanding brood, which over more than a century would bring the descendants of Phaedyme into increasing prominence.

Ana Lisa has served her sire and grandsire ever since. Indeed, she is one of the most prominent of the bloodline throughout south-western France and northern Italy. The secret “Order of Phaedyme” was her brainchild, a mystery cult of sorts through which she and Marcia Felicia Licinia have inducted dozens of influential and informed people into their ever-growing network of progeny, allies, contacts, retainers, herd. In addition to this, Ana Lisa has taken an interest in the destiny of the Aleramici family, and she has advised several of the marquises over the years, especially with regards to their interest in the crusades. She accompanied Guglielemo (William) IV on the Second Crusade, and he and his older son, Conrad, on the Third. Petrus was also her companion on the former, and Francis joined them in the latter armed pilgrimage.

Ana Lisa was particularly close to Conrad, a young man whom she had mentored, and she proudly watched the talented noble rise to become a chivalrous paragon and figure of hope to the people of the beleaguered city of Tyre. She became his unoffical advisor, sparring partner, and bodyguard, which drew her into the intrigues of the Kingdom of Jerusalem. Her satisfaction was immense when he married Isabella of Anjou, the heiress to the kingdom of Jerusalem, which would make him king in short order. After Guglielmo death in 1191, she remained at the court of the Lasombra Prince of Tyre to stay close to Conrad, while Petrus and Francis went south with the army.

She was with Conrad in April of 1192 when the barons of the kingdom unanimously voted for him over Guy de Lusignan, despite the objections of Richard the Lionheart. Guy was given Cyprus as compensation, and Conrad and Isabella began making preparations to leave for their coronation at Acre. Several weeks later, on the eve before departure, Conrad, Ana Lisa, and a pair of bodyguards went to the house of Bishop Phillip of Beauvais. The bishop was a friend, and Conrad and Ana Lisa had hopes of a late dinner, good counsel, and a spirited chat, since the pregnant Queen Regent was indisposed.

Alas, Phillip had already dined, and after a short conversation they left for Conrad’s villa. On the way home, while passing through a narrow street, they were accosted by a small band of Assamites and their ghouls. Ana Lisa fought fiercely, managing to slay both of the Cainite attackers, but not before their blood-borne poisons did their work on her as well. As she slipped into torpor, she saw the blades of the Hashshashin do their deadly, grisly work. Her friend, ward, and lord was dead.

Rescued by her own retainers, Ana Lisa survived the ordeal. She would emerge from torpor years later, not long before news of a Fourth Crusade reached Montferrat and Susa. Her heart was broken, however, and so too was her immortal stamina, stolen by the poisonous blood of the Children of Haqim. In 1204, the news of the destruction of her beloved consanguineous brother, Petrus only deepened her melancholy. In the decades since, Ana Lisa has remained at her estate in Susa, going through the motions of doing her part for the Order of Phaedyme, and frequently slipping in and out of torpor. She retains considerable influence, but her will to use it is slipping away. Although she maintains appearances and puts on the cheery face of old, her fellow Phaedymites know that her ardour is lost, and her ambitions forgotten.

It would seem that she now appears to be a spent force.

Lineage: Ana Lisa counts herself among the 7th generation. She is the childe of Marcia Felicia Licinia, a Roman era diplomat who founded the secret Order of Phaedyme in the 12th century. She in turn is the childe of Phaedyme, who was a female warrior who bound her breast, took on the guise of a man, and marched in the army of Alexander the Great. Phadyme is childe of the nigh-mythical figure of the Black Mother, also known as the “Old Lady of the Ravnos” in some quarters. Cainite historians agree she was the founder of several of the western bloodlines of the Ravnos, and that she fell into torpor centuries ago in France. The Black Mother is the childe of Zapathasura. 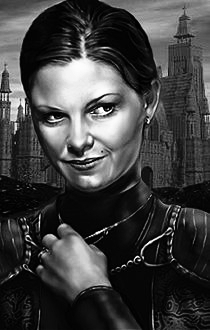