This madman is the sometime companion and protector of Lucita d'Aragon in her travels. He is seer of sorts, motivated to pursue esoteric goals by the voices of angels.

A vagabond wearing piecemeal chain armour over filthy padding as well as a surcoat covered in blood and mud. He is armed with a battered sword and dagger. Blood stains his chin and long blonde hair, which is so unkempt as to be matted and dread-locked. His eyes have a wild, shrewd look.

Like many of his clan, Anatole is an unsettling Cainite. He hears the voices of “God’s angels,” and he has embarked upon a journey to fulfill their purpose. For some time, this involved accompanying Lucia d’Aragon, envoy of Ambrosio Luis Monçada, and Sylvester de Ruiz, on her travels throughout the realms of Eastern Europe and the Byzantine Empire. Directed by his voices, he led Lucita to a certain ruined tower in the Tihuta pass; there to aid the “chosen agents of God” who would uncover “the seed of wisdom”. The presence of the daughter of the dark bishop and the son of the idiot fulfilled the prophecy of Anatole’s clan-mate, Perlina of Bistritz. The two lingered for a few days, gaining a copy of the writings of the mad Antediluvian as well as the translation disk. After his flock of fanatical flagellants arrived, Anatole and Lucia d’Aragon soon elected to move on, with an aim towards taking counsel with Perlina and treating with Radu of Bistritz respectively.

Anatole is a capable swordsman, and is quite strong, tough and quick. He took it upon himself to become Lucita’s mentor in the arts of fighting, though he readily admitted that after several years there was already little that he had left to teach her. She in turn taught him to read from a battered bible, and also instructed him in the basics of court etiquette. The madman says little of his past, other than the city of Paris being his home and that the agents of Prince Alexander drove him from there shortly after the Embrace.

While they were working together, Veceslav Basarab observed that Anatole’s aura is quite unique, being a pale gold rippling with a pattern of white, indicating that he is a deeply spiritual man and something of an innocent in spite of his Cainite nature. Indeed, the Tzimisce’s suspicion that the Malkavian has True Faith was later confirmed when Veceslav later lost control while feeding on one of Anatole’s flock. The madman called upon God and invoked the name of Archangel Gabriel, driving the frenzying Fiend away from the hapless mortal.

Anatole was not present when the Concord encountered Lucia d’Aragon in Venice in AD 1202, but he reappeared in her company during the closing months of the siege of Constantinople in AD 1204. At this time, it was obvious to a number of the coterie that the mad prophet’s following had increased markedly. Not only had he gathered a throng of devout but less manic mortals around his usual band of flagellants, but a number of Cainites appeared to have taken him on as a spiritual counsellor as well. Indeed, Anatole appears to have become an Ashen Priest of the via caeli.

As the city fell, the Lasombra delegation and their Malkavian ally were very much in damage control, but again they failed to turn aside the destructive path of Duke Guy and his followers. After the city fell, Lucia d’Aragon and Tommaso took nominal part in the sack, but were far more restrained than the Franks and the Venetians. For his part, Anatole sought only to mitigate the worse excesses of the crusade, and worked to save the lives of the mortals caught up in the disaster. True to his nature, Tommaso Brexiano fled the city shortly thereafter, but Lucita remained to see what she could salvage of the disaster for her masters.

Anatole was uninterested in participating in her banal schemes, and he instead joined the Nosferatu elder, Malachite, who sought to bring hope to the Cainite refugees outside Adrianople. The ancient Orthodox prelate and the most unorthodox Ashen Priest rallied the desperate and broken refugees, then moved them on to the West, away from the forthcoming troubles between the bellicose" Latin Empire":https://en.wikipedia.org/wiki/Latin_Empire of Byzantium and the resurgent" Empire of the Bulgarians":https://en.wikipedia.org/wiki/Bulgarian_Empire#Second_Bulgarian_Empire. Rumour has it that Anatole left the pilgrimage near Aquilea late in 1207, but that he returned to it periodically to offer counsel. Later word filtered to the Concord that Anatole has returned to the realm of his birth, that he successfully debated the nature of the Curse of Caine against a prominent Parisian bishop of the Cainite Heresy, and that he once more leads the pilgrims of the East in their new home in the West.

Lineage: Childe of Pierre l’Imbecile, childe of Gaspar Desmarais (d); he has been told that he is of the line of Tryphosa, though he has no idea who that might be. Anatole is thought to be of the 10th generation, but unsavoury rumours have circulated of late that the Malkavian has been accused of having committed diablerie on a number of occasions. 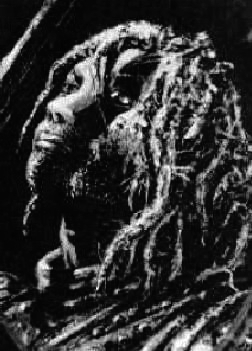