Childe of Vassily Taltos, this Ravnos wanderer and meddler found himself in league with Theophanos of the Epirote Lexor Brujah. He was an occasional member of the Ashen Band, and met his end assisting them.

Andras had the look of an adventurer, someone used to spending his life outdoors and living on the bounty of his wits. His frame was a combination of a tangled mess of lean, tough, sinewy muscle and the dexterous, deft, fine motor skills of a craftsman. Typically, he dressed in a colourful, eclectic fusion of Greek, Turkish, and Hungarian clothes, and he tended to draw the eye wherever he went. He was armed with a simple belt knife, but in a pinch he also showed himself to be a more than deft swordsman.

Among the first of the Roma to be born within the borders of the Kingdom of Hungary, Andras was also among the first of his people to find his way into the ranks of the local Ravnos. For many years before the time of his birth, his family had been among those allied kumpaniya attached to the Alexandrite known as Vassily Taltos and his own elder sire, Sanser. On the business of their immortal patrons, their route frequently took them from the gates of Constantinople to those of Thessalonica, and beyond to the lands of what is now the Second Empire of Bulgaria and the nigh-anarchic lands of Cumania. At the time of Andras’ birth, they had been compelled to go yet further to the benighted land of Transylvania, and he was born not far east of the Siebenburgen settlement of Hermannstadt.

He and his cousin Camlo were always inseparable growing up. Raised for much of their formative years visiting dozens of cities and towns in Greece, Bulgaria, Hungary, Croatia, and Transylvania, even as boys they found themselves frequently interacting with their uncle Vassily, and it was entirely normal for them to have a vampire in their midst. To hear the loquacious fellow tell the tale it seems that to the Romani, a shilmulo (their word for the undead) can still be considered family and friend (or phralmulo), to be respected as a dangerous ally but never to be seen as a master. While the Ravnos went about his work serving as an intermediary and messenger between the intermittently warring clans of the Hungarian Ventrue and the Tzimisce, his company made themselves useful as tin-smiths, horse-traders, and entertainers, seeking an honest living wherever they could, and making a dishonest one when they could not. Always, Andras and Camlo were in the middle of some adventure, some mischief, or some grift.

Indeed, they were always more like brothers than cousins, with Andras’ smooth touch complimented by Camlo’s strong arm. Neither of them desired the Becoming at the fangs of their phralmulo uncle, nor saw it in their futures. Instead, they were ear-marked as future leaders of the allied families of the Taltos, Charanos, and Taragoš families of the Roma peoples. The only rivalry between them lay in Camlo’s impatient desire to be picked as the leader, and the fact that Vassily and his childe, Marta, both seemed to favour the handsome, silver-tongued, and patient Andras. Still, the rivalry never degenerated into enmity so much as a healthy, good-natured competition. As they became adults, using his superior strength and knack for hand-fighting, Camlo became the protector of the kumpaniya, while Andras became the day-time negotiator, very much in Vassily’s own image.

In 1211, the three families came together for their bi-annual celebration outside the city of Thessalonica. The day after their arrival, they encountered the Black Lion Mercenary Company. Their spokesperson, Stiguld, was intrigued by the strange Easterners, whom he had never before encountered, but he nonetheless demanded that the Romani famlies move from the Lions’ customary camping spot. Andras and Camlo refused, but sought to reach an accommodation, which was in turn refused with an off-hand threat. The larger gypsy was indignant that the warriors would so casually bully families of peaceable travellers, including many women and children, and said as much. When Stiguld returned that perhaps the women could entertain his soldiers, Camlo’s temper flared and he challenged the English mercenary to a fight.

“Is this how your warriors treat good men, women, and children here? Do they make victims of them simply because they can? Then I say I am a stronger man than you! You look strong. Are you their leader? Perhaps I should beat you into the ground and show your men that I am a better man than all of them! Threaten and mock our women again, and you shall see!”

Amused and intrigued, Stig then gave way, inviting the two gypsies to come to the Red Cock tavern inside the city and drink with him. That is, if they had a purse of moneys to match his own. Surprised, Andras and Camlo agreed, and the situation quickly defrayed. Following the lead of their spokesperson, the Black Lions headed back a short distance, to the beach front near the mouth of the Gomaropnichtis river, a less accessible site to the city, but no less worthy.

During the ensuing drinking bout, Andras and Stig did their best to drink the other under the table, making a game of giving as little away as possible about themselves while learning as much as possible about the other. Camlo and Torfi, Stig’s second, stood back quietly, drinking slowly and keeping their eyes warily on the other. Others in the tavern looked on with interest, including its proprietor Vyron, the Malkavian known as Ulfe, the Phaedymite Francisque, and Odda, the Gangrel captain of the Black Lions. After a couple of hours, Stiguld’s near-legendary drinking prowess appeared to desert him, and he gave away a little too much. Letting slip that he was much older than he looked, he could see that at his drinking companions had divined his true nature as a ghoul. Seeing the game was up, the drunken Lion balled his fist and threw a punch at Andras, who was happy to reciprocate. Torfi and Camlo also squared off and around them, a general bar fight broke out among the rough patrons of the Red Cock.

Andras appeared to be getting the upper hand once again, smashing a chair over Stiguld when the Anglo-Saxon lost his balance and fell. Suddenly, a third gypsy, this one older, materialised out of thin air and viciously drove his dagger into Andras’ liver, twisting the blade viciously as he tore it free. Screaming the name “Irendo!” in rage and alarm, Camlo abandoned his brawl with Torfi and attacked the older gypsy with all his considerable skill. He did not land a single blow. Smiling with his fangs, the now-revealed shilmulo dodged Camlo’s dagger thrusts with playful ease for several exchanges, before slamming the heel of his hand into the young bruiser’s elbow. His arm shattered by the preternatural strength of his foe, Camlo slipped to the floor in agony. If not for the intervention of the other Cainites in the tavern then, he would have died. Unfortunately, Andras was not so lucky.

The suave negotiator was mortally wounded, beyond the scope of even the blood of the undead to heal. Instead, Francisque directed the other vampires to take the expiring young Rom to Sanser, who had transported the Toulousain Ravnos to Thessalonica that very evening. Ulfe scooped up the dying youth, and they ran for the Ravnos elder’s boat. There they found Vassily Taltos as well, in conference with Sanser, and the two Alexandrites were stunned and grieved to find Andras at the very threshold of death. Sanser gave Vassily his blessing to bring his dying nephew across, if he too gave his assent.

Though he had never desired the Embrace before, the young gypsy discovered that he was unwilling to die just yet. Andras chose undeath. As Vassily carried out the deed, Camlo looked on in obvious, undisguised, mute horror. The other vampires watched, with some surprise, as Camlo almost rejected even the healing vitae of Sanser too, but the elder Ravnos assured him that it would be just once, and he would soon be cleansed of the “taint.” Afterwards, he was returned to shore, but Andras was spirited away to begin his tutelage at the feet of his sire and grandsire. He would not return to see his mortal kin for four years, and when he did, he found that Camlo had become chieftain of their kumpaniya. After some careful words, and significant reservations, Camlo allowed Andras into the camp, and the two of them gradually set about renewing their friendship. They have travelled together ever since, and Andras appears to be careful indeed not to outwear his welcome.

Their road frequently took them through the Bulgarian Empire and the Despotate of Epirus, where Andras became entangled in the intrigues of the resurgent Lexor Brujah family. In particular, the wise and charismatic merchant known as Theophanos managed to find his way into the good graces of Andras, and it was not long before the Ravnos found himself in the employ of the older vampire. Andras was close-lipped concerning how he actually came to serve the Brujah, or why he did so with such faithfulness, but it was clear that he saw Theophanos as not just his employer but also his friend and mentor. It was at the behest of the merchant that Andras made himself available to the Ashen Band during the course of the Hungarian Crusade to the Holy Land, and he served them quite ably as their eyes on the street of Acre as they involved themselves with numerous intrigues and adventures in the region.

In particular, his skill set complimented that of Marius, the stealthy and saturnine Lasombra, as the two of them sought to get to the bottom of the truth of the free-willed ghouls that served King John of Jerusalem and also the extent to which the hunter Gauthier de Dampiere had succeeded in recruiting like-minded Truly Faithful brothers from among the Military Orders.

Unfortunately, while staking out the Monastery of the Apostles, a small priory near the larger Church of his namesake saint, Andras was discovered and taken by a band of hunters led by the astute Templar hunter known as William of Bedford. Soon after, his friends among the Concord managed to track down their missing companion and his captors to the Priory of Saint Thomas of Canterbury in Acre. Tipped off by Duqaq ibn Jamil, a Rayeen al-Fen ally of Prince Etienne, they discovered that Brother William had safe harbour from his countrymen at the small monastery. The Ashen Band initiated a rescue mission but sadly they were too late, for the old Templar and his subordinates had already interrogated Andras and dispatched him to the Final Death.

After a difficult fight, bloody vengeance was exacted by the Ashen Band. After stabbing Brother William in the back, Kelemen in particular left a gory spectacle of the venerable Templar on the small altar of the crypt beneath the priory chapel of St. Thomas. Brother Karl of the Teutons and Roberre of the Hospitallers were also ignominiously slain by the incensed vampires. They then gathered the ashes, clothing, and jewellery of the Rom vampire in order to return something of their friend to his mortal kin.

Lineage: Childe of Vassily Taltos, childe of Sanser, who is the childe of Tibaldo. Andras and his kin apparently belong to something called the Alexandrite jati. He is of the 9th generation. 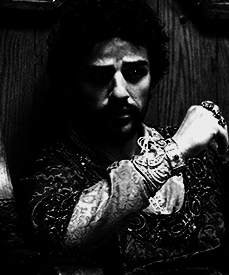