Former Quaesitor of the Antonian Ventrue, and princess of the famed Imperial House of the Comneni, this ancilla now rules as Prince of Nicaea.

This lady’s beauty defies description, a platonic ideal of royalty and perfection of line and form. Her chestnut hair is long, wavy and carefully styled, and her eyes an intelligent, cool blue. She wears the latest fashions of the Byzantine Court.

Note: Although Anna was Embraced at the age of 70, she has had her colleague, Symeon of the Obertus Tzimisce, use his flesh-crafting arts to not only restore the beauty of her youth but also to enhance it beyond anything a mortal could hope for. Before the Great Sack of 1204, she was counted as one of the beautiful Cainites in the city. Toreador are often dumbstruck in her presence.

(Expanded from the character and information presented in Constantinople by Night, p. 113, Dark Ages Europe, p. 171, the White Wolf wiki, and the Wikipedia article).

The life and deeds of Princess Anna Comnena are well known. She was the daughter of the legendary Emperor Alexius Comnenus, instigator of the reforms that led to the last great renaissance of Byzantine military, bureaucratic and financial expansion at the turn of the 12th century. It was Alexius’ appeal for aid to Pope Urban II against the invading Turks that sparked the First Crusade, and led to enormous swathes of territory being regained for the empire.

Famed for her beauty and intelligence, Anna was Alexius’ heir for many years and expected to inherit the throne and rule alongside her husband, Nicephorus Bryennios the Younger. Unfortunately for her imperial ambitions, Anna’s younger brother, John, usurped the throne after her father’s death. Many years of intrigue followed, culminating in her eventual exile to a convent. There Anna penned the famed Alexiad, an account of her father’s reign, and she eventually made her peace with her brother before his death in AD 1143. Her own passing ten years later sparked a wave of mourning throughout the empire.

What is not known by the chroniclers is that her mother, Irene Ducaina, was the distant descendant of a powerful Cainite of the Antonian family. It was Ducas who secretly championed and cultivated Anna’s ambitions against John, who was likewise the pawn of the ancient general Belisarius. This particular intrigue was drawn out over much of the rival sibling’s lives, with each Cainite patron constantly seeking the endorsement of Basilieus Caius for their candidates for leadership of the empire. Ultimately, John was killed in an accident but some say he was assassinated in Cilicia by one of the hashashyin, or perhaps even one of the dreaded Assamites. In any case, Anna’s time was past and she resigned herself to make peace with her family and await the end. With the loss of his dear protege,John II, and the military genius that went with him, Belisarius also withdrew from the power games of the Antonians. For his part, Ducas finally gained permission to give the Embrace to Anna, whom he had long admired from afar.

Nicepherus and his followers instantly took a dislike to Anna, seeing her as a threat to their own supremacy in the eyes of Caius. She was initially given the ancillary role of Quaesitor Secretarius to the maudlin ancilla Romanos Alyates, Caius’ own progeny, before being thrust into the position of Quaesitor when Romanos committed suicide on Easter morning in AD 1162. After a life of imperial intrigue, Anna found herself well prepared for the role and has excelled the late Romanos in nearly every way.

She proved herself to be up to the task of keeping pace with her colleagues Petronius and Symeon, both her elders by many centuries. Her lesser known position was that of Chamberlain of House Antonius, which granted her oversight of the activities of all of her fellow Ventrue in the city save Caesar Magister Nicepherus and Basileus Caius himself. While the Antonians presented a unified front to the city, it was known that some intrigue existed between Anna and Nicepherus regarding ultimate night-to-night control over the city. The disposition and loyalties of the Antonians regarding this matter were largely unknown, except to say that Ducas’ lineage (excepting the elder himself, who was rather ambivalent) supported Anna and Nicepherus’ lineage supported the Caesar Magister. Caius and his advisor Alexia Theusa did not show favour to either faction, nor did Belisarius, who was largely retired from Cainite politics and society.

Anna was aloof from many of the Cainites of the city, preferring to retain the distance of an imperial daughter of the purple. She instead used her ghouls and her devoted secretary, Theodorus Kolettis, as her emissaries much of the time. Her rare public appearances in the Elysiums of the city was cause for much gossip even among the younger Cainites of Constantinople, who remained in awe of her august reputation.

It is known that she disapproved of the attempts of Autokrator Natalya Syvatoslav and the Lexor Brujah to flex their political muscle in the city. The Concord indirectly took part in the intrigues that bolstered the power of Natalya while simultaneously weakening that of Anna’s childe and protege, the Domestic Prefect Irene Stellas. Irene’s position became extremely shaky in the Antonian hierarchy, and Anna’s own position was thus weakened. While she displayed no overt enmity to the coterie over their political manoeuvrings, they were wise to take no comfort from that fact. After all, her ability to hold a long grudge is a matter of historical record.

During the long and twisted course of events that led from the failed defence of the city in June of 1203 to the Great Sack of April in 1204, Anna maintained her rivalry with Nicepherus, but unlike the Caesar Magister, Anna seemed quite cognizant of the possibility that the crusaders might breach the walls if hostilities broke out once again. Within tribunal meetings and at Elysium, she and her followers spoke of the need to organise against that possibility, but they were mocked by Nicepherus’ faction and ignored by Caius and the others. Only Belisarius took her seriously, and she finally had him on her side. Together they began to direct their fortunes and their influence to see the defences of the city bolstered, mercenaries hired, and patriotic soldiers from nearby provinces smuggled into the city. Even so, the two of them readily acknowledged that their efforts weren’t nearly enough. More allies were needed.

Unfortunately, there were few in supply. Overtures to the Lexor Brujah were met with demands for concessions that would destroy her credibility with her fellow Antonians. The expected lack of success in that quarter also hampered her attempts to restore good relations with the Baron’s Gangrel and the Malachite Nosferatu, although the former still cooperated on some matters. Symeon and his secular Obertus were willing to work with her to a certain extent, but their numbers were small compared to the more insular Gesudians. In truth, it was only Petronius and reformed Michaelites were ready, willing, and able to work with Anna’s faction. As the crisis worsened, the two coteries did indeed work well together; the courtly manner and wealth of the Toreador and the management and bureaucratic acumen of the Ventrue proved quite complimentary. Among their followers,
Petronius’ street savvy Scholai guards perfectly complementing Belisarius’ Varangians, directing them towards trouble where their muscle was of most use.

Alas, it was all for naught. The city fell in April of 1204. Anna was present when her basileus, Caius, was told that the enemy were within the walls, and like everyone else in the throne room of the Great Palace, she was forced to flee for her very existence from his thunderous frenzy. Like the other Antonians, it would appear that she never really thought that it would happen; her faith in Belisarius and his military genius blinded them to the quality of the veteran crusaders and the lack thereof among their own forces. Also like many of the city’s Cainites, she then had no choice but to keep her head down, hide, and hope for the best. She and her coterie weathered the storm of the Great Sack intact, but their wealth, their havens, and their people did not.

Much of Anna’s influence was predicated on the legion of nobles, bureaucrats, and military men that she had spent decades carefully cultivating by means both supernal and mundane. When the fires were finally extinguished and the dust had settled, few of these worthies remained to assist her in pressing her ambitions over the Antonians and the Queen of Cities. Their wealth plundered, their reputations ruined, and their positions invalidated, most of those who survived fled the city in ignominy. Of her pawns, only the brothers Constantine and Theodore Lascaris parleyed the perils of the times into greater power, but even then, the latter was lost in battle against the Latin Empire less than a year after the Great Sack. Worse, her rival Nicepherus had managed to keep many of his assets intact; he now made it clear that not only would he rule the remnants of their family henceforth, but that Anna’s contribution was not welcome.

Anna seemed to struggle on, but she must have realised that her position was untenable. In January of 1205, vampire hunters mounted an attack upon her new haven in a dilapidated mansion in the district of Arcadius. The aggressors were mortal or perhaps ghouls, but they were well-coordinated and well-prepared. If they had chosen their moment at noon rather than an hour before dawn, they could well have succeeded. Anna barely survived, and her bodyguard, Theodorus, was driven into torpor protecting her. The hint was taken, however, and she quit the city that very night.

Her childe, Irene Stellas, elected to remain behind to keep an eye on the city for Anna but for now, the former chamberlain has set her sights on restoring the empire through means elsewhere. She set herself up in the surging Empire of Nicaea, and backs her one-time associates among the Lascaris family and their allies. The prince of Nicaea, Romanos, attempted to prosecute his sire’s feud against her there, but he soon found the new arrival was far more popular among his own subjects than he. Unfortunately for Romanos, she was also considerably more capable. By 1208, with her strong right hand Theodorus once more risen at her side, she had ousted him and taken his place with the popular acclaim of the Cainites of that city. A dozen others, either exiles of the Dream or Romaioi patriots, have flocked to her banner in the years since.

She has ridden the wave of Nicaean ascendance, and is already accorded more respect than any other prince in the eastern cities of the fractured empire. As her power has grown, it has come as no surprise to anyone that her gaze is fixed firmly upon the Queen of Cities. Anna Comnena is determined to finally claim her inheritance, even if it is a century later than she had once intended. 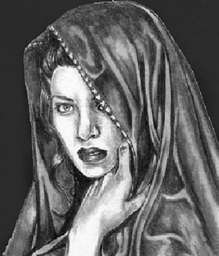