The least "rough-around-the-edges" of the Baron's Gangrel, Anna served as something of a diplomat for Thomas Feroux. Now that her family has fallen, she is at loose ends in Constantinople.

A well-presented, good-looking young woman of Greek extraction. She has shoulder length black hair, warm brown eyes and a nose ever so slightly too big for her face. Her disposition is less friendly than yesteryear, with a distinct melancholy worming its way into the corners of her eyes and the turn of her mouth. The young lady wears the dress is that of a well-to-do Byzantine scholar or merchant, though it is distinctly tomboyish in it’s cut and style and it has seen better days. She is unarmed.

Anna is passionate about the Dream, perhaps even more so than her liege and sire, the Baron Thomas Feroux was. Before the city fell and the Dream was left in ruins, she was in the habit of speaking openly and at length (sometimes to the point of being boorish) about the greatness of Constantinople: her gilded buildings, extraordinary treasures, and glorious history, the proof that Cainites could be more than parasites if they but worked together for the glory of God. Anna was also one of the baron’s most useful agents, as she has a quality that the rest of his people lack, namely that of finesse. The breeding of her mortal years lends her the ability, no matter how much she might wish it otherwise, to observe something of the forms and grace of polite Byzantine society. In truth, however, she was the first to admit that the diverse and intricate minutiae of the Cainite courts were a touch over her head but she always did her best.

Thus, even though she could be a little awkward at important Trinity family functions, Anna Sgorina was sometimes called upon to serve the baron as his mouthpiece. She was also frequently called upon to treat with allied Gangrel broods of the provinces, and to carry messages on behalf of the Obertus Order. On these missions, she had been known to travel as far west as Italia Romagna and the Balkans.

Anna was brought across in the early years of the 12th century, before she had truly experienced the fullness of womanhood. She has said that she was of a good merchant family, and that she was well-tutored in the Greek and Roman classics as well as the quadrivia, but that she had few prospects other than the hope of a reasonably good marriage. Of the circumstances of her Embrace she says little, except to say that all has turned out for the good. When speaking in guarded company, she loved to discuss the rare and treasured tomes of the Library of the Forgotten.

An infrequent correspondent with Sir Gunthar von St. Wolfgang, Anna found his awkward reticence towards the Dream quite silly, given the fact that he was so obviously affected by it. She had a fairly warm disposition towards he and Iulia, Sir Conrad, and Veceslav Basarab, owing to the service they provided to the city during the events surrounding the murder of Adrianna and Juliano of the Narsene Lasombra.

It was Anna, with Baron Thomas’s blessing, who asked Sir Gunthar to gather his Concord and head to Venice at the outset of the Fourth Crusade. She was heading there herself, and knew the Dream would need allies that understood the crusader mind-set in ways she could not. Indeed, Anna was deeply worried at the burden she had been given, and knew she was woefully out of her depth. Further, she hoped that the Concord would serve as a sort of fifth column within the negotiations, emphasising her arguments from a position of apparent opposition. The plan was a good one, but she undermined it herself through her lack of experience in the courts of the West. She even unintentionally, perhaps fatefully, drew the attention of many of the Cainites at the Council of Venice to the untold wealth housed in Constantinople. To this night, she blames herself for the deviation to her beloved city on her own poor oratory at the council.

Nineteen months later, Anna would work with the Concord once again. She was present at a last ditch effort to draw the crusade away from her city — The Council of Chalki. The meeting appeared to be reaching a successful conclusion, with the Romaioi delegates successfully drawing the crusade delegates into accepting a vast sum that would greatly ameliorate the financial burdens of their army, when a force of mercenaries attacked the gathering. Petrus the Troubadour and Father Pietro Ancini, both instrumental to the peace process, were slain in the attack, thus dooming the council to failure. Bitterly resigned to fighting for the city at last, Anna left with the Romaioi delegation and prepared herself for the renewed war to come.

Like all of the Baron’s Gangrel, she fought hard for the city, and was badly wounded by a foreign clan-mate (Rollo) during the attack on the Sea Walls of the Golden Horn on the 9th of April. Still recovering, she was present several nights later during the ill-fated assistance rendered by her family and the Concord to the burning Monastery of St. John Studius, where she was wounded once again by a crusading vampire-hunter. And when her sire and lord discovered the well-meaning duplicity of the Malachite and St. Ladre families, she watched his sanity, already teetering on the brink from the loss of Gesu, slip away. Driven by grief and wrath, Baron Thomas declared Malachite and his followers to be enemies of the city and the Dream, henceforth to be attacked on sight.

She was hesitant, like several of his knights and squires, but she had seem him rage before and he had always recovered. But then he followed through on his wrath when Malachite reappeared. The revered Nosferatu was attacked, imprisoned, and abused, his pleas for mercy and reason ignored. For the first time in her 100 years, Anna was at a loss. Her beloved, infallible sire had lost his way. He was in the wrong. He was mad, and his people had shown that they would follow him into madness.

Several of them gathered later that night to discuss how to proceed. Anna pleaded that they must approach him in private, to bring him around through appealing to his honourable and reasonable nature. Justinian was scornful, returning that reason and honour had fled Thomas, and that he had lost the right to rule them. Verpus stalwartly argued against overthrowing him, but that they must assist Malachite and his ilk in secret until the baron saw the error of his ways on his own.

While they spoke, the Cainite Crusade discovered the secret fortress of Petrion. Guy of Provence led the attack himself, backed by his own coterie, nearly thirty other Cainites, and hundreds of ghouls and mortal soldiers. All of the Baron’s Gangrel and their own retainers, their differences and misgivings forgotten, rallied to the defence of the citadel. The fight was bloody and hard-fought. Many of the attackers died, and more fell broken and cleaved by sword, axe, fang and claw. But ultimately Guy and his people carried the night, and the citadel was taken. Those of the Baron’s Gangrel who did not flee were captured or destroyed.

For her part, Anna escaped. Taking the bat form, she fled the field when she saw Baron Thomas, surrounded by torch-wielding knights, succumbing to Rötschreck and doing likewise. The few among his family who regrouped the next night, dispirited and angry, saw a revolt in the ranks. Justinian and Thomas exchanged harsh words, which led to the baron losing his temper and attacking his vassal. The giant warrior responded with a furious assault, and none among the Gangrel saw fit to stop him from beating Feroux into torpor. Justinian then said he would not follow a madman who cast his bonds of friendship into the jaws of the Beast, then he left. The others watched him go, then one by one they left too.

And just like that, the Baron’s Gangrel were done.

It is said that only Anna Sgorina was left to stand over her sire’s body, imploring them all to come back as they walked away. If so, it is likely that she alone knows where he is now, whether he be active in exile or still in torpor from the furious beating of his former knight and friend. Whichever the case, Anna left Constantinople soon after and did not return for more than ten years. When she did come back, she took the offer of haven presented by Gabriella of Genoa and settled in the district of Galata, beyond the reach of the agents of Prince Alfonzo. 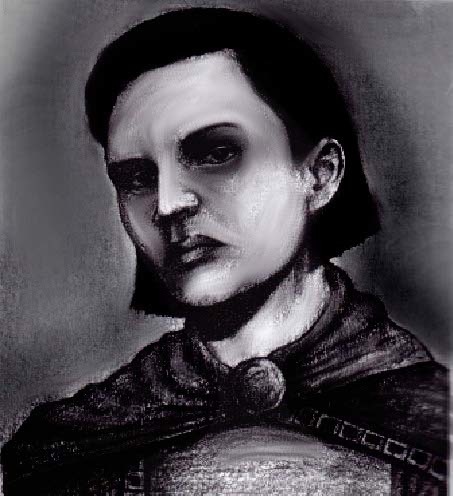