A trader of information and favours, this low status Toreador plies the ports of the Mediterranean, seeking advantage and a niche to prsoper.

A Norman with a healthy build, dressed tastefully in the fine cloth befitting a merchant, though his signet gives him away as a noble of some sort, perhaps a landed knight. He has handsome features, with a strong nose and jaw, deep-set blue eyes and well-groomed, short dark hair. The Norman is armed only with a dagger.

Ansen of Normandy has a public identity as a dealer in rare spices and a transporter of pilgrims and travellers (including, obviously, the undead). He is most well known in Cainite society as a quiet trader of information and favours. And finally, in recent years he has established a reputation as occasional procurer of rare slaves, particularly for those Cainites seeking exotic additions to their hives. In the early months of AD 1203, he was recommended to the Concord by Bartolemeo Giordani, the newly instated Prince of Zara, who had partaken of Anson’s services himself in the recent past.

The Norman, who appears to lack the talent at artisanship for which his clan tends to grant the Embrace, has chosen to make any and all ways with which he might be “useful” as his stock in trade, his craft, and his passion. Whether his clanmates will ever see his point of view is doubtful, to say the least.

Ansen, by his own admission, was a landless knight who followed the First Crusade looking for land, wealth and acclimation by his peers. When the walls of Jerusalem were breached by the crusade and the bloody, maddening, slaughter began, he found none of those things. Instead, when he came to his senses, he was a Cainite. While Ansen appears to recollect nothing of the murderous rampage that ensued, he claims the late Toreador knight known as Sir Tomas de Bouchard as his sire. While Ansen cannot be certain, he knew Sir Tomas well enough, had an inkling of his true nature, and was in his company when the gate was breached.

Regardless, Ansen has apparently spent the better part of his existence looking for a place to call his own. He currently owns a merchant nava, La Danseuse Lune (the Moon Dancer), and makes his way amongst a number of ports of the Mediterranean to seek his fortune. Whether that be physical domain or merely the status that comes with recognition by his undead peers is immaterial to him, so long as he finds acclimation somewhere. During their brief sojourn with Ansen, the Concord availed themselves of the knowledge that he has friends in Jerusalem, Iraklion, and Alexandria, and that he has been known to weigh anchor also at Thessalonica, Tyre, Haifa, Jaffa, Rhodes, Limassol, Famagusta, and St. Symeo*. In short, he knew the waters of Eastern Mediterranean well enough to set them down nearly anywhere.

Rather than accept coin for transporting the Concord from Zara to Corcyra and Constantinople, he instead asked that the cost of their passage would be considered paid if they could introduce him to certain powers that be in the Queen of Cities. He went on to explain that the great port was a nut that he has had some difficulty in cracking, and that he knew they had significant friends of their own there. Veceslav Basarab and Iulia were content to do so, and the bargain was struck.

In the wake of the Great Sack, Ansen was one of many Cainites who established himself in the new order. Specifically, he grew his business to add a touch of slavery to his already bustling trade in transport, information, and favours. If offered significant incentive, he obtains exotic slaves from the blocks of Alexandria, and transports them to secret markets in Constantinople, Iraklion, and Tyre for further transaction. He has a preference for more honest work, of course, but he is nothing if not mercenary in temperament. He is, after all, a merchant.

Ansen of Normandy was among the many that accepted the proposition made by Content Not Found: theophanos in 1217. Once more, the Moon Dancer transported crusaders, this time to Haifa rather than Constaninople. Unlike many others, Anson chose to stay for a while, and soon after he was one of the first Cainites in nearly 1000 years to step onto the docks of Acre.

Lineage: Childe of Sir Tomas de Bouchard (d), childe of Henri de Bernay (d), childe of Robert Marners (d); Unknown beyond this. He places himself in the 9th generation. 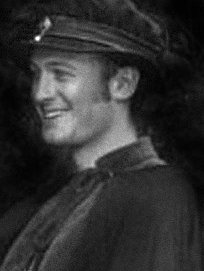