As the Michaelite Muse of Sculpture, this troubled elder was responsible for directing the physical beautification of the Dream as well as over-sight of the Guild of Architects. He is active in the city's new order, but far from influential.

A dignified old man, sporting a full white beard, bushy eyebrows and a fringe of wispy hair. His dark brown eyes seem to stare through people, floors and walls alike, as if he were lost in thought. He is animated for his advanced age, and looks like he is in good shape.

(Expanded from Constantinople by Night, p. 105, the White Wolf wiki, and the Wikipedia article).

Anthemios of Tralles was an esteemed professor of geometry and an extraordinary architect, best known for his collaboration with Isodore of Miletus to build the Hagia Sophia. His work showed an intuition and artistry that inflamed Michael’s passions, but the methuselah understood that Anthemios could accomplish far more for the Dream during the day and so he delayed giving him the blood. The mathematician was not given the Embrace until he neared the end of his natural life, and inspired by Michael’s guidance, he attacked his new duties with the fervency of a true believer.

For centuries Anthemios performed his duties with skill and flair. He even discovered that he had a talent for politics, and proved a foil for Petronius for a very long time, even serving a few stints as Quaesitor. While considerably more autocratic in the execution of his duties than his fellow muses, few could argue with his precision, profusion and organisation, given Constantinople’s reputation as a city of architectural marvels. He also maintained a broad correspondence with both mortal and Cainite architects, including the Toreador Elsh of Jerusalem and, more recently, the Nosferatu Zelios. Anthemios has given the Embrace more than any other Michaelite Muse, and many Toreador spread throughout the empire, the Levant and North Africa count him among their ancestors.

Still, his primary focus was never so much on the empire as on the beautification of the Queen of Cities herself, and Anthemios pursued this goal single-mindedly and, some say, tyrannically. Through the auspices of his craft guilds, he orchestrated great works, but he also sometimes stifled the creativity of his minions through his own overbearing directives, particularly in recent centuries. Like many of the Michaelites, the Muse of Architecture had not been quite himself for more than a century leading up to the Great Sack. He no longer displayed any interest in Trinity politics, nor did he seek the company of his fellows. When he did socialise, he often appeared distracted and seemed oblivious to those who sought his attention, mumbling a plethora of seemingly unrelated algorithms while staring at walls, arches and columns.

Anthemios attended the Antonian blood feast in the Concord’s honour. However, in his now customary manner he ignored overtures by each of them when they attempted conversation, staring through them and appearing confused. Few noticed when he abruptly departed the celebration.

Throughout the events leading up to the Great Sack of 1204, Anthemios’ demeanour changed not at all but suddenly, in the wake of the Final Death of the Patriarch, he seemed to abruptly snap back into focus. Unprepared for the unthinkable, the Michaelites fell to pieces. While Petronius and his new ally Eletria disappeared, Gregorius perished, and Pakourianis and Paul descended into inconsolable grief and hysteria, Anthemios appeared to come back to himself for the first time in many, many years. He saw the sorry state of his brothers and sisters in the family clearly, and he quickly stamped his authority on the coterie that had been dubbed the Reformed Michaelites, which was already floundering without the guidance of Petronius.

Presenting something of a united face, Anthemios and his new coterie then sought to save as many of his broken fellows as he could. Using the mighty powers of his Presence discipline, he Summoned as many as he could, and hid them along with still loyal mortal members of the craft guilds in previously unrevealed chambers and tunnels within buildings that he had designed over the centuries. Not all could be saved, and the suddenly lucid elder was grief sticken at seeing so many of his works destroyed and looted, but he kept to his purpose with uncanny, mathematical precision. Indeed, it was almost as if he had been preparing for the disaster for a very long time.

As a result of his actions, the body of the Michaelite family weathered the Great Sack with an unusually high survival rate for the Romaioi Cainites. Once the fires were out, and the bleeding had stopped, Anthemios then announced his plans to work with the conquerors in order to find a place for them in the new order, at least until the crisis was past and the invaders could be cast out. The city had been rent asunder, and the Michaelites and their craft guilds were needed to restore it.

Unfortunately, their guilds were largely compromised by the previous depredations of the Children of Judas and beyond that, many members had either been slain or fled the despoiled Queen of Cities. Finally, all of the wealth lay in the hands of the Latins, not the locals, leaving the Michaelites little recourse with which to act on Anthemios’ new vision. Furthermore, few of them had the desire to do so. While they were grateful for his existence, most were too overcome by grief and shock to do much of anything, and those that were not had little desire to be subjects of whatever Latin tyrant would take the place of their late archangel.

Despite his rediscovered drive, Anthemios just wasn’t able to sell his new vision. Prestation was recognised, and those Michaelites that remain in the city acknowledge his preeminence, but they are a spent force, and the former Muse of Architecture has come to realise it. Other powers took the throne, and he has reluctantly resigned himself to work beneath them instead of as their equals.

Already he grows tired, his energies spent in almost pointless attempts to gather the necessary funds and patrons to do his work. His beloved buildings, even the Hagia Sophia, had been damaged and stripped of valuables, and the new order seems less than capable of restoring them. Frequently, he doesn’t appear in Elysium for weeks at a time, and when he does his pride is humbled by the derision of the Latins. More than one rumour has made the rounds that Anthemios of Tralles is giving up, and that he will soon either leave the Queen of Cities or take the solace of torpor.

Lineage: Childe of Michael the Patriarch (d), Childe of Arikel. Anthemios is of the 5th generation. 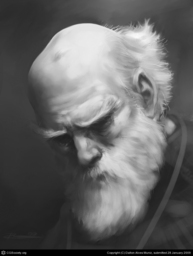