A skilled demon hunter and sorcerer, this Brujah is the companion and sometime student of the mighty Salubri Warrior, Maluziel.

A short, bandy legged man with pale olive skin, a light beard and long, black hair dusted with grey. He dresses in the manner of a wealthy merchant, sporting robes and jewellery of Byzantine make; his short, broad bladed sword and long dagger are ornate and of superior construction, but scarred with use. He has very intelligent, very black eyes, and a heavily lined face that lends him a wise air.

Like his companions, Sir Simon of the Order of Chanticleer and Maluziel, the Salubri Warrior, Argus first encountered the nascent Concord on the road between Vrsac and Timișoara in AD 1197. The least combat-worthy of their company, Argus looked to be facing certain Final Death when the possessed Sir Conrad de Monreal rushed him in a diabolically fuelled blood frenzy. Luckily, Maluziel intercepted the young Brujah and subdued hm before any serious harm could be done. With the demon inside Conrad cowed by the might of the elder Salubri, the coterie of demon-hunters treated with the Concord and sought to discern the Brujah’s fate. At their wits end to contain the ravenous knight, the coterie deferred to the powerful trio’s experience (as well as their obvious power).

Maluziel was in favour of giving the poor knight a merciful Final Death, while Sir Simon worried that a good soul such as Sir Conrad might be condemned to Hell if the demon was not first removed. The deciding vote was left to Argus, who felt that a warrior of such skill and faith as Conrad would be a great asset on their hunts of the Baali and other infernal disturbances. The mention of the formidable Procet as Sir Conrad’s sire appeared to move Argus as well, and he mentioned to the others that the good will of such a Cainite of influence would also be highly desirable. Ultimately, unsure of the wisest course, he decided to take counsel with the spirit of the young Brujah himself.

As the wondering Concord looked on, Argus then performed a magical rite to temporarily drive the rabid infernal spirit into the darkness of Sir Conrad’s psyche. In temporary control of his body once more, the Brujah expressed no fear of the Final Death, but was horrified by the danger to his immortal soul. The neonate beseeched the sorcerer to help him. Argus then openly admitted that despite his mastery of Dur-an-Ki (an art of which the coterie was heretofore ignorant), he lacked the skill to exorcise the powerful demon but added that his teacher, who dwelt hundreds of miles to the west, surely could. Conrad eagerly agreed to the journey, and pledged his support to aid them in return, however he could and for as long as they wished.

His decision made, Argus called upon further rites to place the young Brujah in an unshakable torpid state. The trio then travelled briefly with the Concord, as their road would take them near Timișoara before they would need to head further west. The Brujah ashipu (for such are the practitioners of Dur-an-Ki called) displayed his sorcerous might one final time on the journey, summoning a ferocious storm to cause the approaching army of Prince Andrew of Hungary to take shelter while the Cainites and their entourage safely slipped through their lines. The display saved both coteries a costly detour, and perhaps a fight. The three demon-hunters and their charge took their leave of the coterie soon after.

The Concord would not lay eyes on Sir Conrad again for some years. When they met up once more in the city of Constantinople in AD 1203, he would relate his harrowing years with Argus, Maluziel and Sir Simon of Ragusa. Curiously, although Argus was a clan-mate and Sir Conrad was clearly in awe of his abilities, he was less than forthcoming regarding the older Brujah’s origins and activities.

What little is he has shared of his Greek cousin is that even before his Embrace in the first years of the 9th century, he was already a sorcerer and an obsessive student of the occult. His studies into secrets best left undisturbed had caused him to suffer more than one close shave with infernal powers, and it was after one such encounter that he found himself accursed. Sir Conrad has not said what this curse was, but it caused Argus do undertake a long journey of self-discovery which culminated in his Embrace in the rugged northern mountains of what is now the Kingdom of Portugal.

He claims descent from the late, legendary Carthaginian ashipu Yzebel, who was slain in battle with displaced Roman Ventrue as the Suevi, Vandals, and Visigoths over-ran the failing imperial provinces of Hispania in the 5th century. Her daughters, particularly Argus’ sire Adelina, keep Yzebel’s sorcerous traditions alive, and maintain an influential presence in the Cainite courts of their land.

Curiously, Conrad agreed to have his memory wiped of the Cainite who exorcised the demon and restored his faculties and yet, he speaks fondly and without difficulty of Adelina, thought to be the most accomplished extant ashipu in Iberia. Likewise, his memory of her sisters-in-blood Ayzebel, Efigénia and Leocádia is quite intact. This begs the question, exactly who is Argus’ teacher? Iulia has speculated that the tales of Yzebel’s destruction might be incorrect, or that perhaps another Ancient of the Carthaginian era has taken residence in the hinterlands of the Kingdom of Portugal.

Argus certainly seems to display intimate knowledge of the clan history. He also follows a rare Cainite philosophy known as the Road of Entelechy, an ancient, rare and highly demanding variant of the via humanitatis that emphasises pursuit of self-perfection and absolute actualisation of one’s destiny. In addition to his rituals of abeyance and protection, as well as his command of weather magic, Sir Conrad has witnessed Argus battle spirits with his own formidable psyche, move objects purely with the force of his own mind, and produce fire from thin air. Even a Tremere would think twice about assaulting the Brujah sorcerer. Whomever his teacher truly is, he must be potent indeed to impart such knowledge. Argus guards the secret of their existence jealously, and he would surely suffer the Final Death before he gave up either the location or identity of his master.

In addition to this mysterious mentor, Argus clearly looks up to the Salubri Maluziel as a teacher as well. He tends to bow to the old Warrior’s knowledge of the Baali, and readily takes his advice on most things. In return, Maluziel recognises that Argus possesses perspectives of the spirit world, especially aspects of Infernal spirits, that he cannot match.Their friendship is built upon several centuries of reliance upon each other and many shared dangers. Few alliances in the Cainite world are so strong, nor as genuine, as that displayed by the Brujah sorcerer and the Salubri Warrior. They keep each other motivated to continue their quest, for neither would suffer safety and ease knowing that the other would continue into danger. They are an excellent team, all the more formidable for the addition of the youthful verve and energy of Sir Simon of Ragusa.

Lineage: Childe of Adelina, Childe of Ysebel (d?); further lineage is unknown but Argus places himself in the 7th generation. 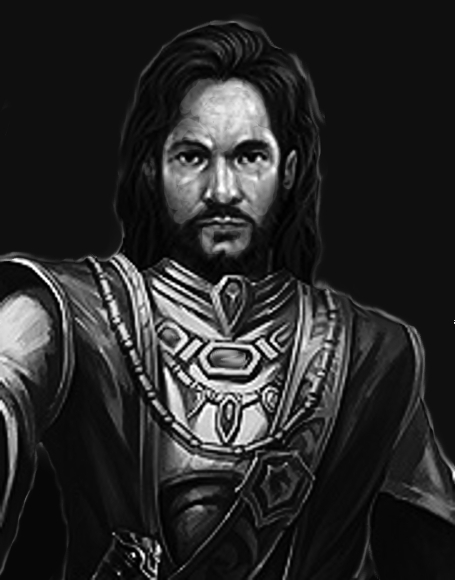