A self-appointed cultural ambassador of the French Courts of Love, this Toreador is touring the Eastern courts, hoping to pass on the tenets of chivalry and courtly love.

Innocent, sparkling blue eyes light up this noble lady’s face, accentuated by her pale skin and fragile form. Long, dark tresses and a demure demeanour complete the image. She appears to be both gentle and gracious in manner.

(Expanded from the character as presented in Transylvania by Night, pp. 95-97).

Arianne wanders the courts of the east, usually staying for a month or two at each settlement before moving on. She may be welcome at the courts of the Árpád Ventrue and the Tzimisce Voivodate for different reasons, but it is a rare privilege indeed to move unimpeded throughout the land and expect hospitality everywhere. Arianne’s reasons for leaving her beloved France are not generally known, though she speaks fondly of the courts of Prince Alexander of Paris, Isouda de Blaise of Chartres and of course, the travelling court of Matriarch Salianna, monarch of the Courts of Love. Her reasons for travel in the east appear to be nothing more than an extended tour to take in the sights and exotic culture of the east, while imparting the latest developments in the chivalric movement. She is especially enamoured of the notion of Courtly love, and has instructed Vencel Rikard, Gregor of Pressburg, and even Radu of Bistritz in its tenets.

The formative coterie encountered her in that last prince’s court in the city of Bistritz. She appeared to be quite impressed with Sir Gunthar, in spite of his rough attire and heavily accented command of the langue d’oïl, as it had been some years since she heard her own native tongue. The Gangrel attempted to play the games on her terms, but he quickly found himself to be out of his depth. Arianne regaled the court with anecdotes of the ‘civilised’ Cainite courts of the West, and proved to be a most willing participant in their involvement in the festivities in the city.

Many years later, elements of the Concord and the Ashen Band encountered Arianne in the Cainite court of Zagreb, which was temporarily hosting the Fifth Cainite Crusade. She was up to her old tricks once again, but to her credit she remembered the Concord and complimented them on their rather dramatic rise in influence in recent decades. For their part, they kept the Toreador diplomat at arms length, and they were relieved to find that she had no interest in remaining with the pilgrimage. Arianne remained behind at Zagreb when the army set off for Spalato. 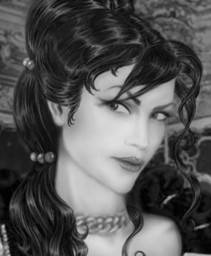