Once the Western Praetorian Prefect of the Antonians, during the Great Sack this Ventrue was revealed to be a member of the Chosen of Calomena. Staked, he was given to the Lexor Brujah for judgement.

A flabby, balding fellow, given to wearing ostentatious robes of office and a great deal of semi-precious jewellery. He usually seemed to be enjoying himself immensely, perhaps simply in anticipation of the death and destruction that he would one night visit upon the peers who routinely underestimated and denigrated him.

(expanded from Constantinople by Night, p. 116)

Basil arrived in the Queen of Cities in 1185, but his welcome from his brothers and sisters among the Antonians was cool. Certainly as the progeny of the late elder Theodora, who held the position of Western Praetorian Prefect for two centuries in addition to being the Prince of Thessalonica, he had a claim on the title. A childe of the formidable Septima Dominica, Theodora managed both of her duties with enviable proficiency but not even she was capable of galvanising her territories against the threat of the Normans. Theodora was destroyed when they swept through the west in 1185, sacking and burning her city. Basil was the sole survivor of the carnage, and produced himself as Theodora’s heir during the Eighth Council. Reeling from their defeat at the council, and as none others were willing, the Antonians grudgingly granted him the position. It was a thankless task, made more so by their genuine dislike of his sycophantic, vapid manner.

In truth, Basil indeed served as Seneschal of Thessalonica, and was indeed in Theodora’s inner circle, but for nearly two centuries prior to the destruction of his home and sire his existence was characterised by a never-ending quest for the next hedonistic exercise in pure debauchery. His brothers and sisters knew this, and seemed to consider him to be a lesser vintage of their august bloodline as a result. Even so, he was welcomed among Nicepherus’ faction, though he seemed to do little to actually further their plans.

Late in AD 1196, Basil was present at the Antonian Blood Feast in the fomative Concord’s honour. He exchanged courtesies with them but little else, although he did stay until the end of the festivities and appeared to enjoy the proceedings immensely.

During the Great Sack, the full extent of Basil’s treachery became known. It would appear that he had been working with the Chosen of Calomena for a considerable length of time, informing them of the locations and defences of Romaioi Cainite havens in preparation for the vengeance of Calomena that was to come. Once the crusaders were within the walls, the Chosen did their best to contribute to the chaos and death, believing that the destruction of the Queen of Cities would being on Gehenna and the final judgement of Caine’s dark sister. They lit many fires, most of them indiscriminate but a good number of them were intended to immolate Basil’s fellow Trinity and Scion Cainites. They would glory in the destruction, and stand at the right hand of Calomena.

Instead, they ran into the Concord. Despite his nearly 2 centuries among the undead, Basil was no warrior. When confronted by the seasoned coterie of neonates, then seeing the speed with which they battered his coterie, and after being struck by the Dread Gaze of Brother Adalbert, Basil’s courage failed him. He quickly surrendered rather than face destruction. He was staked, and along with Theophilus and Dorotheus, given over to Conrad of the Lexor family to face justice.

His eventual fate is unknown to the Concord. 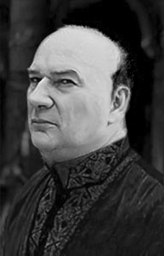