This vile, murderous Tzimisce led a pack of bestial Cainites in the wilds of the Tihuta Pass until they ran afoul of the coterie and he was brought to justice.

An impossibly beautiful young man of the Kievan Rus, Beltanz had shoulder-length, dirty blonde hair and cruel blue eyes. His features were almost perfectly symmetrical, belying his vanity and skill with the flesh-crafting arts of his clan. He wore fine clothes under his rough furs and hides, and typically armed himself with a spear.

Beltanz was the progeny of Noriz, the Corrupter of Legions, and was a man after his sire’s own heart (perhaps literally). Veceslav has revealed that Noriz and his line are enemies of he and Gabor; that Noriz had taken the heart’s blood of his grand-sire, the ancient Demenaus. Beltanz was at least a century under the Blood, and had spent much of that time in ceaseless competition with his multitudinous brothers and sisters in blood. His aura was stained black with the evidence of more than one incidence of diablerie, and he appeared to display absolutely no remorse for his crimes. In addition to his thirst for the heart’s blood, these offences included the slaughter of many of the men of the Pecheneg village of Letzav, marauding against the caravans that made use of the pass, and as the coterie later discovered, the torturous and fatal inclusion of many wayfarers into a flesh-crafted larder for his seven hell-hounds.

He also appeared to have more than one member of his pack bound to him by the Blood Oath, including the Brujah warrior Depanuz and the Tzimisce fledeling Jals. Two of his lackeys, Tepak (a bat-eared Gangrel Pecheneg) and Hors (a slimy, ebony skinned Nosferatu), appeared to be involved in some sort of fiendish blood bound love triangle with Beltanz as well. Hors’ and Tepak’s progeny, the toad-like Seragua (stolen and Embraced on her wedding night), and the wolfish Vladimir, were likewise bound to their sires. According to Jals, of the coterie of Feral Diabolists only his sire, the clever Steviru, an impossibly elongated Tzimisce covered in bony spikes and barbs, appeared to have a measure of free will. Quite loyal (or simply afraid) of his master, Steviru was just as cruel and cunning as Beltanz and far more creative in the execution of his tortures.

After the coterie defeated Beltanz and his marauders, they executed the torporous survivors except for Jals and Beltanz himself. Jals was taken in by the coterie in the hopes that he could be reformed. Beltanz was questioned by the coterie, and readily revealed that he had much wealth with which to buy his release. He also offered to join forces with them, claiming that in the mountains west of the pass lay a helpless methusulah of his clan, protected by only a single servant Koldun by the name of Maria Belladodia. While he had intended to take the ancient’s hearts blood for his own, he would be more than willing to cede his claim to one of the coterie.

Unimpressed by his offer, the coterie staked the villain and presented him to the villagers of Letzav as part of their claim of sovereignty over the valley. The Pechenegs duly set up a pyre around Beltanz and set fire to it, sending the Tzimisce to the Final Death.

Soon after, they also tracked down Beltanz’ secret retreat, destroyed his hell-hound guards and discovered their grisly larder. They also liberated the villain’s hoard of treasure, using it to defray the costs of their construction afforts.

Lineage: Childe of Noriz; descendant of an exotic eastern lineage largely unknown to the west. 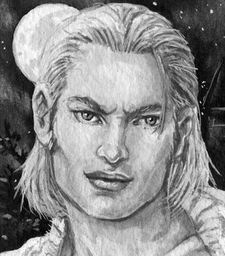