Once the bodyguard of Archdeacon Simon von Nijmegen, this puissant warrior left the Burzenland with the demise of his master. His whereabouts are unknown.

A tall, lantern-jawed, barrel-chested German warrior, clad in a grey surcoat bearing the device of a white shield with a crimson lion regardant, and his mail, sword, and dagger are of superb quality. The soldier is middle-aged, silver increasingly finding its way into his short blonde hair and goatee, and he has a tendency to limp a little on cold days.

This warrior was first encountered by the Ashen Band in the Summer of AD 1214, shortly after Ulrich von Wettin aka Heinrich the Hound was staked by the young hunter, Valentinus. Fortunately for him, the mortal was ignorant enough to believe that he had destroyed the vampire by staking him, and Valentinus darted from the scene to find his superiors. The Ventrue was safely removed before Archdeacon Simon and his entourage arrived to make sure that the job was finished, and they had all arrived ready for a fight. Brand hovered protectively at Simon’s side, ready to answer any threat to his master with his own sword. However, the ease and respect with which they conferred soon gave those spying upon the display the impression that the two men regarded each other as friends, if not quite equals.

In the months to come, investigations into the archdeacon, his entourage, and his congregation would bear considerable fruit as to the identity and purpose of Simon von Nijmegen. However, comparatively little was discovered concerning Brandt. Initial enquiries revealed that he arrived in Kronstadt late in the Autumn of AD 1202, that he briefly took employment with the city guard, and that he resigned his position to take up a role as Simon’s bodyguard by January of 1204. This somewhat innocuous association might indicate that the two men did not know each other previously, but further investigations revealed that this was not the case. Indeed, in the mid-1190s, a sergeant by the name of Brandt of Bremen served the Cardinal Melior as bodyguard when he visited the court of the French King, Phillip II, as papal legate. This would have been the same period through which Simon served the same cardinal as deacon of the Basilica of Saints John and Paul on the Caelian Hill. It is likely then, that they knew each other for far longer than most Kronstadters seemed to think.

Other than that, it was discovered by the Ashen Band and the Concord that Brandt belonged to an old ministerial family that long served the archbishops of Bremen. However, the family fell in status after they backed the Welfs in the dynastic struggles between Frederick Barbarossa and Henry the Lion. After the Welfs lost the struggle over Saxony, many of their prominent ministerial knights found themselves without potentates to serve, and were reduced to offering their services as sellswords. It is likely that this was the reason this very capable soldier was reduced to the status of bodyguard-for-hire, and why he chose to serve a master so far from his native lands.

Finally, it became quite clear that it was Brandt who had assumed the responsibility for the growth of Simon’s household bodyguard, and that he was likely tasked with the lion’s share of martial training for the wards of the Orphanage of St. Emeric too. As far as the vampires of Kronstadt were concerned, as a commander of men, and a trainer of hunters, Brandt was almost as dangerous as Archdeacon Simon himself.

Fortunately, any danger that Simon, Brandt, and their stable of apprentice hunters was forestalled by the untimely death of the archdeacon. Fatally hit in the neck by a Cuman arrow at the Battle of Castle Buzău, Simon reportedly perished in his tent the next day. None of the Ashen Band could get close enough to confirm the kill, but Marius assured them that unless his followers could command a miracle, the wound from the arrow that he put in the archdeacon’s neck was indeed fatal. Furthermore, the signs from Simon’s camp indicated that his men were in mourning. The breach of the Sixth Tradition that Ulrich had caused was now closed.

Grief-stricken but stoic and watchful, Brandt accompanied his late master back to Kronstadt and saw him buried in the churchyard. He and his remaining men remained at the orphanage and priory for 2 weeks before departing with several of the most senior orphans. It is unclear if the knight had opportunity to speak with the Bishop of the SIebenburgen or Simon’s replacement, but the new archdeacon, Tamás, proved to have a similar watchful nature as Brandt himself. 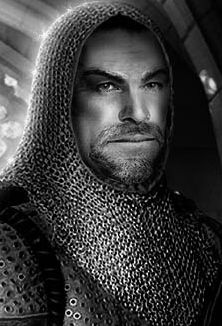