The late Basileus of the Antonian Ventrue. A profoundly powerful, and deeply flawed, elder. He perished at the hands of vampire hunters when the city was sacked in 1204.

An old man with curly white hair, a sharply defined, strong face and dark, solemn eyes that spoke volumes of bloody deeds and lost love. His tall frame was regal, emphasised by his rich purple robes and golden bracers studded with rubies, emeralds and amethysts. He wore a large golden signet ring.

Caius, who was a lieutenant of Constantine the Great, backed his leader’s bid to become Emperor of Rome. A man of intense faith and profoundly dark moods, Constantine turned to Caius in times of hatred and predatory rage. Assuming responsibility for his mentor’s murderous moods, Caius carried out the dark and bloody orders that paved the way for the would-be emperor’s rise. He even carried out the execution of Constantine’s first born, Crispus, when the boy became a perceived threat.

Constantine fascinated the Triumvirate, and, under Antonius, the Ventrue helped Caius carry out his gruesome orders. Once Constantine was secure in his power, Antonius took Caius as his own. Little did he realise that he had Embraced the instrument of his own eventual destruction.

Caius was at first quite content to learn at Antonius’ side, but soon after the death of Constantine he felt a longing for his old position of imperial confidant. Learning from Antonius, Caius saw Michael as the immortal epitome of Constantinople’s holy wisdom. And he was canny enough to realise that while the basileus ruled all of the Dream’s secular matters, the Patriarch ruled Antonius’ heart, and so he was the true emperor. Caius served the Gaul for centuries, all the while hoping to replace him at Michael’s side. He confided his love for Michael only to the Cappadocian Alexia Theusa, who understood his longings.

When the Basileus became obsessed with destroying the Dracon because of his Embrace of Symeon, he engineered the resurgent Iconoclast controversy, which brought the empire, and the Dream, to its knees. Antonius was determined to destroy the Dracon’s power even if it meant the end of everything the Triumverate had worked for over the centuries. In light of his fanaticism, his subordinates began to doubt his rulership. Caius, for his part, went along with his sire but saw his chance. His first ally was Septima Dominica, who had come to despise her sire for curtailing her idolatrous and hedonistic ways, and together they slowly brought a circle of conspirators into their fold.

Once it was clear that the Dream could not survive Antonius’ fanatacism, Caius and Septima Dominica approached Michael and the Dracon with a plan at the secret Fourth Council of AD 796. They would destroy Antonius himself, and put the house of the Byzantine Ventrue back in order. The Archangel and the Dracon agreed reluctantly, for the good of the Dream, and two nights later Caius staked Antonis the Gaul at a council meeting. He and his conspirators then left their ancient sire to the dawn.

Caius assumed the throne of the Antonian basileus, and hoped to take the Gaul’s place in Michael’s bed. He was disappointed. Consumed by guilt over his decision, Michael increasingly withdrew from Cainite society and eventually became a recluse. Any affection he may have felt for Caius was overcome by the horror of their mutual crime. Caius has never recovered from the rejection. For the first centuries of his rule, he benefitted from the advice of Septima Dominica, who stood at his side as the caesar magister. A truer master of intrigue than even their late sire, she stabilised his rule and provided the guidance necessary for Caius, ever the beta, to be an effective leader. For a time, the Dream functioned properly and the empire expanded.

Her assassination by witch-hunters in AD 1001 left him, and therefore all of the Antonians, rudderless. In the years after, Caius carried out his duties and maintained his authority by playing rivals off against each other with the low cunning that once earned him the confidence of an emperor, all the while not-so-secretly yearning for the love of the Archangel. Even the likes of Belisarius, Ducas and then Anna had only been able to threaten his power for a short time before Caius shifted the balance to his own favour with the backing of their rivals. Ever at his side stood the formidable Alexia, who more than made up for any deficiencies of education or intelligence from which he may have suffered.

Even so, the Latin Riots of AD 1182 took Caius and his court completely by surprise. His distraction resulted in the humiliation of having to provide a formal apology to the Latins and granting them extensive rights in the Eighth Council of AD 1185. He failed to regain any momentum in the years since, and some wondered if perhaps the Narsene Lasombra might succeed where Caius’ rivals among his own Family had failed for centuries.

The coterie met Caius very briefly at the Antonian Blood Feast in their honour. He sat on his golden throne (flanked by his two ghouls who are thought to be more than 400 years old) for the early part of the evening, listening to the whispered comments of Lady Alexia but otherwise appearing completely disinterested in the proceedings. He took his leave not long before Belisarius and was not seen again for the rest of their time in the city.

As the city spiralled into tension and disorder following the arrival of the Fourth Crusade, Caius consistently proved himself to be guilty (by virtue of negligence) of allowing the crisis to deteriorate. The one beneficial act that he managed was in forcing unilateral support among the the Antonians for young Emperor Alexius IV’s Imperial Processional in the late months of AD 1203. Even in this situation, the basileus acted only because he was manipulated into it by the Concord and their allies among the other Trinity families. With the Processional a qualified success, and potential rivalries to his own position quelled, Caius quickly subsided once more into his typical neglect.

In April of 1204, with the crusade inside the walls, Caius hesitated to act decisively in his duties. Paralysed by his own self-pity, he remained on his golden throne in the Great Palace for several nights. According to one of his ghouls, whom the Concord would later assist, the basileus was finally stirred to activity when his caesar magister Nicepherus brought word that the Patriarch’s resting place was in danger of discovery. Caius grabbed his sword and moved to leave the palace, saying “I’ll deal with him!” In turn, his Cainite subordinates and mortal retainers tried to reason him into staying. At this point, it would seem that centuries of denial and hatred erupted, for Caius appears to have exploded into a frenzy, butchering and rending those of his court that did not flee.

The Concord had the dubious distinction of witnessing the end of the basileus less than an hour later. Intercepted by the zealot Sir Gauthier de Dampiere and his allies in True Faith, Caius was cornered, immobilised by boar spears and hacked to pieces. Unbowed and stubbornly defiant despite his predicament, Caius bit the hand of Gauthier as the crusading knight stepped in to deliver the coup-de-grace , severing several of the mortal’s fingers. Undeterred despite his agony, Sir Gauthier dealt the Final Death to the ancient Cainite moments later.

It is likely that few would mourn Caius in the years, decades and centuries to come. Despite his obvious power and great skill, he was an exemplar of everything that was wrong with the Families of Constantinople and their Dream. Full of talent but short of inspiration or virtue, the late basileus sought to possess the Dream, not serve it. Although his folly was contributory rather than total, his venality cost the mortals and Cainites of Byzantium very dearly indeed…

Lineage: Childe of Antonius the Gaul (d), Childe of Ventrue. Caius was of the 5th generation. 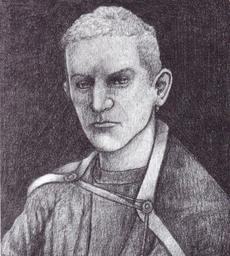