An arrogant, powerful Warlock who serves his sire, master and namesake, Abetorius, as his chief lieutenant and envoy in Constantinople and abroad. He has not returned to the city in some years, and rumour has it that he has gone to the Final Death.

A soft-featured, pale man in the prime of his years, with mousy brown hair fashionably cut and an arrogant glint in his dark brown eyes. He wears expensive robes of red silk, embroidered with glyphs and symbols that appear to be arcane in nature. His ink-stained hands are delicate and dextrous; they constantly fiddle with the strange medallions, amulets and pouches that adorn his neck, breast and belt. He is armed with a dagger.

Calleo Abetorius Minor, or simply Calleo to those he knows informally, is the childe and lieutenant to Abetorius, the self-proclaimed Tremere Regent of Constantinople. Before his disappearance, he habitually affected a respectful, sometimes even servile demeanour with regards to the great magus, but otherwise dealt with the Cainites of both the Byzantine and the Latin persuasion in a cool, professional, and nakedly self-serving manner. It was obviously clear to Calleo (and indeed just about anyone with eyes to see and a mind to comprehend) that the Warlocks had far more to offer than they needed, and he seemed to be out to get what he could.

He concentrated his efforts on the Latin Quarter, and the court of the then Bishop Alfonzo in particular. There he ran into trouble with the normally unflappable L’Orso, who seemed to feel threatened by the wider gamut of services that Calleo and his brethren could offer. Like his fellow “apprentice”, Vasileous, his dealings focussed on how his magical skills could offer security, and what he wanted for it- the location of one Theresa Kymena, as well as any “demon-worshipping” Salubri that strangers might know of.

The coterie first encountered Calleo with Abetorius Maior at the Saut Aswad, during the investigation into the murder of the Narsene Lasombra Juliano and Adrianna. He noted their interest with a knowing, arrogant tilt to his features, but he did not approach them. They saw little of him in the years since, nor did they have cause to seek him out. Indeed, other than the odd overture to this Latin faction or Greek family, he became a rare sight in Constantinople.

Word had it that Calleo’s sire had charged him with seeking out a magical talisman of great power, necessitating frequent trips throughout the provinces and nearby realms of both long and short duration. Others said that he was hunting Salubri, and further rumour had it that he was attempting to set up secret chantries throughout Greece, Bulgaria and Serbia. Whatever the case, in April of 1204 Abetorius Minor was present at his sire’s side when the walls of Constantinople were breached. No fire touched the Exokionion chantry, and Iulia of Weissenburg was heard to comment that she saw mortal crusaders dazedly pass the fortified villa by to seek other targets for their rapine, burning and looting.

In 1205, Calleo left the Queen of Cities once more, joining a caravan headed by Andreas Aegyptus, a noted Settite merchant who specialised in transporting Cainites. On this occasion, it is said that the ambitious caravaneer took no fewer than a dozen vampires with him on his journey to the West. Calleo’s ultimate destination is unknown, thoughit is common knowledge he took his leave of Andreas and the others at Aquilea. His eventual fate is also a mystery, for Calleo Abetorius Minor has not returned to Constantinople in all the years since. However, given the length of the interval, he is widely considered to have found the Final Death somewhere out there on the road.

Embrace: Mid 12th century. As the progeny of Abetorius Maior and brought across relatively recently, Calleo would most likely be a formidable 6th generation. 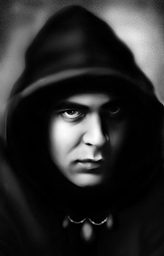