This sly courtier of the House of Fabricius is known among mortals as the Lord of Parcey in the Free County of Burgundy and also of Christopolis in the Kingdom of Thessalonica.

A pale nobleman aging quite gracefully into his middle years, sporting fine black hair, a delicate goatee and compelling, intelligent blue eyes. He wears green velvets, and appears fond of copious amounts of gold trim to complement his many jewelled rings. A sword and dagger, both of exquisite craftsmanship, are worn at his belt. His device is that of a white sunburst crowned on a field of crimson, cantoned with a green laurel wreath on a field of white. 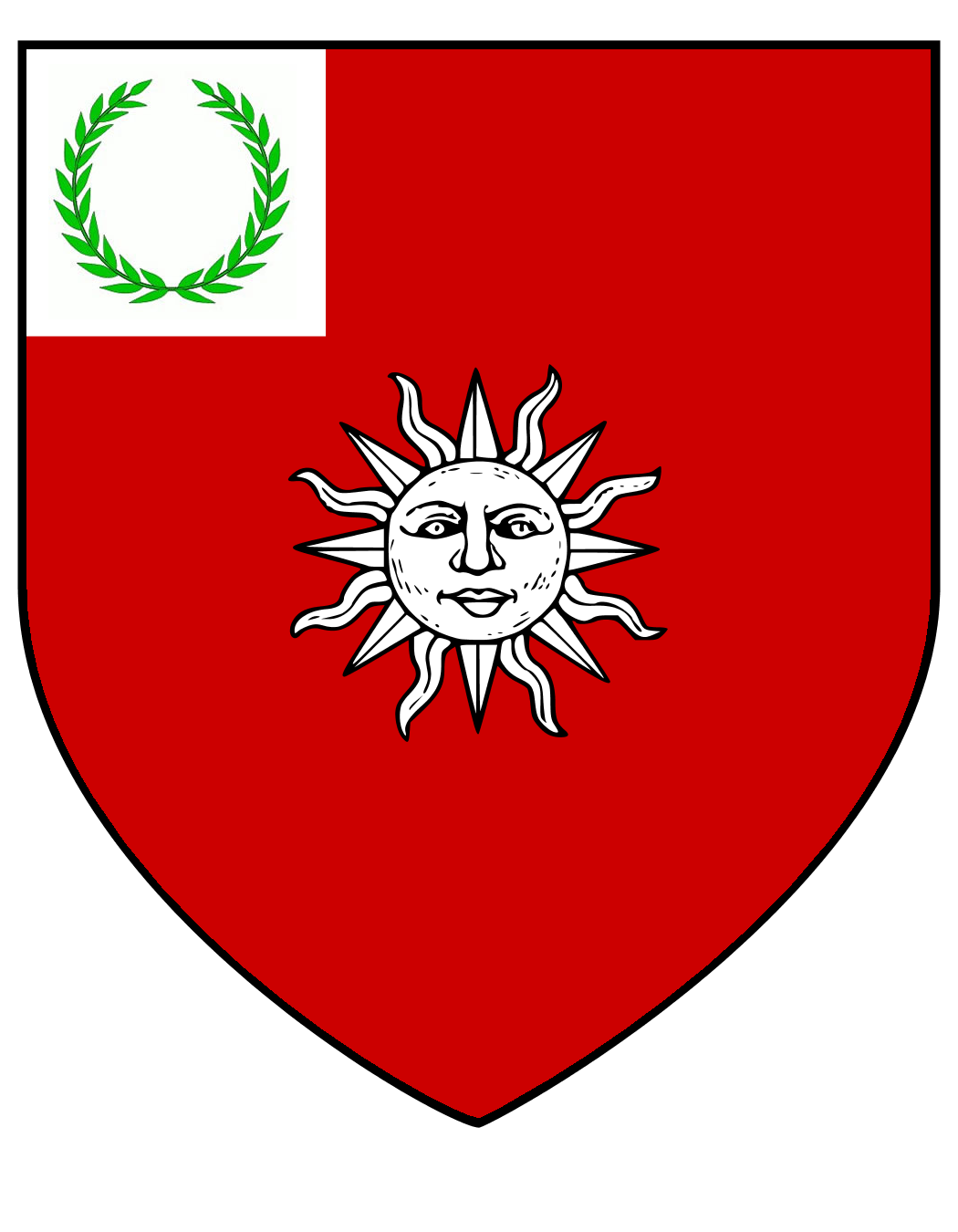 The coat-of-arms of Colard II, Seigneur de Parcey et Christopolis. Colard is the actual lord of his lands, and a prominent vassal of both the Countess Palatine of Burgundy and the King of Thessalonica. He successfully transitioned his feudal power in the mortal world by arranging a look-alike to grow old in his place while he stayed behind the scenes for many years, controlling the inheritance through his catspaw, whose son now oversees his French properties while the mortal watches over the Greek ones. Of course, his mortal title does not translate to Cainite society so when dealing with the undead he frequently goes by his simple Christian name instead.

When the Concord first met him, Colard of Parcey was immediately quite unlike any of his fellows among the crusaders of the House of Fabricius. He had no pretensions towards being an exceptional knight or even a skilled warrior, nor did he display any real desire to take more than his modest fill of plunder or blood during the conflicts that marked the progression of the Fourth Crusade from Zara through to the Queen of Cities. Glory did not appear to interest him at all, and despite his obvious intelligence and smooth manner he avoided seeking prominence in the games of prestation and status. Indeed, if there was one thing that Colard excelled at it was in avoiding obviousness, and if there was one thing he admired it was subtlety. He strove to be unobtrusive and relatively unassuming in the nightly conduct of his duties. He also appreciated seeing the same trait in others, and he watched those who worked similarly to himself quite closely so that he might hone his own talents to perfection.

Before the pilgrimage, he successfully served his sire as Seneschal of Dole, and while he made a pledge of loyalty to Felix of Vaucluse, he enjoyed enough status that he could, if necessary, disengage himself from his arrogant kinsman without (too much) blemish on his own honour. Also unlike his impulsive and greedy lord, he was welcome in nearly all quarters of the Fourth Cainite Crusade, if only because they desired to keep an eye on this slippery fellow’s doings.

Since the gathering at Venice he glided through the councils of the Fourth Cainite Crusade, working the will of his fellows while leaving nary a ripple in his wake. This particular Burgundian Ventrue appeared content enough with the leadership of Sir Felix, or at least no one ever observed him display anything other than bland acceptance of his late, erstwhile leader’s directives. So able was Colard of Parcey in his role as unassuming proxy that one could even be forgiven for believing that he was absent the typical Ventrue traits of overweening pride and zealous ambition.

And that is precisely why he has proven to be so dangerous, for Colard of Parcey walks the via Consuasor, and he has elevated the role of aide-de-camp to an art form. He is in the habit of giving cunning advice and engaging in subtle politicking and he has a certain willingness to deal with the details that Sir Felix and the other members of his former coterie found boring or distasteful. This made him indispensable to them, as it did to his sire, Prince Raymonde of Dole, before them. Rumour among the circles of the Fourth Cainite Crusade had it that Colard was sent on the pilgrimage by the elders of the House of Fabricius purely as a measure of moderation and damage control for the excessive habits of Felix and Sir Wendel. For his own part, he played the games of conciliation and intrigue with exceptional skill; mending fences, rebuilding bridges, and smoothing feathers wherever Felix’ Frankish directness or cruelty caused damage.

In this he was quite successful until February of 1204, parleying the reputation of his sire and his own political talents to mastermind the rise of the House of Fabricius, and Felix in particular among the powers of the Fourth Cainite Crusade. At a time when his lord was quickly replacing Guy de Provence in the eyes of many as a more credible leader, Colard was making the rounds of the factions, making quiet assurances of the benefits of supporting his coterie. Indeed, it was precisely one of these meetings that kept him from the disastrous assault on the “Turkish” treasure ship. In the wake of the disgraceful defeat of the House of Fabricius, he worked to reduce the damage to the reputation and dignitas of their faction, which led him to spending more and more time away from his fellows as he sought to curry favour with the likes of Hugh de Clairvaux, Lanzo von Sachsen, Thibaud of Bayeux, and Jan van Tassel.

In his investigations of Felix’ coterie, Lotario Acuto managed to uncover the feeding restriction of Colard of Parcey. The Ventrue may feed only on fallen nuns (those who have betrayed their vows in some manner, and no longer see themselves as “pure”). He often seeks to engineer their downfall, and for this purpose he tries to cross the paths of nuns as often as he can. Apparently Colard seems to enjoy being the agent of their temptation.

He was notably absent when the Concord ambushed the House of Fabricius during their torture of Conrad de Monreal outside the Church of Eirene on the 13th of April. Earlier in the evening, they had encountered Sir Felix and a small army of minions sacking that same temple complex. Among them were Colard and the Tremere Florian, who had survived an earlier encounter with the Concord at the Monastery of St. John Studius. However, they and the majority of the House of Fabricius’ mortal minions had departed the scene, apparently to transport a significant amount of loot elsewhere. As such, Colard survived the downfall of his coterie, all of whom (save Tancred, who was taken prisoner and later turned cloak) met their ends at the hands and fangs of the Concord.

In the wake of the Great Sack, Colard and Florian formed a partnership and would go on to be a noteworthy element of the new Cainite regime that took shape both within Constantinople and also the Latin Empire. In addition to staking out a domain around the Forum of Arcadius and gaining the patronage of the formidable Tremere Regent Abetorius, they assisted Thibaud of Bayeux in his successful attack on the Cainite powers of Thessalonica. Colard’s prominent role among the mortal nobles in planning the capture of that city caught the eye of King Boniface, who awarded the nobleman with the lordship of Christopolis, a small port city some 100 km from his new capital. Never short on energy or ambition, Colard of Parcey continues to split his time between that settlement and the Queen of Cities, and he uses his mortal catspaws also to maintain his small domain in Burgundy. His reawoken and much indebted coterie-mate, Sir Wendel, watches over his Constantinopolitan holdings.

Lineage: Childe of Prince Raymonde of Dole, childe of Prince Claudia Arpineia of Dolla (d), childe of Gaius Fabricius, childe of Tinia (d?), childe of Ventrue. Collard of Parcey’s line is a prestigious offshoot of the blood of Gaius Fabricius, much favoured by their august progenitor. Prince Claudia, who was Embraced in the rule of Septimius Severus, ruled the Roman city of Dolla from AD 341, overseeing its gradual transition to the trading centre of Dole. Her destruction at the hands of a Brujah insurgent in AD 974 is still a point of honour for the bloodline to avenge. Her childe, Raymonde, was brought across in AD 866. He inherited the city with her Final Death, and rules to this night as a model of Ventrue honour, piety and dignitas. 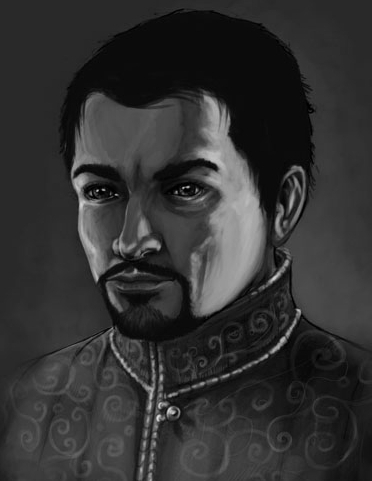