The late Tremere envoy to the court of Prince Vencel Rikard.

A soft-featured aristocrat dressed in the raiment of an Italian courtier. He favours red and black in his attire. His expression is neutral, with only his expressive, kindly blue eyes giving anything away.

Little is known of the late Contionari, other than that he was present in the Cainite Court of Buda-Pest as some kind of official representative of the Usurpers. None of the coterie entered into discussion with him because of the likely animosity this would have caused with Gabor the Bulgar and Veceslav Basarab.

In the midst of their journey between Mediasch and Klausenburg, the coterie came upon the end of a terrible battle between the familiar Contionari and an unknown Tzimisce koldun (later identified as the ancilla Antoniu). Before the coterie could interfere, the two sorcerers destroyed each other in a shared conflagration of fire and molten rock. An attempt to rescue Antoniu’s companion from Contionari’s servitor Gargoyles failed, and resulted in a short-lived and futile attack by the creatures on the coterie. Only one Gargoyle managed to escape, and headed south into the midnight sky.

Certain Mortis rituals conducted later on the brains of deceased mortal combatants revealed the identity of the koldun and the fact that a perilous magical land journey by Contionari and his men had been intercepted by Antoniu, a servant of Voivode Vladimir Rustovich. It is clear that Contionari was a powerful wizard of some sort, given the speed with which his caravan moved. It is unknown, however, why the Tremere ambassador risked his existence attempting to return to Ceoris in person. It is clear from the Concord’s tracking efforts, however, that he was intercepted by a Brujah ambush, necessitating a detour that led to successive Tzimisce attacks. When he met the Final Death, Contionari was very far indeed from his intended path.

In any case, whatever evidence he may have had on his person or his armoured wagon was immolated in the battle, so the mystery of Contionari’s demise may never be resolved… 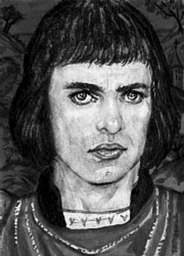