The deceased mortal boyar of Toth, Dévald was a hard man and a natural leader. He was deeply loyal to his people and his family, and forcibly became accustomed to making difficult decisions to protect both. Dévald passed away early in the winter of 1207.

A short, muscular, barrel-chested man with a stern chin, a slight paunch and grey hair. He carries himself with authority and dignity, and despite his encroaching years his manner is both lively and animated. He wears fine quality clothes of heavy wool, dyed the red and black of his family crest, and he is armed with a dagger and a broadsword.

Dévald was his father’s son. Not the monster that came to squat like a spider in the tower of the family compound, but the brave and intelligent man that brought unprecedented prosperity and security to his people. He may have lacked Bodor’s brilliant intellect and imagination, but he more than made up for it with resolve and cunning. Indeed, his shrewdness was matched only by his loyalty to to his family and the people of Toth. Although he was comparatively softer than other boyars, he was nonetheless capable of doing what must be done with little hesitation and no regrets.

Dévald ruled the valley without interference from Bodor for more than thirty years. He and Angyalka fell into the habit of meeting informally each week to discuss the needs of the people and how they could best be balanced with the administration of the valley in the name of the king. Toth continued to prosper during these years, and despite the uncertainties of “the curse”, so did their family. Dévald was fond of the tales of the Greek heroes that his father used to read to him in his youth, and he continued to share this joy with Angyalka’s children and grand-children. He knew that they humoured him, but he slyly suggested they have more children of their own so they wouldn’t need to listen to his prattling.

The relatively idyllic life of the family all changed in AD 1202, when his brother Farkas was butchered by crusaders at Zara. Suddenly, Bodor emerged from his seclusion and began taking a hand in the rulership of Toth, and Dévald found his power usurped in all but name. Before long his sister Erzebet took their best warriors to the west to exact revenge on the city and the 4th Crusade.

Her mission failed. When the Concord arrived in Toth with Erzebet as their prisoner, Dévald proved to be a gracious host but intractable regarding the vendetta against Zara. Little did they realise, the boyar had no interest at all in some distant city or any holy crusade. All he wanted was for Bodor to return to the tower and leave the valley in peace. His bluster and cold-hearted words were not for them at all, but to convince his own father of his ability to rule.

Before the matter could be resolved, the envoy of Voivode Koban arrived and took the matter out of their hands. The Concord proved their good intentions by rescuing Dévald from the feral Dominik, and then earned his friendship by risking their own necks to protect Toth from Koban’s Trial by War. The irony of the similarity between Zara’s and Toth’s situations, both attacked by overwhelming force on thin pretexts, was glaringly obvious in the events to come.

Dévald more than proved his worth during the struggle, inspiring his people (with a little arcane aid from Maude) with rousing speeches and defending the castle gate-house with great courage. Even Bodor’s cold heart was stirred, and he willingly ceased his interference, and appeared to be quite proud of his successor. The Concord also gained an ally in the boyar, although Toth would take many years to recover from Koban’s assault.

In the month before the passes cleared and they were able to depart, several of the coterie had the opportunity to know Dévald. He skilfully incorporated the Cuman prisoners into a workforce to set up shelters and repair the gates, displaying fairness but no pity towards the invaders. He and Angyalka worked hard to put the people at ease regarding the vámpírok in their midst, and gave much of his own energy grieving with the individual families, most of whom had lost fathers and sons. Dévald also grieved with the Concord, who had lost one of their own: the Gangrel Bernhard Billung had been lost pursuing the enemy after the voivode’s failed assault, and the ghoul Laszlo Szantovitch Gutkeled was slain defending the walls of Toth Castle. When the Concord moved on from the valley of Toth, it was with a great deal of the gratitude of its boyar, for they had also agreed to settle another matter for him.

Dévald’s one great regret in life was that he had no children of his own. He was married, briefly,in his youth but his bride perished of pneumonia in her very first winter in the harsh valley. Dévald approached his elder years without an heir, and his concern for Toth and his family made him begin to crave an heir. After all, if the Toth’s died out the Hungarian king might send a new ruler who did not understand the unique… challenges to ruling the area.

While he had considered formally adopting one of Angyalka’s children in the past, it had never been a particularly desirable option and was now no longer practicable. He has always worried that Bodor would not accept a commoner as his heir, and that it would bring unnecessary attention to the “family curse”. In any case, the only one of them with the inclination and talent to lead, Pál, fell at Dévald’s side defending the gatehouse in the recent Trial by War.

It had always been his distant hope that he would encounter some Transylvanian noble who would be eager to marry off a younger daughter and forget about her, as it would not do for doting relatives to uncover the “family curse”. Veceslav Basarab had mentioned to Dévald that he may know a suitable young lady near Belgrade, one Mirjana Zemunić (whom he knew to actually be Lyudmil, a revenant of the House of Krevcheski. While he was a little tentative to accept a bride from mixed Slovene and Serbian noble lines, the boyar realised that he was in no position to be picky, and he eagerly awaited word from his prospective bride.

Not 6 months after the Concord’s departure in January of 1203, Mirjana Krevcheski Zemunić arrived at the Toth Pass. Far more beautiful than Dévald had expected, he was well pleased to discover that she was also eager for marriage, even to a man more than 30 years her senior. Even better, the small circle of kin she brought with her were skilled engineers; their savvy in the use of intricate, state-of-the-art weapons-crafting bordered on the heretical, but both Dévald and Bodor recognised that it would come in very handy in the likely event of Koban’s return.

Curiously, his new wife proved to be strangely lacking in social graces, however, and other than performing her wifely duties in the bed chamber Mirjana preferred her own company to that of her husband. The arrogance of she and her family towards the villagers was also troubling, a matter that neither Dévald nor Angyalka were able to remedy, and as Bodor found their insights into the esoteric sciences pleasing, there was little they could do about it in any case.

Mirjana was with child almost immediately, and she gave birth to a son, Farkas, in August of 1204, followed by a second child, Mihne, in March of 1206. Unfortunately, Dévald would not live to see his children grow. Early in the difficult winter of 1207, he caught a chill supervising repairs to the gatehouse. The chill developed into a cough, which quickly went to his chest. Within the month, he lay on his death bed. Once more, Bodor offered the Embrace to his son, only to be refused a last time.

Dévald Toth succumbed to pneumonia at the age of 62, with Angyalka’s heartfelt and Mirjana’s almost believable weeping sounding in his ears.. He was surrounded by the remnants of the mortal Pecely and the Toth families. Bodor looked on, barely registering a reaction other than scientific curiosity as his son and heir’s death rattle echoed around the chamber. 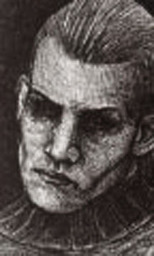