The cruel and brutal Prince of Hartberg and Lord of Karlach. He is a rival of Jürgen von Verden, and a participant of the Fifth Crusade in the service of Leopold of Austria.

A muscle-bound, towering Styrian knight. He is a scarred, pale, middle-aged warrior, wearing his greying brown hair at shoulder length, and sporting plenty of salt-and-pepper in his beard, but there is no stiffness or weakness to the man at all. His bright blue eyes are very direct, and he has a tendency to stare in a most unnerving manner. The knight is armed with a dangerous looking battle-axe and a matching dagger, and he wears for his badge a red axe on a white and green field. 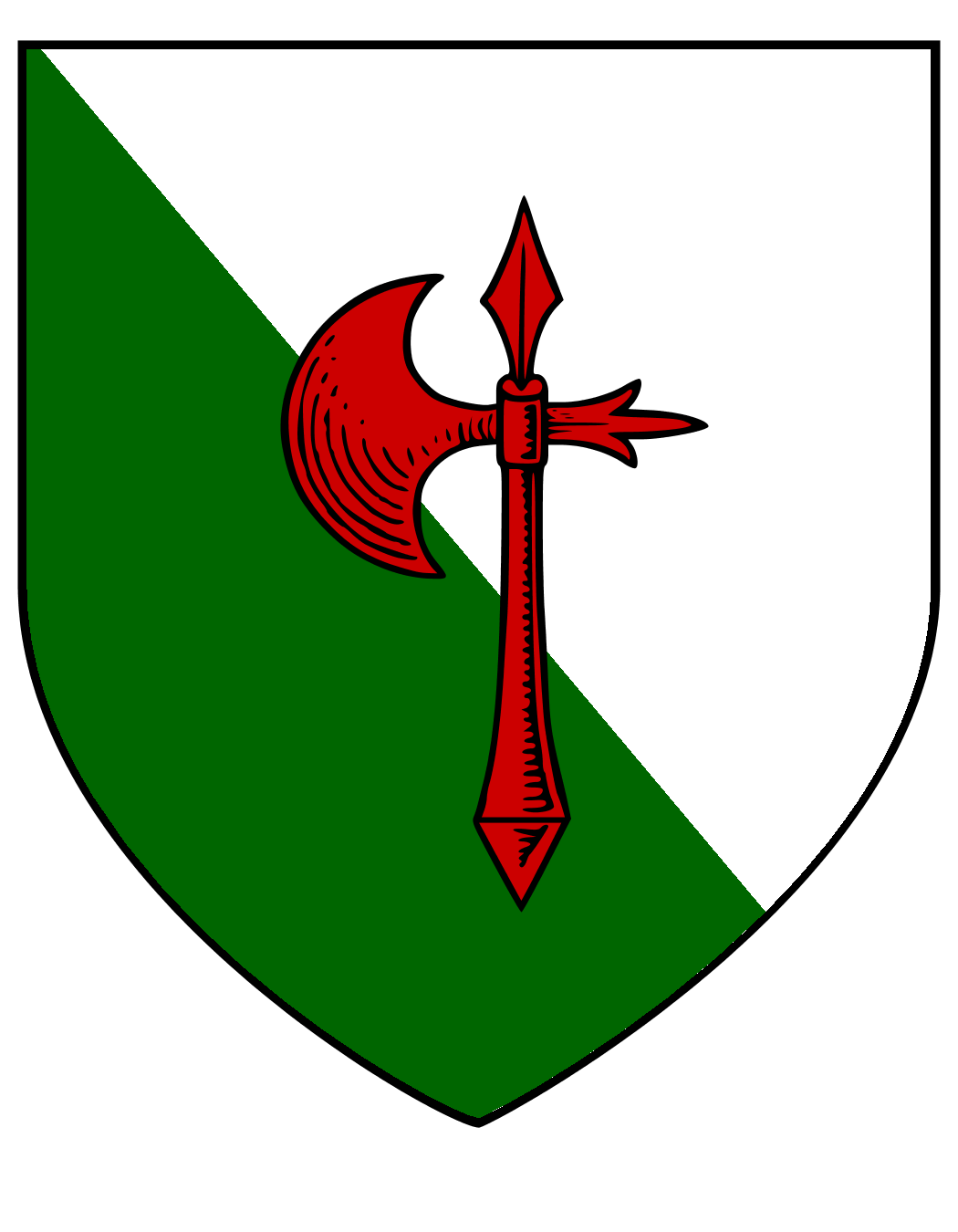 (modified from Under the Black Cross, p. 97)

A notorious member of the Ventrue clan, Dieter was a prominent leader of the 5th Cainite Crusade, where he served for a time as one of the elected primogen council. In mortal circles, he loosely masquerades as his own descendant, Count Dieter V, and is a prominent vassal of the Duke of Austria and Styria, Leopold VI. Among the undead, he is known as Lord (or Graf, as he styles himself) of Karlach, which encompasses his own princedom of Hartberg and those of his vassals, the princes of Güssing, Fürstenfeld, Feistritz, and Stubenberg. The territory of he and his minions encomasses some 130 square miles in central and eastern Styria hard by the borders of the Kingdom of Hungary.

Dieter sprang from obscure origins. As a mortal warrior of renown, he claimed that his father was a huntsman in Franconia, although no truth could be established regarding the tale — not that anyone would care after all these centuries. On the battlefield, fighting for the Ottonian armies, he distinguished himself for his boundless ferocity in battle. In the personal guard of Holy Roman Emperor Otto I at Lechfield in AD 955, he stood against a dozen Magyar horsemen as they tried to capture the imperial standard. In the end, he stood drenched in blood, surrounded by a dozen Magyar corpses. His bravery earned him ennoblement, and Otto himself awarded Dieter the county of Karlach, in the realm of Styria.

It was in these battles and early in his reign that the Ventrue took notice of Dieter. Upon taking his throne, he hanged every 10th male in his fief to establish his authority. In his first 10 years, he raided against the Magyars continually, ignoring Otto’s peace treaty with Grand Prince Taksony. One evening, a knight called upon Dieter’s tower, claiming to be a Saxon noble. The stranger, Wulfram von Esseling, claimed to represent an order of the Holy Roman Empire’s true rulers, those who built order with the sword and preserved it. He offered Dieter a place in the order but declared that he must earn it first.

Before Dieter could question or answer, Wulfram drew his sword and attacked. The battle was furious, and it lasted for what seemed an eternity, but the mortal eventually grew tired, his guard slipped, and Wulfram’s sword plunged through his breast. As blood bubbled on his lips and his life drained away, Dieter heard Wulfram say, “You have passed the test, for none have withstood me so. Welcome, child and vassal.”

Dieter abandoned his fief to his son in AD 999, when his ageless physique became the subject of gossip that was reaching Church ears. He became a wandering knight, serving in armies where needed: in the east against the Slavs and Magyars, in the south against the Italians and the Arabs who raided them, and in the west against the Wends, the Danes, and the Swedes. On the blade of his axe, he built a reputation for ferocity among the Ventrue, but the glee he showed in indiscriminate slaughter, pillage, and brutality troubled his elders, for many of his actions went against the “new” clan ideal. In the centuries after the dissolution of the Roman empire, such methods were common, but the stability of the Long Night had instilled within the clan a desire to appear as noble and lawful lords, not as the bloody and predatory warlords they had once been.

Indeed, it would seem they favoured Hardestadt’s progeny, Jürgen, who was equally capable of both brutality and nobility, as the paragon of the new Ventrue ideal. It did not matter that in the 12th century Dieter’s atavistic methodology was quite successful, allowing him to return to his castle and quickly establish a domain in central and eastern Styria. Before long, even Wulfram grew to despise and resent his childe, a particularly grievous blow to the bloodthirsty warrior because the elder had actually embraced Dieter for the very traits that he had now come to spurn.

Naturally, Dieter quickly grew to hate Jürgen von Verden as a result, and the Styrian developed something of a one-sided rivalry with the northern lord. Although they have never fallen into direct competition he slanders his rival from afar, and seeks to stymie the efforts of Jürgen’s vassals and agents. Although he already had cause to involve himself in the Fifth Crusade as a vassal of Duke Leopold VI of Austria and Styria, when it became clear that the Sword-bearer also had an interest in the 5th Crusade, Count Dieter was quick to involve himself so that he could work to foil any of his rival’s plans.

He instantly disliked Heinrich von Achern with an ardour that was quickly matched, and the acrimony between the Ventrue lords was almost equal to that which both of them also carried for Lady Kara Lupescu. Their insults and barbs gathered intensity from Zagreb to Spalato, and by the time the crusade was camped outside Acre they had resorted to open threats. An early enthusiast of Ulrich von Wettin’s sparring tent, he showed himself to be uncommonly strong and brutally effective, easily beating Brother Berengar, whose greater skill led him to underestimate the count’s abilities. Dieter also plotted incessantly to disrupt the Cainite Crusade’s primogen council, the idea pf which was originally floated by Baron Heinrich in emulation of his master’s methods. His goal was to render it irrelevant in order to assume total command himself but in this, it was he who underestimated the political acumen of the other councillors. Although he did form a sizeable coterie around himself, all Dieter really succeeded in doing was causing the other primogen members to hire or connive other Cainites to back their own strength, thus doing nothing other than factionalising the council.

During the tourney held by Prince Etienne of Acre, it surprised no one that Count Dieter would challenge Baron Heinrich to single combat. The Marshal of the Order of the Black Cross had learned from the defeat of his progeny, however, and he chose not to fight fair. Before joining combat, Heinrich produced a flask of vitae which presumably held the vitae of Lord Jürgen. He then made a quick speech praising his lord sire and wishing the assembled crusading Cainites fortune in the battles to come, he then took a long draught from the flask, handed it to his progeny for safe-keeping, then took up his sword and shield.

Perhaps battened on the vitae he had just drunk, and taking advantage of his mastery of Fortitude and slightly fresher form from the hard regimen of training he had endured since Zagreb, Baron Heinrich chose to fight defensively. He managed to land a few hits of his own, and managed to shrug off or turn the blows of the much stronger Count of Karlach for just long enough to goad and humiliate his short-tempered opponent. Unable to secure his expected easy victory, Dieter slipped into the liminal stages of frenzy, and charged Heinrich with a bestial snarl. Abruptly, the baron displayed a previously unrevealed proficiency with Celerity, side-stepping Dieter and then deftly stabbing him in the buttocks. The attack drew blood, and gave Heinrich the victory.

The humiliation of the wound drove Dieter into frenzy, further staining his reputation, and the assembled Cainite warriors were forced to pile on top of him to restrain him long enough for his reason to return. He stalked away from the tourney with his men, not to return.

When the curtain of True Faith that protected Acre fell several hours later, he had recovered sufficiently to take part in the mad scramble for territory. The Ashen Band observed him driving his men to the eastern end of the harbour, intending to stake out his domain among the French, Greek, Syrian, and Armenian businesses there.

Lineage: Count Dieter is of the 7th generation, and although he is now despised by his sire, his lineage is well known. He is the childe of Wulfram von Esseling, who reigns as prince of the old market city of Esslingen on the border of Swabia and Franconia. In his youth, Wulfram was a bloodthirsty warlord who manipulated the Thuringii to advance his agenda against the Franks in the 5th and 6th centuries. He is the childe of Vangilius (d?), a prominent puppet-master who secretly controlled the Hermundurian tribe during their wars with the Romans in the 2nd century. Vangilius has not been seen since the middle of the 4th century, and is thought to have been destroyed by a Gothic Gangrel pack who hunted him for his blood. He was the childe of Erik Eigermann (d?), who warred for centuries with his rival, the Gaul who would be known as Antonius the Gaul. before the arrival of Rome in the north. He would later become Lord of the Eastern Marches of Germany throughout the Long Night, though he has not been seen in some time, and is believed to have entered torpor or gone to the Final Death. Erik Eigermann was the childe of Ventrue. 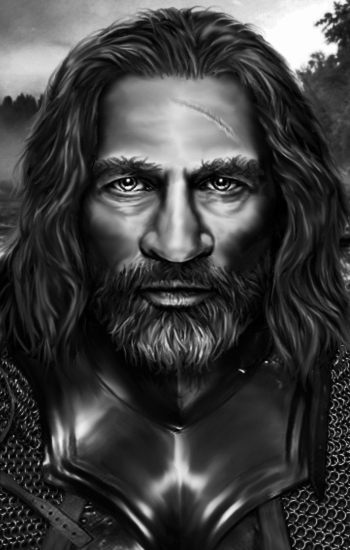