The village priest of Etteldorf. Father Dolph is a merry fellow, but nervous in the company of strangers.

A stout, ruddy skinned, middle-aged priest wearing a simple black robe, cloak and hood. Although quite portly, possessed of a receding hairline and a bristly grey beard, his dark eyes are lively with intelligence and good humour. His height, strong nose and square jaw also lend him a noble mien.

This merry priest has the dubious honour of holding the nearly empty parish of Etteldorf for Bishop Wilhelm of Transylvania. He journeyed to Kronstadt in the company of his patron Ulrich the Bull, but aside from a brief interview with Archdeacon Simon to secure his posting, he was decidedly more circumspect in his movements than Ortrun and Theodor. Even Heironymous proved to be more social than the obviously gregarious clergyman. Dolph passed off his seemingly uncharacteristic lack of conviviality as a desire to get to work in restoring the village to its former vitality.

In truth, Father Dolph did attack his duties with great enthusiasm, enlisting the somewhat dim-witted youth Erik before starting with the re-thatching of the roof of the small stone Church of St. Clotilde in Etteldorf. They then moved on to the refitting of the doors of the building, and now work at scrubbing and repairing the stonework that was damaged when the church was fired during the ruinous Cuman raid on Etteldorf in AD 1209. His assistant, Erik, displayed commendable vigour for the work. Indeed, of all the young men recruited to rebuild the village, he displayed the most consistent and hearty drive to see the place return to security and life.

However, despite his incessant good humour, Father Dolph’s expression was a war between hope and consternation when the Teutonic brothers rode through the gates of Etteldorf. Except for the thrice daily mass he conducted at St. Clotilde’s, he has done little to interact with the newcomers to the village, leaving Erik to run most of the errands to their quarters. Indeed, the Teutonic brothers appeared to make Dolph decidedly nervous. Perhaps he worried that they see his over-fondness for the ale of Johana, the sole woman in the camp. Or perhaps it was the way his eyes lingered hungrily on her rump when she walked by.

Whichever the case, Dolph endured their presence for the length of their short stay. And Johana endured Dolph’s lascivious glances, perhaps because he mustered enough will or piety not to act upon them.

He continued to serve his master well once the Ventrue was forced to adopt the guise of his “cousin”, Heinrich, to forestall the blowback from the rumours spread by the wrathful Swordbearer that Ulrich had embezzled funds from the Teutonic crusade against the Cuman horde of Kordönül. Ulrich had to disappear, and Heinrich soon arrived to replace him.

In his capacity as priest of Etteldorf, Father Dolph took the cross, and journeyed to the Holy Land as a pilgrim of the Fifth Crusade. His knowledge of ecclesiastical practices and bureaucracy, as well as his fluency in the tongue of the Langued’oil served his master extremely well in Heinrich’s plans to scout the city of Acre, and later his ambition to insinuate himself into it. It is worth noting, however, that Dolph’s unease with his ghoulish state only increased as his role in the crusade continued, as did his discomfort with the lack of food available in the East due to a series of poor harvests. 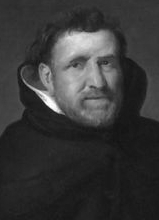