A savage childe and servant of the nefarious Voivode Koban of Vrancea. He was destroyed by the Concord while attempting to murder the boyar of Toth.

This monster’s body was entirely hairless. His mouth was impossibly large and distended, flapping open and closed far more than should be possible; his chin rested on his collarbone when his head was upright. The brute appeared to be incapable of speech, and his nostrils had been sealed shut. He was very tall, and strongly muscled. Bony spurs extended along his spine, his arms and his legs, piercing the rude animal skins that he wore for clothing and protection. He was armed with a hafted axe that appeared to be entirely crafted of bone.

This brutal Tzimisce was sent by his master, Voivode Koban to formally declare the Trial By War against Bodor Toth and his followers. He was to do this by ritually slaying Bodor’s mortal son, Boyar Devald and leaving a message carved into his body. Dominik managed to infiltrate the keep, slaying several of the Boyar’s guards in the process, before encountering Devald in his chambers. His bodyguard raised the alarm before falling to the preternatural strength and speed of the powerful Cainite. The uproar wazs enough to gain the attention of the Concord however, and they rushed to prevent the ancilla from carrying out his gruesome duty.

Dominik failed to complete his mission. He dealt Devald a near mortal blow, but was driven away from him by the coterie. Unfortunately for Dominik, his toughness did not match his strength and speed. Veceslav injured the interloper, while Sir Gunthar ripped his innards out with his claws. The ancilla went to the Final Death then and there.

During the parley with Voivode Koban some weeks later, the coterie discovered that Dominik was not mourned by his broodmates. Indeed, they considered him a fool, good for little other than arrow fodder or a diversion. He was nothing more than an angry youth in life, a peasant whose Carpathian village was raided and razed by Koban’s forces. Embraced because of his defiance and heedlessness of danger, he impressed his oppressor enough to warrant the Embrace. Dominik proved to have an enormous capability for channelling the Beast. For the entirety of his 40 odd years of existence as a Cainite, he followed that brutal and feral path, slavishly loyal to his sire through the bonds of the Blood. He learned little in that time, and rarely had an independent thought. Hundreds, if not thousands, died under his fangs for no other reason than the call of the Beast, and even his broodmates thought him wasteful and crude. In the end, Dominik reaped the rewards for his savage, monstrous existence, dying alone and unloved in Toth Keep, under the claws of a much more worthy warrior. 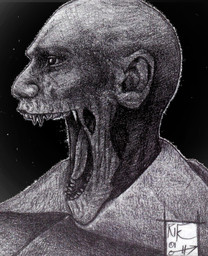