Once the Antonian Palace Prefect, this elder claimed the imperial family as his dominion. For centuries he was one of the most influential Cainites in the empire, but he lost it all in 1204. He is believed to have suffered the Final Death soon after.

A good-looking, fine-boned man with unruly brown hair and intelligent, guarded brown eyes. He was dressed in the finery of a high palace courtier and usually went armed with a bejewelled dagger that was more ceremonial than serviceable.

The Ventrue known as Constantine Ducas was a fixture in the Antonian political landscape since his Embrace in AD 836, having express power over the imperial family since the demise of his own sire, Septima Dominica, at the turn of the millenium. An audacious fellow, he elevated his mortal descendants into positions of power, and even shepherded a number of them onto the imperial throne in the late 11th century. He was also in favour of bringing trusted and capable mortal descendants across into undeath, for no fewer than six times did he grant the Becoming as a reward for good service. They tended to follow suit, and the Byzantine remnant is littered with Ventrue of his mortal family. Although the Ducas dynasty ruled for only 20 years, and Belisarius would soon displace him, the Palace Prefect reestablished the precedent among his kin that youth and energetic verve could change the course of history. He also showed the value of moving slowly and working through layers of carefully groomed intermediaries with absolute secrecy, a mode of operation which clashed directly with that of his own sire who enjoyed direction manipulation and being worshipped as a bloody goddess by the mortals. In his prime, the artfulness of his machinations did much to advance the reputation of the Antonians as master manipulators.

By the turn of the 11th century, he had dropped his first name in all interactions, and was thereafter known only as Ducas. While the intrigue was once thick between he and Belisarius over control of the Comnenus dynasty, Ducas increasingly became more retiring once the Angeli took the throne. By the time of the Bitter Crusade he had long since left the cut and thrust of Antonian politics to others but he guarded his Domain jealously, and more than one upstart felt his power for mistaking Ducas’ quietude for weakness.

The aforementioned intrigue over the Comneni surrounded the succession of John over the husband of his elder sister, Anna. Considerable prestation capital was expended over the matter, yet Ducas evidently lost, for Anna was eventually forced to retire to a convent over the dispute. In the remaining 16 years of her life she penned the Alexiad, a historical and political treatise on her father’s reign. Ducas kept an eye on her, and eventually decided to Embrace her on her death bed once it became clear that the Antonians would lose a vital resource if she were allowed to slip away.

In the final years of the old order, Ducas only advised Anna when expressly asked, and otherwise quietly kept to his own Domain. While it would be a strong statement to say that their relationship had cooled, he was considered a neutral party in the intrigues between his progeny and Nicepherus. Arrogant and resentful of his diminished power, he answered overtures in a purely mercenary and dismissive fashion, gaining him few friends among his fellows. Ducas was a secretive, careful (one might even say paranoid) soul, and none except for Anna knew what lay in his heart of hearts, or what his true goals really were. It was known, at least, that he harboured little tolerance for the Obertus for some reason, but he always deflected enquiries as to why.

When the crisis of the Fouth Crusade arrived, Ducas was found wanting. As far as his portfolio was concerned, his inattention of previous decades contributed to the Angeli being a troubled and weak dynasty. Although his pawns were still firmly in place in the court of Alexius III, they proved incapable of moving quickly enough when the unpredictable sybarite abandoned the city and stole much of the treasury. Alexius IV Angelus was then foisted upon him by events beyond his control, and the young man’s mind was almost certainly already controlled by a lord of the Cainite Crusade.

The Palace Prefect was left to scramble in a vain attempt to cultivate talent within the ranks of his new court while weeding out the bad and the mad. The restored co-emperor and father, Isaac II, could be manipulated through his anxieties, but by virtue of his blindness he was now immune to the more subtle application of the Disciplines. It is thought that Ducas did eventually manage to bond the emperor through the Blood, but even then he proved an ineffectual dupe. Empress-Consort Margaret of Hungary, whose influence over her son was slight, and other venal and incompetent Angeli relatives proved to be a waste of his time. The only reliable dupes at his command were the small army of palace functionaries that had weathered the change of leadership, but they lacked the trust of their emperor, owing to their previous service to the usurper Alexius III.

Ducas was roundly blamed by his fellows for his failure to manage the situation. To be fair, for the most part they failed in their own portfolios as well, but the Palace Prefect’s refusal to join a faction when the weather was fair left him with few friends and little recourse when the city fell in April of 1204. Caius was destroyed by vampire hunters, while Belisarius had little time for those who hesitated to risk their own lives to fight the invaders, and in any case he soon quit the city. There was no love lost between Ducas and Nicepherus, and even his Anna inexplicably broke with him.

Alone, desperate, and friendless, his treasures robbed and his thralls disempowered, dead, or fled, the erstwhile Palace Prefect had few options other than flight. With his few remaining retainers and what was left of his herd, he made his way to the refugee camp that was forming outside the city of Adrianople. Refused entry to the city, he was forced to languish in the tent camp alongside Helena, Urbien, Bardas, Decius, and other Cainites that had no place in the new regime. Paralysed by despair over the coming months, some chose to meet the dawn rather than exist in such a sorry state.

Not so for Ducas. Over the following weeks he made attempts to forge a council of leadership from the Family exiles at the camp of Adrianople. Although his success was admittedly mixed, he found ready allies in Helena and Bardas, while others saw them as a exemplars of the failed system that had brought the disaster of the Great Sack down upon them. When the Templar Hugh de Clairvaux and his followers arrived at the camp in May, some 5 weeks after Constantinople fell, they came to recruit the refugees for a renewed crusade to Egypt.

Ducas disappeared immediately thereafter, followed at once by the rumour that Brother Hugh had taken his head for refusing to bend his knee to the Templars, though some thought that it might have been his arrogant progeny, Romanos, who closely resembled him. The other councillors neither confirmed nor denied the rumour, but their uncomfortable silence along with his sudden absence spoke volumes. After more than 400 years of existence, Ducas of the Antonians has quite likely suffered the Final Death. 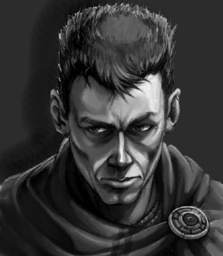