The Lady of Lünedorf and Sankt Wolfgang; a hard-nosed, stern woman more at home tending her farms than attending court. She is wife to Karl Dressler and mother to Axel, Ingrid, Wanda and Bernerd.

A Saxon matriarch, over 50 years of age. Her blonde hair has almost entirely given way to silver, and the first touches of arthritis have set into her fingers. She carries herself as one clearly gentle-born, but her skin bears the colour and lines of someone who has spent many years toiling on the land, and she seems quite fit for her years. Indeed, her dress is little different from that of the commoners of Lünedorf, though it is clearly cut of better cloth.

This matriarch is known among the people of Kronstadt as the Edle von Lünedorf und Sankt Wolfgang, a title which places her above that of a knight or nobleman’s wife and below that of the Burgravine. However, as is the custom among the Transylvanian Saxons, most of whom have dwelt in the Siebenburgen for less than three generations, she officially retains the name of her estate of birth to mark her honours. In her case, Eadith would appear to hail from the estate of Bleckede, a village on the Elbe, some sixteen miles east of Lüneburg.

Like her husband, Karl, she eschews her title on all but the most formal occasions, but unlike him, she avoids such events like the plague. Indeed, the folk of Kronstadt proper might see her once each year, if that. Eadith is far more at home seeing to the good management and care of the property and people of the villages to which her family holds title. She calls Lünedorf and Sankt Wolfgang her gardens and, like any good and humble gardener, she must constantly tend her charges lest they fall into disorder and ruin. She is quite fond of the analogy, having received it from Karl’s late cousin, Sir Gunthar, of whom she was apparently very fond.

The Ashen Band encountered Eadith after an unsuccessful ambuscade mounted by a raiding band of Cuman Gangrel and their mortal retainers. A number of the servants of the Band were severely wounded, and the coterie was forced to seek aid at Lünedorf. The matriarch took charge of the injured, enlisting her daughter-in-law, Tatiana, and her maid, Teresa, in their care as well. While it was clear that none of the women were chirurgeons of any sort, they succeeded capably in their ministrations long enough that the village wise woman of the Vlachs, Madalina, could be summoned. Throughout the course of the stay, Eadith showed herself to be a terse, no-nonsense creature, not without graciousness but more than willing to leave the duties of host to her husband and son. Unlike Tatiana and Madalina, both of whom seemed to show an uncanny suspicion of the Cainites in their midst, Lady Eadith appeared to be just as ignorant of their natures as any other Saxon.

When it was clear that the wounded armsmen in her care were out of danger, the matriarch took the time to exchange pleasantries with the strangers in her house, but she did not engage any of them for more than a few moments before returning to the makeshift infirmary in the great hall. 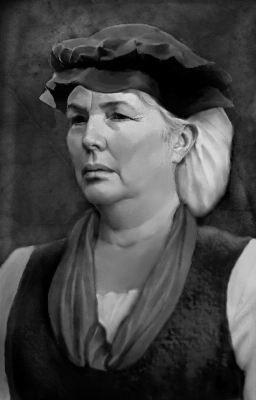