The cautious and secretive Tremere Regent of Kronstadt. Eridanus claims to be interested only in pursuing his studies in secret and filtering supplies to Ceoris, but the few who know of him are suspicious of his intentions at best.

A pale, scholarly man in his late fifties, garbed in the tasteful, well-to-do robes of a master merchant or craftsman. His hands looks strong and steady; his posture square and unbent, despite his advancing years. While his white hair is thin, he wears a beautifully groomed beard and moustache to make up for it. His dark eyes eyes are deeply intelligent, but they have a secretive, pensive quality to them. He is armed only with an ornate, perhaps even decorative, knife.

Eridanus was first encountered by the Concord late in the Winter of AD 1203. After being exposed by the ineptitude of visiting Warlocks Hesintrada (aka Hette von Borcke) and Johnathon of Flanders (who would later be revealed to be Benjamin d’Alson), the Concord visited this Tremere at his secret chantry (located at the Guild of Stonemasons) in Kronstadt. He reluctantly admitted that he had been present in the town almost since its founding, hiding from a succession of princes and their lackeys while quietly pursuing his studies and organising supply for the Great Chantry of Ceoris, some seventy miles distant. During this audience, Eridanus insisted that he be addressed as “regent” of the chantry, even though he readily admitted that he was the only Tremere to reside there.

He explained to the Concord that he had little interest in either the mortal or Cainite political spheres of the Siebenburgen, and merely wished to be left in piece so that he might continue his astronomical studies. He demurred agreement to any overtures of alliance and cooperation with either the Concord or the Council of Ashes, stating that such decisions were best made by his superiors in Ceoris. Lotario and Iulia, however, were not at all convinced that Eridanus was as retiring as he purported to be, given that his haven was also the headquarters of the most influential guild in Kronstadt. At the time, the Concord resolved to adopt a ‘wait and watch’ approach to the Usurper presence in the the city. Doubtless, Eridanus has a similar approach to every other Cainite who comes and goes.

Other than acknowledging their presence, he displayed no interest in the claims of praxis by Karsten von Hornburg and his lover, Greta Bassum. However, when the burgraviate of Kronstadt was transformed into the new political entity of the Burzenland in AD 1211, the old warlock was forced to rethink his isolation. Jürgen von Verden arrived in the city the following year, and it was known that he took a dim view of the Clan Tremere after suffering the ill-considered intrigues of Alexia of Nicosia and Jervais Bani Tremere at Magdeburg. Initially, it appeared that the Ventrue warlord would likely throw the old astronomer out of the city. However, after consulting with his superiors in Ceoris, Eridanus begged a private audience with the Swordbearer and an accord of some sort was struck. While the full conditions of this compact have not been made common knowledge, it is known that the Tremere have pledged to seek no power in the city under Lord Jürgen’s rule, and that Eridanus and all his resources will come to the defence of Kronstadt should the city be directly threatened.

The Ashen Band sought out the regent shortly before they left the city to lift the siege on the Tzimisce castle at Buzău. This they did by correctly, and obviously, surmising that the aged Guildmaster of Stonemasons, Bonifaz Bender, was the old warlock’s ghoul. They then approached Bonifaz and asked for a meeting. In due course, they were admitted to the formidable stone guildhall, and shown to Eridanus’ observatory above it. There they found him in company with 5 other men, most of whom were seen to have grey beards under their cowls. More of a courtesy call than anything else, they informed Eridanus that they would be travelling through the Buzău pass, and worried that they might be attacked by the Warlocks’ Gargoyle servants should they be encountered. As they were all united in the defence of the Burzenland, the Band asked that, as a show of good faith, the regent inform his superiors of their passage so that such an attack might be ruled out. Eridanus thanked them for their foresight, and promised that he would do so. If they were to carry the standard of the Teutonic Order before them, he would ask his elders to see that the banner was respected.

In the years following, Eridanus maintained his seclusion, venturing forth only when summoned directly by the Swordbearer. 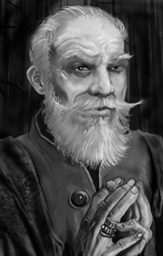