A cruel and sadistic Szekler scout from the fort and village of Bodzaforduló. Present during an ambush upon the Ashen Band, he fled the fight. He was later seen suffering terrible torture in the palace of the Winter Prince of the Fae.

Unnaturally tall and painfully elongated out of proportion, this creature appeared to be in the habit of moving in a crouch. He was clad in furs, leathers, and a very large cloak, all of which was seemingly a patchwork of cast-off clothes haphazardly sewn together. His fangs were particularly notable for their whiteness, cast as they were against a backdrop of broken, rotten, and missing teeth. He was customarily armed with a sabre, a long knife, and a spear.

During the ambush at the mouth of the Bodza (Buzău) Pass, this Nosferatu seemed reluctant to engage the Ashen Band directly, relying instead on hurled spears and javelins to whittle down the enemy. He managed to wound one of Berengar’s serving brothers, and forced a second to cover the wounded man and himself with a shield, but he then switched targets to the undead knight himself. Alas, the Szekler’s thrown weapons failed to pierce either the armour or the supernally tough skin of the Ventrue, and Filip was visibly concerned by his lack of effectiveness. When his own chieftain, Miklós, was subsequently incinerated by a torch wielded by the mortals he had failed to dispatch, the courage of the Szekler scout failed and he fled into the pass, abandoning his fellows.

Lekszi would later say that Filip was never a blood-brother of Miklós, like he and Samuka. A loner at heart, Filip was always more comfortable on his own, living in the hills just inside the mountain pass. Moreover, he was of a cruel bent, even by the standards of the Varganyi clan, and Lekszi never felt entirely comfortable around him. His abilities as a scout, however, were nonpareil among the clan and, in addition, Filip’s capacity for inflicting imaginative suffering on captive and enemy alike earned the favour of the főnök (chief). Miklós tended to heap praise and reward on Filip for his “special role” in defending the pass and thus, the scout was Embraced when the chieftain’s band was defeated, routed and slaughtered by the army of the Cuman ceribasi, Kordönül Khan.

Apparently, Filip immediately took to his new Cainite nature, displaying none of the reluctance that either Lekszi or Samuka felt at being inflicted with the curse of Caine’s blood. His enjoyment of exercising his newfound preternatural powers on the hapless was matched only by the manner in which he seemed to make an accord with his Beast. Indeed, the sadistic neonate even boasted that the Embrace was his destiny, foretold to him by his aunt, who was well versed in the hearth wisdom of their people. The scout would sometimes speak of the Mosi de Iarna , “the winter ancestors”, and how one night he would take his place among them. Lekszi speculates that these ancestors are the “Wild Ones” (Fae), who are responsible for the unnatural cold that permeates the valley of Bodzaforduló and the mountain pass, and it was to them that Filip fled.

The supposition turned out to be correct. When Lekszi took the Ashen Band deep into the valley to speak with the Winter Prince Iamazis at the Keep of Razors, Filip was seen there. Impaled on a shaft of ice and bound in his own entrails, the cruel Nosferatu seemed to be paralysed by the magics of the Fae, but the agony in his eyes and the silent, frozen scream on his cracked lips gave the tale as to the extent of his torment. Several of the monstrously beautiful Mosi de Iarna were taking turns flaying his skin and amputating his limbs. Iamazis himself tore Filip’s tongue out at the root to make a short-lived talisman for the Ashen band so that they might give their oaths to replace the seals on the pyramid mountain.

The Ashen Band soon left the Keep of Razors, suitably chilled by its horrific sights. It is unlikely that Filip survived the ministrations of the Winter Ancestors for much longer, although none among the coterie wasted more than a few moments of speculation as to his eventual fate.

Lineage: Childe of Miklós Varganyi (d), Childe of Hyacinta, the Hag Princess, Childe of Gutka, the Salt Queen, Childe of Baba Yaga, the Iron Hag, Childe of Nosferatu. Filip was of the 8th generation. 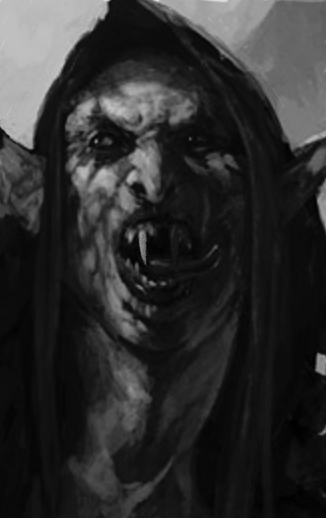