This neonate is the most aggressive and bloodthirsty of the Brood, vicious both in battle and the hunt. She is, nonetheless, an ally of sorts to the Concord and the Ashen Band.

A small urchin, swathed in rags and a heavy grey winter cloak. It might be mistaken for a child at first blush, but the stumpy nature of its arms and legs give the creature away as a dwarf. Although she tends to keep her cowl pulled low, every now and then the little one looks up, showing off her green skin, ruined nose, hare lip and sharp fangs. Her eyes gleam a predatory red in the darkness.

Fritzi was the youngest member of the Brood of Hermannstadt with which the Concord grew familiar in AD 1214. Although neither Maude nor Svenin warmed to the little monster, her clanmate Sága would eventually crack the dwarf’s crass and brutal shell when Fritzi and Nicu later joined Lord Jürgen’s campaign against the Gangrel warlord, Kordönül.

Easily mistaken for a starving street urchin or camp follower, this Nosferatu tends to use her Mask of 1000 Faces power to appear as a cold, hungry child huddled for warmth against the elements. Of course, her pitiable appearance and demeanour belie her actual nature as a cruel, cunning and bloodthirsty Cainite, enamoured of random violence and quick to listen to the hungers and other base needs of her Beast. Of all the Brood, she was also the only one to be unsure of her road, despite having walked the via bestiae for the best part of 2 decades. Perhaps her demonstrably bloodthirsty behaviour is simply an over-compensation, making up for her tendency to look after the poorest and most pathetic mortals of her chosen city in direct contravention of the ideals of her grandsire and the other Nosferatu. Or mayhap the Road of the Beast is a good fit for this particular Cainite, and she simply enjoys playing with her food. Whatever the case, Fritzi is occasionally prone to uncharacteristic bouts of kindness (which she is not quite so good at hiding from her fellows), even though her first instinct appears to be snide, cruel and sarcastic comments at best or wanton murder at worst.

It is known to the Concord and the Ashen Band that she grew up a ward of the Church, abandoned by her parents for her deformities and used as an object lesson of original sin by the clergy. The tyrannical priest would often beat her, as well the other orphans in his care, for the most minor of sins. By the time her guardian, Father Ruprecht, brought Fritzi and his other wards to Hermannstadt in the late 1150s, the teen-aged dwarf had had quite enough. She fled the rectory and chose to live rough on the streets of the town, then more of a swollen mining and trading camp than a true settlement. She begged, stole, and worked as a prostitute when she could find a man who would have her, all the while hiding from Ruprecht and the formative town guard. Despite her diminutive size, she developed an enviable proficiency at hiding, leaping, tumbling, and hand-fighting due to those hard years. This she managed for the best part of ten years before Marusca made her a ghoul, all the better to keep a close ear indeed to the ebb and flow of the streets of the growing town. When Ruxandra was brought across in the mid-1170’s, she assumed responsibility for the dwarf, and the two became fast friends over the years, brought together by their shared legacy of formative abuse.

Ruxandra would “gift” Fritzi with the Nosferatu Embrace in AD 1187, crowning the evening with allowing the new Cainite the honour of taking Father Ruprecht’s life. The priest was very old, infirm in both body and mind, hardly cognizant of the full horror of his situation. Even so, the dwarf still relished the pleasure of making him beg for what little life remained to him, before she stole it away in cruel bits and pieces. Ruxandra would return the fledgeling to Marusca and Nicu 4 years later, when she made her way to Mediasch in order to rule that domain in secret. Over the many years since, Fritzi has been a stalwart member of the Brood, having fought against the Hell Hounds in many skirmishes, and representing her prince in the campaign against Kordönül.

During the Battle of the Black Cave, Fritzi managed to keep up with the headlong charge of the Brood, tumbling off rocks, branches and even her fellows as she eagerly sought to be the first to claim the unlife of one of the hated followers of Marelle. Unfortunately for her, other than the mutated dog and wolf hell hounds that she ripped through with murderous glee and bewildering speed, the first enemy Cainite she encountered was the formidable Corneliu, who spitted the dwarf on his spear. Pinned to the ground, she was defenceless as the hell hound ghouls tore into her, and Ruxandra was also nearly destroyed by Corneliu when she threw herself upon her beleaguered childe, hoping to shield Fritzi with her own body. If not for the threat that the powerful*Tzimisce bandit lord perceived in the Concord, both Nosferatu might have met the Final Death right there. Luckily for them, he pushed forward towards Maria and Brother Adalbert, shortly meeting his match in those worthy Cainites.

In the wake of the battle, an alliance of sorts was forged between Marusca and Jürgen, geared towards further isolating her of Nova Arpad’s wrath, and granting him some potent allies used to conducting war against the Tzimisce. Both Fritzi and her mentor, Nicu, agreed to join his campaign against Kordönül, and soon arrived at the Swordbearer’s camp to assist Akuji and Sága with spying and scouting duties. Their understanding of Animalism and ability to screen Lord Jürgen’s camp unseen earned them the favour of the Ventrue, and when the Ashen Band later left the campaign and returned to Kronstadt, Nicu and Fritzi remained.

Over the following years, the two Nosferatu would continue to represent their prince in the same manner. They travel together, ranging between Kronstadt and Hermannstadt, and also among the Cumanian settlements that fall under the dominion of the Teutonic Order. Masterful scouts, they have become quite skilled in the use of their Animalism and Obfuscate disciplines to reconnoiter the region and report their findings back to Akuji, Marusca, Karsten von Hornburg, and Lord Jürgen.

Embrace: AD 1187. Fritzi spent some 2 decades as a ghoul prior to her Embrace.

Lineage: Childe of Ruxandra, Childe of Marusca, Childe of Zelios, Childe of Hannibal; of the lineage of the Hag, also known as Baba Yaga. Fritzi is of the 10th generation. 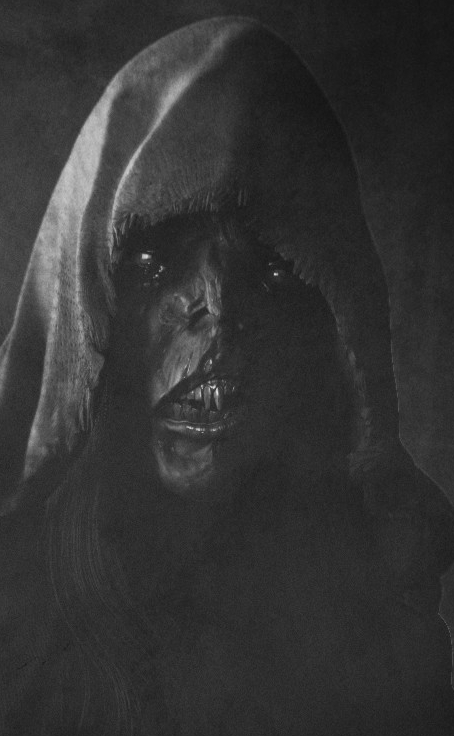