A breath-takingly beautiful lady of the Clan of the Rose, this ancilla was notorious for her degeneracy. Before the Great Sack, she barely held onto her status as a Michaelite, and in its wake she was left a desperate outcast. She finally left in 1205.

This lady is simply stunning, rivalling Anna Comnena for the most beautiful among the Cainites of Constantinople, yet unlike the Antonian Quaesitor her allure is boldness and vitality rather than regality and grace. She wears the latest in Byzantine court fashions and veritably drips with jewellery.

(this is an expansion of the character as set down in Dark Ages Clan Novel Settite).

In times past, the Michaelite Quaesitor, Petronius, often referred to his progeny Galatea as his “last and greatest mistake.” A daughter of Cypriot nobility, she was sent by her father to the imperial court of Alexius I Comnenus to gain an education and the possibility of an advantageous marriage. Graceful, stylish, witty and beautiful beyond belief, she instantly earned a place for herself as a favourite of the young Empress, Irene Doucaena. Her love of poetry and zest for life caught the attention of Petronius, who was utterly entranced by her. He moved quickly to bring her into the ranks of the Michaelites, before her beauty and promise were marred by age or care.

Giving her the full benefit of his centuries of experience in the arts as well as the finest tutors that his money, influence, and supernal prowess could obtain, he sought to craft Galatea into the perfect Michaelite. In truth, it is likely that the Arbiter was more than a little in love with his student, or at least her potential, for the circumstances of her embrace drove him into a fury quite alien to his placid nature, for the truth is that Petronius is not the sire of Galatea at all. Indeed, her true sire is the former muse of Sculpture, Paul Bathalos, and the circumstances of her Embrace were a violation. Posing for the muse, Galatea’s beauty overwhelmed Paul, who in his zeal for his craft had neglected his hunger for several weeks. He frenzied and attacked her, draining her dry before he found his reason once more.

Aghast at his actions, Bathalos gave her his blood, thus bringing her across into undeath. When Petronius discovered what had happened to Galatea, he would have attacked his consanguineous brother in a rage but for the personal intercession of the Patriarch. Michael favoured Paul with his affections at that time, and settled the matter without punishing him other than awarding Petronius with the fledgeling and demanding that the Muse of Sculpture provide the Arbiter with a number of his greatest works in compensation. To cover the shame of the lapse, the transgression would be kept secret. Galatea’s memory of the event was altered, and she was introduced to the city as the progeny of Petronius. Initially, no one outside the muses was aware of what had truly taken place, but over many years, the gossip-prone, petty Michaelites would let the secret loose to this elder or that. For her part, Galatea remained ignorant of the truth of her Embrace for many, many years.

Throughout the first half of the 12th century, Galatea served her adoptive sire well, her courtly manner and aristocratic connections making her a frequent intermediary between the Michaelites and the Antonians. Her grace, breeding and tact, as well as her quiet connections with the Comnenuis dynasty, made her a natural choice for the role, and Galatea prospered in the Arbiter’s service. Petronius lavished attention on his childe, and their relationship was unusually warm even beyond the bond between sire and progeny. He taught her his secrets freely, and she advanced quickly for one so young.

Alas, in time the secret of her Embrace found its way to her ears, and tormented by the rumour she confronted both of her sires. Neither denied her charge of duplicity, although both pleaded with her that the best was made of a bad situation. They asked her forgiveness, but she fled in tears. Her status was ruined by the gossip of her ignorance of her Embrace, and her heart was broken by their lies and betrayal. For weeks she languished in hiding, unwilling to countenance the embarrassment of her situation. Then she received a visitor in Sarrasine, a prominent elder of the Children of Judas.

Like many of the Michaelites, she had long been enamoured with the excitement and forbidden pleasures of the Silk Road, but her loyalty to and love of Petronius had always served as a bulwark against her baser instincts. Her carnality had lain buried under the high-minded ideals to which she clung, but she had often watched the mesmerising Sarrasine from afar. His freedom and sensual abandon had entranced her for many years, and now he had come to offer surcease from her grief. At a loss for what to believe in, she accepted, and Galatea soon lost herself in the debauchery offered by the Settites. She was one of the first of the young Toreador to fall to the wiles of the Children of Judas, and her status as a young leader regrettably lured many of her brothers and sisters into Sarrasine and Khay’tall’s web.

In time, she became every bit as adept at ensnaring the hearts and souls of others as any Settite. One who fell into her honeyed web was Lotario Acuto, a hapless mortal entranced by her beauty and her Presence. She would Embrace him without permission, and he was soon captured by the Baron’s Gangrel and, solely by the intervention of Petronius, allowed to live. The ancient Toreador sent him to friend’s abroad for his education, but privately he hoped that the fledgeling might be the tool that would allow the Arbiter one last chance of saving the daughter of his heart. Lotario was given instructions to return when he was ready.

After more than 50 years of excess and failure to live up to her promise, Galatea had all but exhausted the patience of the elders among the Michaelites. After trying to bring her back into the fold for decades, the Arbiter eventually gave up, and all but disowned her for her disgraceful behaviour. In turn, she showed her scorn for him by loitering around his workshops as much possible, as if to flaunt her fallen state. She still received invitations to the Antonian Blood Feasts, and usually turned up on the arm of Sarrasine. It was not at all uncommon to also find her at the more degenerate Blood Feasts of Bishop Alfonzo of the Narsene Lasombra. The Silk Road was practically her haven, and she organised many of the more exotic orgies that took place therein.

Through the debacle surrounding the arrival and occupation of 4th Crusade at Constantinople, Galatea was numbered among the throngs of Cainites who had no understanding of the threat camped outside their walls. Almost simultaneously with these events, Lotario Acuto returned. Still in love with his sire, he worked to win her heart and soul away from Sarrasine, but he found that while her heart was (secretly) willing, she had neither the will to resist the Settite, nor the inclination to abandon her licentious and petty ways. More than once, she denounced him and humiliated him publicly over the coming months and when she finally did flee to her progeny, she soon broke his heart and returned to the Silk Road when her addiction to Sarrasine overcame her good sense. When the city later fell, and the Great Sack followed, Galatea was caught unawares. Khay’tall was murdered, and after making a dramatic scene of grief and innocence, Sarrasine fled the city without so much as a word to his lover of decades.

In shock, she turned to the one person who had always promised to stand by her: Lotario Acuto. She found him weeks after the sack, only to find his heart had finally hardened against her. Rather, he turned his back on her and told her to find whatever end she deserved for her own heartlessness.

For many months, Galatea scratched a poor living in Constantinople before she attracted the notice of an English vampire by the name of Ewald Fairfax. A pilgrim of the 4th Crusade, the Ventrue neonate had failed to establish himself in the new order of the Latin Empire, and together with his fledgeling bride, Tsarika, he desired to return home to his sire in the Low Countries. However, the feckless fool did not even speak the language of his beautiful bride, and he was relieved to find that Galatea did. She promised the callow Ewald that in return for his protection and patronage, she would serve him as a translator, and also a guide and facilitator in the Byzantine successor states.

By April of 1205, she had managed to make introductions between her charges and Lord Valerian, the elder Ventrue statesman of the Grand Court of Paris. Ewald called upon the traditions of the clan to ask sanctuary of Valerian, who reluctantly then made travel arrangements for them in the caravan of the Settite merchant, Andreas Ægyptus. The caravan departed Adrianople the following month, making the long journey through Bulgaria, the Balkans, Croatia, and beyond.

It is known that Galatea, Ewald, and Tsarika did not travel further than the city of Aquileia before they left the caravan. Instead, warriors of the Kievan Rus’ met them there and took all three to the north and east, presumably on a long journey to the Tsarika’s homeland. Both Galatea and Ewald seemed pleased enough, even worshipfully happy, with the new development.

The three of them, together with a Ventrue of the Rus’ named Andrei Dmitrievitch and many guards, asked for the hospitality of Veceslav Basarab at his castle in the Tihuta Pass in the summer of 1208. The observant knez noted that Ewald and Galatea appeared to hate each other, but they both adored the Tsarika Fedora Anna Romanovna (the neonate’s proper name) in a manner indicative of the Blood Bond. Andrei Dmitrievitch told the knez of Tihuta that they were on their way to the domain of his master, Prince Danylo Igorivitch of Halych. The party stayed 3 days, and then made their way north.

Galatea has not been encountered by any among the Concord in the many years since that summer.

Lineage: estranged adopted childe of Petronius and actual childe of Paul Bathalos, childe of Michael the Patriarch, Childe of Arikel. Galatea is known to be of the 6th generation. 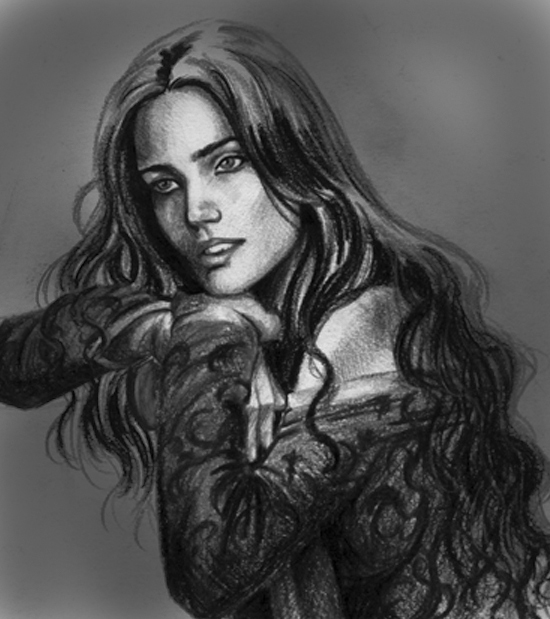