This elder is a broken wreck of his former glory. Centuries ago he was the Michaelite Muse of Sculpture, but he came down very far in the world by the the time of the 4th Crusade. Revealed as one of the outlawed Chosen of Calomena, he then fled the city.

A slender, pale man in faded finery who might be considerably more handsome if he looked after himself and smiled instead of sneered. His hair is lank and unkempt and his eyes bloodshot, as if he were suffering from a permanent hangover. Nonetheless he has a certain rakish charm to him.

(modified from Constantinople By Night, p. 106)

An aspiring sculptor of great potential, this Roman Toreador was one of the first to throw his support behind the Triumvirate and journey to Byzantium in search of the Dream. He served faithfully as the Muse of Sculpture for over 200 years before he left the city behind, proclaiming that Michael’s stultifying and overbearing influence was destroying the creativity of his artisans. Gallasyn returned to Europe and wandered until the middle of the 7th century, looking for something to latch onto that might replace the glory of the Dream and the love of his Patriarch. Instead, he found only darkness, hopelessness, and danger where Roman civilisation had once stood.

Too late he had realised his error, and when his pride was finally exhausted he journeyed back to Constantinople and the Patriarch, to ask for forgiveness and re-admittance into the Michaelites. In his former position he found his rival Endymion enjoying Michael’s favour, and the Archangel himself was in no mood for mercy. Claiming to still feel the pain of Gallasyn’s betrayal, Michael denied the penitential sculptor’s request. Khay’tall interceded on his behalf, however, and adopted Gallasyn into the Children of Judas.

Miserable in exile from Michael’s favour, Gallasyn was the first of his ilk to fall to the temptations of the Children. For more than 400 years, he existed as a lowly member of that despised Scion family, often slipping in and out of torpor for decades at a time as he became more and more jaded. Always he hoped that Michael would relent, and he would find his place in the Dream once more, but the Patriarch never summoned him. By the 9th century, he had ceased producing any of his art at all, and by the 10th he was a pathetic remnant of his former potential. The Children gave him the opportunity to find oblivion without Final Death, for he lacked the courage to meet the Dawn. Their vices offered him mindless comfort and allowed him to retreat into his carnal nature.

The Children of Judas eventually left Gallasyn by the wayside, having exhausted his potential for depravity. Cast adrift once more in all but name, he drifted among the throngs of the poor districts for many years before becoming an advisor to the Narsene Lasombra when the late Elizio’s replacements arrived in the city. By the turn of the 13th century, even they had little use for him, although he was still associated with the Venetians. He partook in Bishop Alfonzo’s orgies and Blood Feasts, stalked with mortal rape gangs in the slums, and spent a great deal of time in the Silk Road’s hashish den where he lost himself feeding on drug-laced vitae.

Gallasyn briefly met the formative Concord in 1196, when they were investigating the murders of Bishop Alfonzo’s childer, Adriana and Juliano. He was deeply affected by whatever opiate-laced blood had taken his fancy that night, and to them ranted about his former glory, and of how Michael’s dominating presence had destroyed the creativity of his muses. The fallen one was then struck by some particularly fine boots worn by one of the Saut Aswad’s customers, and wandered off to slake his appetites once more. In general the coterie of neonates and ancillae were disgusted by his fallen state, not just because of the heights of his former exalted station, but because a vampire who claimed to be well over 800 years old had come to be such a pathetic and useless leech.

He would be encountered, noted, and safely ignored several more times over the months to come. Likewise, he was seen and avoided in 1203 and 1204, when the now prominent young coterie accompanied the 4th Crusade to the Queen of Cities. The perceptive Sister Maude Khlesl noted that he seemed more deliberate and less addled over those months, but otherwise none of the Concord had any interest in interacting with Gallasyn.

The reason for his newfound focus became clear in February of 1204, when an investigation led by the Baron’s Gangrel and assisted by the Concord uncovered that their foes of AD 1196, the Chosen of Calomena, still existed and had only grown in strength over the years. Tracking depredations on the poor people of the Seraglio, several of Feroux’s Gangrel and the Concord stumbled upon an initiation ceremony being conducted by Stanislav, but they were discovered in the process. Greatly outnumbered, the allied coterie was forced to flee through the District of Arcadia, and they only narrowly escaped the enemy. Chief among those who led the hunt for them was Gallasyn, whose mastery of Auspex and Celerity made him a difficult vampire to shake. Several or perhaps even all of the Concord might have met their end that night but for the intervention of Sariel, the Spathi tou Theou of the Michaelites. Reinforced by many of the Baron’s Gangrel and several of the Brujah, they returned to the site later that night, only to discover that the Chosen had fled. Worse, they had covered their tracks so well that they could not be found. For his part, Gallasyn went underground with the rest of the cult.

Weeks later, on the awful 2nd of the Great Sack of Constantinople, the Concord encountered the Chosen of Calomena one more time. The cult had been moving in force through the city and, bolstered by Family converts such as Theophilus, Dorotheus, Basil, and Gallasyn, they were spreading the chaos by lighting fires as they went. The knowledge that senior senators of the Lexor Brujah and a prefect of the Antonians were in league with the cult explained much of their ability to move about the city at will. Clearly, Family members had been covering their tracks. Disgusted by the wanton destruction the enemy coterie was causing, and spoiling for an end to Stanislav and his pernicious cult, the Concord ambushed the Chosen. Weakened by lack of blood, and down a number of their members from earlier encounters, this time Chosen of Calomena were quickly outclassed and thrown down.

Nearly all of the cult was either destroyed or taken prisoner; leaving only Gallasyn and several ghouls to escape. Badly injured by Agmundir the Cunning, his newfound faith in Caine’s Dark Sister was clearly found wanting, for the Toreador elder made use of his Celerity to flee faster than the quickest of the Concord could follow. As for the ghouls, one ran when confronted by the Dread Gaze of Brother Adalbert, and his twin followed suit out of a sense of self-preservation.

Gallasyn was not encountered by the Concord again. Rumour has it that he fled north, to Adrianople, where he despondently languished in the Cainite refugee camp for several years. Eventually, he joined the caravan of the Malkavian Ashen Priest, Anatole, and took the road to the West. Nothing has been heard of him in many years.

His sire, Enasius, was a noted artisan of the Roman Principate who was active in the city of Ravenna. He has not been seen since the fall of that city to Theoderic in AD 493, and he is believed to have been destroyed. Enasius’ sire, Herodian, was a noted historian and biographer in the early Principate. Embraced in Rome, he dwelt in Constantinople for many years before returning to his native Syria in the late 4th century. He ruled the Cainites of Laodicea until the Arab invasion, whereupon he fled to Cyprus, where he is thought to remain to this night.

His sire in turn, Enimachia, was for centuries the Prince of Damaskós, and the founder of the Damascene Michaelite Scion family. As the premiere Michaelite of the East, she was expected by her own sire to keep the Dream strong in the Levant, but she failed (understandably) to do so when the region was swamped by the Arab invasion. She was eventually ousted by her our progeny, Darshuf, who converted to Islam when she would not, but her failures were not forgiven when she returned to Constantinople, and her sire, Michael the Patriarch, turned his back on her. In disgrace, Enimachia took ship for the West, and soon disappeared from the pages of Cainite historians. She is thought to have either gone to the Final Death or else changed her name centuries ago. 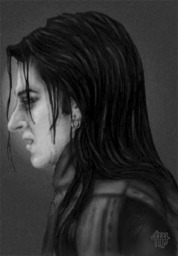