The late Prince of Zara, this Malkavian was extremely paranoid, and prone to fits of amnesia as well. He was destroyed amidst the Venetian retribution of April, 1203.

This man had a dark enough cast to his skin that he might be of Moorish or Grecian descent. His dark hair was short, and his thick goatee beard groomed passably. His face wore a permanent scowl, and his eyes darted from thing to thing without end. He kept up with local fashions, managing to look stylish rather than foppish. His quickness of step looked slightly comical given his paunch.

(modified from the character as set down in Bitter Crusade, pp.86-87)

Gari, the Mad Prince of Zara, was an ally and patron of convenience for the Concord during their brief stay in the occupied Dalmatian city. Advocating for the “defenceless and humbled people,” who would be the first to suffer if the 4th Crusade continued to occupy and destabilise his domain, he strongly encouraged them to take the Szekler saboteur, Erzebet, back to Transylvania in hopes of negotiating a peace with Bodor Toth. In return for their efforts, he promised them a generous slice of the profits from his next “mercantile” cargo (due the following summer) as well as domain in Zara as his subjects.

Almost nothing is known of Gari before he arrived in Zara in AD 1180, but he was swiftly awarded domain by then prince, Cosimo Lucretia of the Narsene Lasombra of Venice. Cosimo a favoured grand-childe of Narses himself, was skilled at manipulating the legitimate trade interests of Zara, but had little experience dealing with the Dalmatian pirates and smugglers that plagued the region. Gari, who had many contacts among those very same crews, proved very useful to Cosimo, and was a welcome addition to the city despite his apparent amnesia prior to setting up those interests.

His extreme paranoia was also a point of vexation for Cosimo, but it happened to save Gari in 1186. When the people of the city rose up in revolt against their Venetian overlords and threw in their lot with the united kingdoms of Croatia and Hungary, they rioted through the streets, turning out and even killing dozens of wealthy Venetian merchants. Cosimo, his own childe Anna Lucia, and indeed every other Cainite in the city other than Gari, were destroyed in the chaos. When the smoke finally cleared, the unaligned Malkavian declared himself the new prince, broke with the Narsene Lasombra, and in their stead pledged his loyalty to Bulcsu, “King of the Arpads.”

For almost a score of years, Gari shepherded Zara into greater prosperity, and came to think of the city and her people as ‘his.’ Two childer, Flavijan and Teofila, were Embraced to cement his prestige and help him rule. And yet, he never felt safe with Venice being so much closer than Esztergom. He displayed his paranoia to the Concord on at least one occasion, claiming that the Venetians were “out to get him” for propelling Zara into such a prosperous rivalry with La Serrenisima. When the crusade was diverted to his city late in 1202, it would appear that his worst fears were realised.

During the Sack of Zara in November of 1202, Teofila was killed when Gari’s primary haven was burned, and Flavijan went to the Final Death trying to protect the wealth of his mortal relatives. While not at all pleased with the fact that the crusade had humbled him and destroyed much of his influence, it was the loss of his court and his progeny that grieved him most. In order to protect himself, he immediately surrendered to Guy of Provence, reasoning that the Ventrue would protect him out of a sense of honour. Gari gambled correctly, and the Malkavian’s willingness to capitulate and throw himself on the mercy of the crusade saved not just his unlife, but his title. Guy of Provence was quite displeased with the foolish Venetian assault on the walls, and furious with its instigator, Salvatore Varagine. The Ventrue was happy to humble the Lasombra further, and deny his designs on the princedom of Zara.

Gari, much reduced in power and forced to make his haven in a butchery, managed to remain prince of Zara for the entire 5 month occupation by the crusade. Alas, his initial meekness eventually gave way to ever greater anger, driven by his paranoia, and eventually Sir Guy found greater advantage in ignoring the erratic prince. By the time the majority of the fleet sailed for Corfu at the end of March, Gari was once more without allies in the city. He still had his mortal street gangs and a few smuggling contacts, but he must have been counting heavily on the Concord to provide further aid.

Upon their return several weeks after the fact, the Concord’s audience with Bartolemeo Giordani, the new Narsene Lasombra prince of Zara, yielded a tale of Gari’s demise. When another riot broke out at the start of April, the Malkavian apparently left his haven to stoke the anger of the Zarayans with his disciplines, futilely attempting to drive out the Venetian Cainites. Instead, the Venetian garrison proved to be far too strong for the rebels, and they razed much of the city in retribution. Gari himself was spotted by some knights hell-bent on hunting diabolic influences on the crusade (rumoured to be led by Sir Gauthier as well as his Templar and Hospitaller allies). They followed the Malkavian back to his haven, butchered the thugs that guarded the place, sealed the exits and burnt it down around the prince.

It also ended the hopes of several among the Concord that they could reap the benefits of domain and prestige in the city. Bartolemeo extended an invitation for anyone willing to aid him in rebuilding the city, but made it clear that any boons owed to them by his predecessor went to the Final Death along with Malkavian. A moot point, since he too would reportedly go to the Final Death within a few years.

Embrace: Unknown. Gari had no memory of his activities before 1162, but his proficiency in the powers of the Blood would indicate that he was ancilla of considerable vintage.

Lineage: Unknown. Gari did not provide one, and according to rumour had no memory of his sire in any case. He placed himself among the 7th generation. 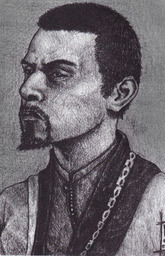