A brutal, Feral Tzimisce warrior of the Northern Blood; he is fanatically loyal to his sire and Voivode, and an uncompromising ally of Bogdan Basarab.

An ugly, brutal, beetle-browed, angry looking Romanian covered in filth and blood, with greasy black hair and mean brown eyes. Bone spurs erupt from his frame here and there, and his fingers end in long claws. In spite of his shabby appearance, his mail is reasonably well-kept, and his hafted axe looks quite sharp.

More animal than man, Gorgu earned the Embrace purely as arrow fodder for his master, Knez Victor Armanaş of Baia. His low cunning, ferocity and talent for survival against tall odds has earned him the esteem of his sire, at least enough to give Gorgu the chance to advance into the service of Victor’s uncle-in-blood and liege, Voivode Mircea Dzardescu.

He is a loyal second to Bogdan Basarab, believing that such is his place; this loyalty is reinforced by the Basarab’s willingness to allow Gorgu to revel in his bestial and carnal nature. His niche within the coterie is his pure, bestial ferocity and willingness to lead men to their deaths (and his own) for no other reason than his joy of battle.

Gorgu and his thugs are the best muscle that De Nord Sânge can muster. During the abortive Trial by War against them, the Concord observed that Gorgu led the largest contingent of troops against the tower, mostly mounted mounted raiders of Pecheneg extraction with a few ghoul sergeants that bore a distinct family resemblance to Gorgu himself. 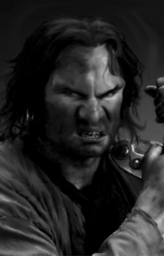