A Lorekeeper of the Road of the Beast, this elder is so old he can not truly guess his years. While not necessarily among the strongest of the Gangrel roaming the fringes of the kingdoms of Europe, he is often accounted the wisest by his clan-mates.

An old, old man, his wizened face so pale as to appear as white as marble. His grey beard his old and tangled, as his long, somewhat thin hair. Yellow eyes, slitted like those of a cat or a serpent, seem to be somehow merry despite their inhumanity, and under his heavy moustache a mouth full of jagged teeth is fixed in a grin. He is langourous, cat-like in his movements. Bare-chested, his torso and arms are covered in fine grey fur, which can also be seen on his bare, clawed feet beneath an old pair of trousers. Affectedly, the old monster wraps himself neatly in a blanket.

(This character is an expanded upon that which is presented in Dark Ages Clan Novel Gangrel and the Road of the Beast).

Grandfather’s Boast: I am called Grandfather, for all here are young to me and many have sought my comfort and guidance. My sire is Gwyedd, who was begat by Burrukam, called the Stranger, for he was first among our kind to reach the northern forests and find the western sea. I know not how many years I have seen, nor how many years I have slept. When I was first Blooded, there were no cities in the west and the empires of Greece and Rome were but a dream of frightened men in their hovels. I keep the Lore and sing the tales, and I remember for those who cannot do so any longer. I show the way to the Road of Beasts, and counsel those who wander from their path.

If his boast is to be believed, the ancient Feral known simply as Grandfather has haunted the wilds of Europe since before there was an idea of Europe. Probably the oldest of the Gangrel currently active throughout the lands between the Atlantic and the Black Sea, including Lucien, Arnulf, and Ikkenai, all of whom have recounted at Gathers or in conversation that he was already an elder of uncounted centuries when they were young. Perhaps Oderic rivals his age, but neither of them care enough to work out who carries the dubious honour of being the more aged, and in any case, Oderic’s travels take him much farther than the bounds of Europe. Whatever name he answered to upon his Embrace has long since been lost to him, for all have called him by the respected title of Grandfather for as long as he can remember.

Grandfather was first properly met by the late, lamented Bernhard Billung at a Gather not far from Tihuta early in AD 1198. He watched with some awe as Grandfather answered the challenge of Milov Petrenkov, an ancilla noted for being a consummate hunter and terrifyingly effective fighter. The two Gangrel fought tooth and claw, with incredible speed, strength, and savagery, but Grandfather ultimately lost the bout. He suffered defeat with good humour despite the dreadful injuries he had suffered, and he was proud of Milov, with whom he had spent considerable time training in the past. From that point forward, only Arnulf would stand higher than Milov in the esteem of the Gangrel of Transylvania. For his part, Grandfather was quite content to be “ranked” below the much younger vampire at the Gather for after all, a leader he is not. Rather, the old one is a teacher, a mentor, and a guide.

As a Lorekeeper of the via Bestiae and as a sage of the Gangrel, he straddles his two-fold responsibilites with a kind of gleeful aplomb, often spending a month here or a week there with those who genuinely wish to advance on the road, or discover something of the history of the clan. He is at his best, and his happiest, when he has a Gangrel Feral to teach, as well as to learn from, and he is particularly drawn to those of his kind who have an “extraordinary Beast” in some way. Indeed, Grandfather is said to know many special tricks of the Blood, and he is known to have taught a few of them to others whom he considers to be worthy of such knowledge. Sometimes he asks for something in return, and sometimes he merely asks that the student pursue their journey along the road with greater energy and dedication.

On that particular occasion, like many of his clan-mates the childe of Lucien was entranced by the tales told by the ancient one. Bernhard recognised Grandfather as a Gangrel with cat-like eyes who had pulled him out of the depths of a wild frenzy some months earlier, and both intrigued and grateful, he was quick to show his respect to his elder. Grandfather was tickled to hear that the ancilla was the progeny of Lucien the Roman, whom he had known for a “a good while” some centuries before. Indeed, the old one cryptically remarked that it was a great sadness that the Roman had come to reject his Beast, for he was a far more interesting vampire with it “at his side.” He encouraged Bernhard in turn not to seek to control or repress his Beast as his sire had done, for he would never reach his full potential if he cleaved to the “limited” via humanitatis.

Many years later, Grandfather would be encountered again. This time, it was Svenin the Tall who met him at a Gather near Ploiești, a town that had been utterly devastated by the Gangrel warlord known as Kordönül. Indeed, the “Wolf of Hell” himself attended that Gather, and although Arnulf still sat higher as the strongest Gangrel there, many of those present were in the camp of Kördonül. Grandfather was not one of those, although he appeared to be delighted and fascinated with the puzzle of the warlord’s “very unusual Beast.” He did not enlighten the viking as to what made it so, and in any case, Svenin was preoccupied at the time in his pursuance of business of his own with the Ceribași of the Cumans.

Embrace: Unknown, since years were not kept when he was brought across many centuries ago, he has long since given up counting the seasons, and he has spent centuries at a time in torpor. He claims that he predates the cities of ancient Greece and the Kingdom of Rome, though, for there was nothing there but villages when he was already an elder. That would place the year of his Embrace at least 1000 years before the birth of Christ.

Lineage: Childe of Gwyedd, Childe of the Stranger, Childe of Ennoia. Grandfather places himself among the 6th generation. 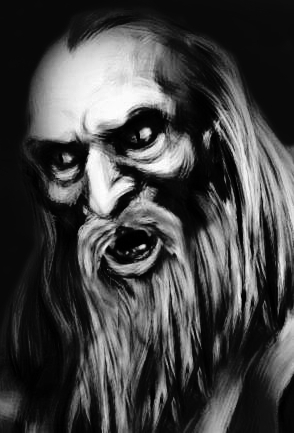