Bishop Alfonzo's bodyguard and Flagello Principale, this smug Lasombra ancilla was one of the most powerful Cainites of the Latin Quarter. He was reportedly destroyed during the Great Sack of 1204.

Gregorio was a handsome, slender Italian, commonly dressed in fine damask and armed with a broadsword and a dagger. A vain man, he enjoyed the spectacle of splendour and power that he produced when he patrolled the Venetian and Amalfitan districts, or lorded Alfonzo’s wishes over the Pisans and the Genoese. He typically wore a confident expression, and there was a smug air about him.

Gregorio came a long way from his humble beginnings as a street urchin in Venice. He caught the eye of Alfonzo while picking the pocket of one of his cronies, and had the nerve to wink at the elder before trying to flee. The bishop summoned his shadows to catch the boy, and after teaching him a lesson in humility, Alfonzo took Gregorio on to see what he could make of him. The lad showed promise as a liaison with his fellow street thugs, grew into a fair swordsman, and he would later prove to have a talent for the Obtenebration discipline. Unfortunately, Gregorio’s lack of imagination and bullying personality also made him something of a bore, and after his Embrace he was eventually relegated to a simple bodyguard position while Alfonzo sought out more stimulating company.

After languishing in his sire’s poor graces for decades, Gregorio followed his Alfonzo to Constantinople in AD 1185, and soon insinuated himself into the underworld of the Latin Quarter. He made himself quite useful over the following years and was quick to step into the vacuum in the wake of the murder of Juliano and Adrianna. As Flagello Principale (Chief Scourge), he led a large brute squad of ghouls and Latin Cainites of poor lineage in enforcing his sire’s will as Overlord of the Latin Quarter. He particularly seemed to enjoy visiting the lords of the other Italian sectors, where he reminded them of the homage that was due his sire and master. A frequent partner in his doings was his consanguineous brother, Marko D’Este, who tended to temper Gregorio’s hot temper with his far more cool disposition.

Gregorio had several conflicts of personality with the formative Concord, stemming from a mutual dislike of Sir Conrad de Monreal and Gunthar. The latter despised him as a bully and coward, while the former disliked Gregorio for similar reasons in addition to his being a representative of the corrupt Narsene Lasombra. For his part, Gregorio despised them in equal measure for succeeding in discovering the whereabouts of the Chosen of Calomena, a task in which he failed.

During the Narsene blood feast, Gregorio also managed to earn the reproach of Gabor the Bulgar, sire of Veceslav Basarab, for presuming to reach for his sword over an insult from the Bulgarian elder. Gabor swiftly cowed the ancilla, and the bishop told him to stand down as well. In response, Gregorio stalked over to the corner, closed his eyes and stood stock still and trembling for many minutes, seeming to show his true colours; either he was a coward in truth, or his command over his Beast was indifferent at best. The bully was quiet and withdrawn for the rest of the evening.

During the events of the Great Sack of 1204, Gregorio and Marko disappeared, and their ash-soiled clothes were later found among scores of other destroyed vampires in the secret gladiator pens of the Families, close by the Hippodrome. Rumour has it that Bishop Alfonzo sent them to perform a mass Embrace on the veteran slave warriors of the pits, in hopes of using their martial skill in tandem with their hatred of their masters among the Antonian, Michaelite, Magnus Orthodox, and Draconian Obertus Families. No one has ever officially claimed credit for the destruction of the two Narsene ancillae and all those fledgelings, but gossip eventually made its way around the Elysiums of the city that the elder Malachite was responsible for dispatching Gregorio and Marko. Their loss served to delay the power play of their sire by several years, but Alfonzo would eventually claim the princedom of the Queen of Cities in 1207. 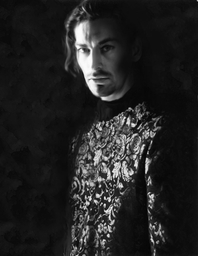