The Michaelite Muse of Performance, this Malkavian elder was one of the few Cainites to straddle the gulf between the Byzantine and Latin courts as his music, plays, and japes were appreciated by all. He committed suicide during the Great Sack of 1204.

Gregorius was frail and sickly, with bone-thin limbs and thinning grey hair that framed his head like a crown, giving him a defiant Roman appearance. He wore ostentatious clothing of the latest in Byzantine court fashions, but it was usually worn incorrectly and with clashing colours. There was a tinge of sadness in his blue eyes, but his smile tended to be fixed and full of cheer.

To have heard him tell the tale, Gregorius had existed since the dying gasps of the Western Roman Empire, although his tales of Rome were inconsistent, confusing, and patently false at times. He also variously claimed with a grin and a wink that he was Embraced on the Hill of Golgotha in the shadow of the Messiah’s cross, or at the burning of the Great Library of Alexandria. In his quiet moments, he admitted that his memories of his Embrace were fanciful and fleeting, so he tended to make up whatever tragic tale struck his fancy.

And such tales! Gregorius was a masterful performer. He was capable of writing and acting out the most ridiculous of comedies, or the most heart-wrenching of cathartic tragedies. A master of many media, he could also play numerous stringed instruments, although he much preferred the harp and the lute. His troupe of performers had a high turnover depending upon the requirements, and could number from his core of 3 ghouls to as many as 20 for important occasions. His core group had been with him for centuries, and it was said that they were so old that their pale auras were mistaken for those of vampires. Together they were a fixture in the Cainite Courts of the Queen of Cities since the end of the 7th century, when Gregorius arrived to replace Cassio, the moody Muse of Performance, who had fallen out with Michael and Petronius.

Gregorius was a particular favourite of the Patriarch, who was known to weep at the stark beauty, awful depths, and cathartic release of his performances. Alas, he was an erratic and nonchalant muse at best, but this was often ignored by the others because of the favour that he enjoyed for centuries. And besides, he was in good company by the middle of the 12th century, as Anthemios, Pakourianis and Paul were hardly models of reasonable men in the uncertain times surrounded the fall of the Comneni and the mismanagement of their Angeloi successors. Like the rest of the guilds, those under Gregorius’ sway fell prey to vice and madness, but it was often remarked that the latter was to be expected when you put their inspiration in the hands of a Malkavian.

Curiously, in spite of his place of high honour within the Michaelites, Gregorius was also welcome in the Latin Quarter. He and his players frequently performed at the blood feasts of Bishop Alfonzo of the Narsene Lasombra, where they exhibited a much more lecherous and free-wheeling bent than their dignified, sombre behaviour among the Byzantine families. The coterie was treated to this disparity first hand in AD 1196, when they saw Gregorius and his men perform at both the Antonian and Narsene blood feasts from one night to the next. The mercurial change in temperament and style was disturbing, to say the least.

For the most part, the Concord did their best to avoid Gregorius over the coming months. Likewise, when they returned to the Queen of Cities as part of the 4th Crusade years later, they had little interest in conversing with the Malkavian. Indeed, over the months after the 1st siege of 1203 and into the stressful months prior to the 2nd siege of 1204, only Iulia spoke with him at any length and then only because of the many Michaelite and Antonian councils that she attended.

After the sea walls fell and the city descended into chaos, the Concord was far too busy putting out fires both figurative and literal to give a fig for the whereabouts or well-being of the Mad Muse of Performance. On the 3rd night of the Great Sack, one of their number encountered him anyway, and he would later share knowledge of it with his companions. While seeking a way to circumvent the marauding soldiers of the crusade, the coterie made their way around the old acropolis towards the Great Palace, but they found that carrying the staked bodies of several of the Chosen of Calomena was inconvenient to their mission. As he had taken responsibility for the prisoners, Conrad de Monreal told the others to go on ahead while he sequestered the bodies.

Shortly thereafter the Lexor Brujah encountered a mad knight, once a champion of the crusade known as Cristiano da Palermo. Initially, Sir Conrad intended to slay the man for the crimes he had doubtless committed during the sack, but he was moved to spare the man instead, as Cristiano claimed that he had a vision of heaven burning while passing through the Kynegion Amphitheatre. As it was but a few moments detour from his road to rejoin the coterie, Conrad chose to investigate the place, and he left Cristiano to find his own fate in the chaos and fire of the city.

There Sir Conrad happened upon Gregorius in the centre of the theatre, his head bowed and his hands spread, as if acknowledging applause. He looked up at the Brujah’s approach, and Sir Conrad saw that the old muse was weeping, his features oddly triumphant and simultaneously melancholic. He asked then if the warrior had come to end his suffering, for his time was at an end. Indeed, the elder’s very old troupe of ghoul players appeared to be preparing chains and stakes, obviously intent on helping their master meet the Final Death with the dawn.

As if compelled to give a final confession, Gregorius then admitted to Sir Conrad that over the last five centuries he had carefully, patiently driven Michael mad. He had done so with the intensity of his extraordinary plays, interwoven with subtle uses of his Dementation when given solitary access to the Archangel during his bouts of torpor. Quietly, glacially, he reawakened the worst pretensions of divinity that the passionate methuselah had espoused before he became a Christian, and then led him into renewed and twisted fantasies of his own divine nature. He couldn’t even remember why, save that he had hated Michael for all his years, and that the Incognitus wished it so. With his typical flourish, Gregorius smiled through his bloody tears and said that he had broken the Archangel’s wings, and doomed the Dream to fall along with him.

He added then that the worst part was that Michael thought he was shortly to ascend to Heaven, believing that his divine and angelic nature would finally be free to rejoin God. Gregorius laughed bitterly then, and asked the disbelieving Sir Conrad to deliver judgement upon him, for no atonement could be made for his sins.

The Brujah is still choked with rage when he recounts that moment, but it really doesn’t matter. Whether he destroyed Gregorius in a fury, or allowed the elder’s own ghouls to facilitate his demise with the dawn, it is quite certain that the fallen muse did not see another night.

Embrace: Unknown for certain. From his own whimsical tales, anytime between the early 1st century and the middle of the 7th.

Lineage: Childe of Demtius (d?); further lineage is unknown, but Gregorius claimed to be of the 6th generation. 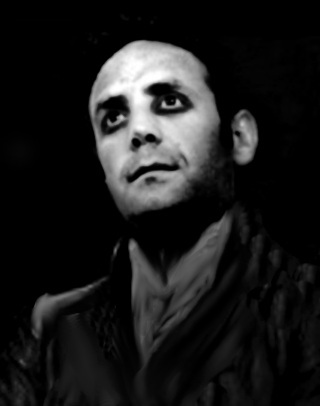