A former ghoul, Grozdan was secretly Embraced by Gabor the Bulgar in 1198, and given to Lars Sveengard to train. Abandoned by his sire in 1204, he now serves Prince Bela of Sophia in his brute squad.

A short, powerful-looking Bulgarian warrior draped in bear furs over a light chain hauberk. A deep scar bisects his right brow, slicing throw his clouded eye and continuing on to his cheek. He keeps his scalp shaved, but appears to take pleasure in his full, long beard, which is kept braided and sometimes tucked into his belt to keep it out of the way. He fights with a long hafted morningstar, and he keeps a long knife at his belt for a secondary weapon.

From his earliest association with his eventual sire, Gabor, Veceslav Basarab knew Grozdan to be the ghoul bodyguard of the Bulgarian Tzimisce exile. Over the course of his 50 year apprenticeship to his sire and the secular Obertus, Veceslav had many opportunities to understand the working relationship between his sire and their ghouls. However, by the time that Gabor had obtained the opportunity to Embrace him in AD 1153, Veceslav had already come to understand that of the old vampire’s servants, Grozdan was the knife while his older brother-ghoul Krasimir was the hammer. Certainly neither of the Bulgarian warriors had a gift for subtlety, but while Krasimir was a direct and implacable warrior, Grozdan had enough low-rat cunning to wait and stab his enemies in the back.

For the length of the difficult journey to Tihuta and the ensuing construction project, Gabor placed both Grozdan and Krasimir under the supervision of his progeny. While they were there ostensibly to protect Veceslav and assist in the effort, in truth their domitor had a secondary reason for sending both of his bodyguards on the mission. In short, he had decided to Embrace yet another vampire to add to the secret army that he wished to use against Basilio the Elder, the Lasombra who had usurped the throne of his city, Sophia, and he trusted the perceptive Veceslav to assess which of his guards was a better prospect.

After observing them for many months, the neonate reluctantly chose Grozdan over Krasimir for the simple reason that the younger ghoul was more flexible in his thinking, and more apt to make the adjustment. It was a difficult decision, as the Tzimisce had reason to be grateful to Krasimir for his bravery in protecting him in battle on several occasions throughout the journey.

Grozdan was Embraced by Gabor in the spring of AD 1198, just a few weeks after the project concluded. His delight at being chosen over Krasimir was palpable, and he was quick to lord his new authority over his former brother-ghoul. Naturally, the other Bulgarian was full of resentment, feeling cheated out of his rightful destiny. The Blood Oath prevented him from hating Gabor, and Veceslav’s inestimable charm insulated him somewhat, but Krasimir hated Grozdan from that night until his own death some years later.

For his part, Grozdan accompanied his sire and his consanguineous brother to Thessalonica, there to assist them in their work to help the Tzimisce ancilla Lars Sveengard take the throne of that city. They were successful in this endeavour, and Grozdan would be given over to Lars for further instruction while Veceslav returned to Transylvania and their sire made his way back to Constantinople. In the years to come, Grozdan would realise that Lars was in fact his other secret consanguineous brother, and that Gabor had bade the Varangian take Thessalonica so that he would have the arbitrary power to bring more warriors across to build their numbers. The Bulgarian was happy in that city, and pleased to learn all he could from Lars, particularly since the merry rogue was a far kinder teacher than their sire could ever have been.

Alas, his existence in Thessalonica could not last. As part of their mopping up campaigns after the fall of the Queen of Cities, the crusaders swiftly turned their attention to the second city of the broken empire. By the middle of Autumn of AD 1204, Marquis Boniface of Montferrat would conquer Thessalonica and declare himself king, and a good number of the more opportunistic Cainites of the now defunct 4th Cainite Crusade followed in his wake. Prince Lars and his followers failed to defend their domain, and it is thought that with the exception of Grozdan and Gunnald Ivarsøn, all of them went to the Final Death.

Months later, Gabor called in his soldiers to take Sophia. The elder recognised that his resources were depleted, but with the last vestiges of Byzantine Cainite control fleeing Bulgaria, he knew that Basilio the Elder would flee for his life and some other potent Cainite might claim his old domain. With the Blood Oath weakened but still intact, Grozdan rallied to the side of his sire immediately, bringing Gunnald with him. In addition to they and Veceslav others threw in with the rancorous old Bulgar, including Svenin the Tall, the mad wanderer Ulfe, Knez Iordan of Vladay, and a host of ghouls and mortals including Krasimir, Marius de Şimand, Sabbas of Constantinople, and Stiguld with a dozen of the Black Lions.

Gabor was correct. By the time they penetrated the depths of Sophia citadel using the secret ways he had had constructed centuries earlier, the courtyard of the fortification was already crowded with combatants and awash with their blood. Indeed, the Sixth Tradition strained to its very limit in that awful battle. Although he was far less effective than the older Cainites, Grozdan fought hard for his sire, confident that they would win the night. He took grievous wounds from a Gangrel, and then was laid low by the Tzimisce knez of Breznik, Teodor. By the time he recovered, he found himself in a circle of the vanquished, surrounded by the soldiers of Bela Rusenko. Svenin the Tall stood above him, and a number of the Black Lions stood there also, but there was no sign of the others other than Iordan, who had obviously turned cloak in the battle.

Bela declared himself prince then, and in a moment of extraordinary magnanimity he offered the vanquished their lives provided they offer something in return. Most importantly, the surviving supporters of the vanquished Marin of Pernik and Ivaylo were told to bend the knee and swear, take an oath of blood, and accept a life boon. In return for their service to the new prince, he would support their suits on their dead liege’s demesnes. Having no domain to fight for, and the capacity to do untold damage before they would succeed in destroying him, Svenin saved face and negotiated a major boon for the survival of he and his warriors. For Grozdan, though, there was little but to offer his service under a Blood Oath and a life boon. This he did, for Grozdan was never too proud to die uselessly.

Soon enough, Svenin would share how the rest of the melee unfolded. In short, once the tide turned against Gabor the Bulgar and his people, the elder ignominiously fled, using Ascendancy of the Sanguine Humour to abandon his followers and allies. In shock, Veceslav, Ulfe, Gunnald, Marius, Sabbas and the others managed to beat a fighting retreat, but the viking would not quit the field and the Black Lions followed his lead. Among the dead, he noted with a surprising pang of sorrow was Krasimir.

Grozdan’s world crumbled at the knowledge that his sire and master of more than 70 years had so readily cast him aside, and he turned his heart towards working with Svenin and the Black Lions in service to Prince Bela. He would learn much from massive northman over the following 7 years, fighting alongside he and the other vassals of his new liege to expand the shield of domains around Sophia. When the Gangrel took his leave it was with the young Tzimisce’s firm professions of friendship and admiration.

For his own part, he continues to reside in Sophia, where he still works to pay off his debt to Prince Bela. He is neither warden nor scourge, but exists in a support role, backing up the officers of the court with his trusty morningstar and his unique blend of brutality and rat-bastard cunning. It is likely that Grozdan will continue to do so for many, many years but he is oddly content, knowing that the liberal court and light touch of Bela Rusenko will allow him a lifetime of security and growth in which to find his feet among the Children of Caine.

Embrace: AD 1198, although his first thrall as a ghoul in 1134 means he is considerably older.

Lineage: Grozdan is of the 7th generation. He is the childe of Gabor, childe of Demenaus (d), childe of Ionache (d?), childe of the Eldest. Owing to the failures of his sire, it is worth noting that among the Tzimisce his bloodline is considered to be somewhat ignoble. When compelled to introduce himself in the traditional Tzimisce forms, he calls himself Grozdan Gaborin sin Ionachev. 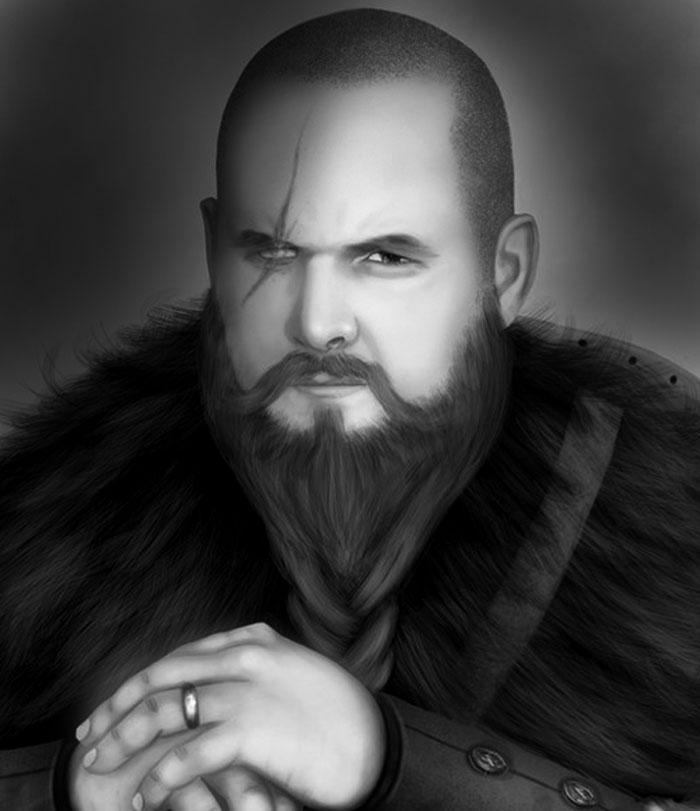