An incorrigible, self-serving pirate, this Tzimisce also has a good head for numbers and strategy. He served his sire as seneschal of Thessalonica for several years, and Veceslav Basarab as warden of Tihuta for a decade before leaving to seek his fortune.

A grizzled, heavy-set northman sporting a full, braided beard. His eyes are grey, flinty and without warmth. The warrior wears a mail hauberk, an antiquated viking helmet, and the pelts of wolves and a bear. He keeps several knives about his person, as well as an arming sword and a handaxe.

A consanguineous relative of Veceslav Basarab, this northman hails from the distant island of Gotland, off the coast of the Kingdom of Sweden. Gunnald sometimes says that he misses his home, but he also allows that his homeland only exists in his memories. He believes that the old ways are dead on Gotland, for he has heard that the island is full of Christians now, more interested in trade than war. In truth, even before he left the island in the 1120’s Gotland was already making the transition to a trade hub, and more than half of its people even then had thrown out the old gods in favour of the new. He was not among them. He had no interest in Christianity, but good silver was to be had fighting the wars of the emperor of Miklagard. Like many of his countrymen, Gunnald journeyed to the East early in the 12th century, eager to join the Varangian Guard of Constantinople, earn his fortune and wet his blade with the blood of the empire’s enemies.

He served in that capacity for nearly 10 years under the command of Lars Sveengard, a towering rogue who shared his devil-may-care proclivities. By that time, Lars was already a vampire of the Tzimisce clan, and although he professed no knowledge of the one who sired him (a carefully constructed lie, for Gabor the Bulgar had secretly Embraced him without permission), he was making a name for himself as a Varangian in the employ of the legendary Antonian general, Belisarius. Lars had no great desire for material wealth, but he did wish to build a coterie around himself, so the payment he asked for his service to the Ventrue was the Right of Progeny, under the aegis of Belisarius himself. As this strengthened his own position, the ancient general had no reservations in granted the request of the mercenary. Over the coming years, Gunnald would become Sveengard’s 1st ghoul, and the 2nd man he brought across into undeath.

Gunnald became a vampire in AD 1138, in the midst of the Emperor John Comnenus’ Cilician and Syrian campaigns. Lars established a coterie within the Varangian Guard, then known as the Ravens of Belisarius, and together with Gunnald and his two consanguineous brothers, Folkmar and Haklang, they would soon gain a reputation as a free-wheeling and blood-thirsty but eminently reliable band. At its height, during the last years of Manuel’s Balkan campaigns, Gunnald had more than 10 shield-brothers, including Tzimisce of other bloodlines as well Ventrue, Gangrel, and Brujah. Their clans were less important than their courage and their loyalty and together, united by oaths of brotherhood and blood, they were powerful tools for the Antonian Military Prefect. Within the coterie, Gunnald became something of a seneschal, discovering that he had a flair for managing the pay for their band.

Alas, all good things come to an end. Eventually, Belisarius lost ground to Caius and Nicepherus, both of whom were resentful for what they perceived as the undue power of the old general. By AD 1183, the Last Roman had retreated from prominence and his Ravens became unsure of their place. The Comneni faltered and then broke, to be replaced by the ineffectual Angeli dynasty. Soon, there was little enough silver to go around as the armies were downsized and mercenaries stood down. Lars took the reversal in his stride, taking the remnants of the battled-thinned band and offering their swords to the resurgent Bulgarian Empire under the Asen brothers.

They fought and lived well in this capacity for many years, before the continuing destabilsation of the empire stirred Sveengard’s ambitions. The Cainite political firmament of the city of Thessalonica had stood in a state of flux since the Norman capture and sack of that city in 1185. Unknown to the rest of the Ravens, he was secretly egged on in this decision by his sire, Gabor, who desired his progeny to find a position of power to assist him in retaking his old city of Sophia.

In 1199, Gabor, Veceslav, and Grozdan journeyed to Thessalonica in order to assist the Ravens and, after vicious fighting, they defeated a number of rival factions over the next 3 months. Immediately thereafter, Lars declared himself prince. At that time, Gabor and Lars maintained the pretense of being mere allies, but the admiration that the new prince displayed for the exiled one left little doubt in the minds of the Ravens or that of Veceslav that they were sire and childe. They remained several months longer before departing to their own domains, but the fledgeling Grozdan was left behind to learn from Prince Sveengard and the others, who thereafter styled themselves as the Ravens of Thessalonica.

The new regime based themselves out of the Crow’s Nest, a ramshackle tavern and inn overlooking the dock-front of the city. Lars desired the respect of a prince, but he had little interest in the details. These he left to Gunnald, who would be appointed seneschal of the newly conquered city. The Gotlander did not want to disappoint, and he did his best to fulfill his sire’s expectations. However, the best he could really manage was a loose delineation of domain borders for the scores of Cainites who dwelt in the city, as well as a monthly tribute of silver for the right to remain, and lastly the final right of arbitration in any disputes that arose. In truth Lars was content with that arrangement, for it allowed him his station and also freed up his time for fighting, gambling, and wenching.

Years later, the 4th Crusade broke Constantinople, and throughout 1204 the barons of the Bitter Pilgrimage carved up the remnants of the empire between them. Thessalonica was no different. Marquis Boniface of Montferrat took the city, and made it the seat of his new kingdom. With him came a small army of Cainite Crusaders eager to take advantage of the disruption. Led by the prominent Ventrue captains Vitalis d’Asti and Thibauld de Bayeux, who were allies of convenience due to their failure to find domain in the wake of the Great Sack, the Latin vampires displayed a remarkable gift for both scouting and skullduggery. The havens of the most prominent Cainites of Thessalonica, including the Ravens, had been discerned ahead of time, and many of those buildings were fired by saboteurs in the hours after dawn, just as the enemy army fell upon the city.

The Ravens lost some of their best in the loss of the Crow’s Nest, and while they fought hard and well to keep their territory, they were unequal to the task of holding off the Ventrue captains and their many followers. As far they are aware, Gunnald and Grozdan were the only confirmed survivors of the coup. They fled to Gabor, who welcomed them with grim fatalism, for by then he was committed to his own attack on Sophia.

Gunnald fought with skill and courage throughout the battle for Sophia in December of 1204. Gabor’s people chose their moment to strike at the engaged bands of Ivaylo of Vratitsa and Marin, whose ranks were already winnowed in combat. Ultimately, however, the strength of their hastily assembled coterie was unable to prevail over the numbers of Bela Rusenko and the treachery of Iordan. The Gotlander fled the castle with Veceslav after Gabor’s own cowardly abandonment of the field. Unfortunately, the fallen Grozdan was left behind.

Now at loose ends, with no surviving shield-brothers, Gunnald accepted the hospitality of his consanguineous uncle and travelled with him to Tihuta. Veceslav was nominal lord of a large tract of the valley, but the handful of villages that dotted the length hardly required his skills at management. Instead, the knez asked him to be his warden and patrol the vastness in company with the Pecheneg neonate Jals. In return he would be given several of the villages for his own maintenance, and he would have the benefit of Veceslav’s wealth of experience and enviable knowledge of the powers of the Blood.

He served as warden of Tihuta for 11 years, although he had to return to his grave near Manistra in 1208 and 1213 to renew his supply of the source of his strength. On the 2nd trip, he returned with rumours that other Ravens had escaped the fighting with the Latins, although if this was the case, their trail had long since gone cold.

Veceslav was an atypical knez, for he required no blood oaths or indeed, oaths of any other sort. Instead, he seemed to simply to value the Gotlander’s strength and military experience, and he appeared to like having others of his bloodline around him. In 1215, Gunnald asked his blood-uncle to release him, as he had conceived of a desire to return to Thessalonica and investigate whether the rumours were true. Although he couldn’t explain it, Gunnald felt that Sveengard had not suffered the Final Death, and he wanted to find out for sure. With reservations, Veceslav granted his wish, asking only that he return whether he found his sire or not, for if Lars does indeed survive, he too would be welcome to recover his strength at Tihuta.

Gunnald departed Tihuta Castle in June of 1215, and no word had arrived of his movements before Veceslav was forced to flee before the advance of Vladimir Rustovitch and his armies in February of 1217.

Embrace: AD 1138, although he was a ghoul for a handful of years beforehand.

Lineage: Gunnald is of the 8th generation. He is the childe of Lars Sveengard. Lars’ own sire is a mystery to all save members of his own bloodline, as he was the childe of Gabor the Bulgar, childe of Demenaus, childe of the Dracon, childe of the Eldest. Owing to the failures of his grandsire, it is worth noting that among the Tzimisce his bloodline is considered to be somewhat ignoble, so Gunnald is content to keep them guessing as to his true lineage so he can avoid the worst of Gabor’s reputation. 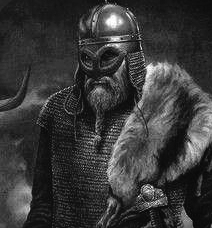