The Sheriff of Hermannstadt; a bestial Nosferatu that stands as Prince Marusca's heir apparent.

A horrifically deformed monster dressed in rags that might have once been the garb of a tradesman, or perhaps a town guard. His head is ungainly and elongated, tapering to an egg-like point above his right ear. What little of his face that isn’t scarred by tooth and claw is covered in unsightly pustules, while his mouth contains two large, snaggled fangs sitting side-by-side. His eyes are a bright, sky blue. He is unarmed.

Gustavus is one of Marusca’s most powerful and noted childer. Since the very founding of the Saxon settlement, he has guarded Hermannstadt from all interlopers, but in recent decades he was particularly responsible for defending his sire’s demesne against the incursions and depredations of Marelle, a terrifying Tzimisce known as the Sculptor of Wolves. His success was mixed in this matter, for the war against the Hell Hounds was all but lost before the intervention of the Concord in AD 1214. In large part this was due to the near-destruction of his consanguineous brother, Nicu, in 1209. The two powerful members of the Brood had coordinated internal and external security for many years, sharing a loyal pack of wolves that was gradually winnowed by the greater Animalism skills of the enemy. Gustavus also appears to have a vast number of allies and contacts within the margrave’s city guard, granting him considerable influence in the military security of Hermannstadt. Indeed, he has said that he was one of the original night watchmen of the fledgeling settlement, Embraced by Marusca soon after the city was founded.

In AD 1197, he intercepted the Concord nearly eight miles outside of Hermannstadt, and approved of their efforts to contact and introduce themselves properly. Gustavus and his massive wolf pack escorted them to the city, and although he proved himself to be a terse travelling companion, he did speak of the troubles besetting Marusca’s domain. While he was neutral regarding their overtures of aid, commenting that the Brood was up to the task of protecting the margraviate, he indicated that Marusca might be willing to accept their support in the future “if things didn’t work out.”

Many years later, with the war against the Sculptor of Wolves having taken a disastrous turn, the Concord elected to approach the Brood once more. The Nosferatu agreed to accept their assistance in throwing down the greater numbers of the Hell Hounds, but refused to consider the notion of Svenin the Tall stepping forward as a new prince for the beleaguered city, even in a false sense. The Gangrel put forward the notion, not with merit, that if Marusca and Ruxandra were thought to be gone, the Siebenburgen could get back to the business of answering threats in unison. In no uncertain terms, the prince of Hermannstadt stated that she had birthed the city, that it was the home of the Brood, and if she fell in the coming conflict, Gustavus and no other would step forward as her replacement. She, and her childer, had held the city for decades against the scorn and envy of the Ventrue and the Tzimisce; they were proud of their accomplishment, and were prepared to go to the Final Death rather than see that change, even under convenient, false pretenses.

During the Battle of the Black Cave, Gustavus and Levente stayed close to Marusca, making use of their impressive command of the Protean discipline to circle above the melee. When Marelle finally appeared in company with Ghenadie and Flavia of the Cleft Peak, the three Nosferatu dove directly towards them to end the war once and for all. While Levente dealt with Flavia and her lackey, Rozalia, and Gustavus contended with Ghenadie, Marusca and Marelle finally met face to face and fought tooth and claw.

In his own fight, the sheriff of Hermannstadt came off second-best after a flurried exchange of blows. Mauled by the greater skill of his opponent, Gustavus kept his feet long enough to see his sire best the Sculptor of Wolves. The shock of her defeat left Ghenadie open to a cheap bite from the sheriff, and the weakened Tzimisce was then finished off with a treacherous backstab from his own kinsman, Klaus.

After the victory, Gustavus once more joined his sire, taking wing to summon bats and other pests to frustrate the approaching pack of werewolves that sought to finish off the weakened Cainites. They would do this again and again as the Concord and the Brood fled at all speed for the walled village of Freck.

In the weeks to come, an alliance was announced between Jürgen the Swordbearer and Prince Marusca. A number of the Brood, including Nicu, would journey to the Burzenland to assist the Order of the Black Cross. For his part, the Nosferatu sheriff resumed his duties with relish, looking forward to seeing the city return to its former glory.

Lineage: Childe of Marusca, Childe of Zelios, Childe of Hannibal; of the lineage of the Hag, also known as Baba Yaga. As Marusca is known to claim the 8th generation, Gustavus must be of the 9th. 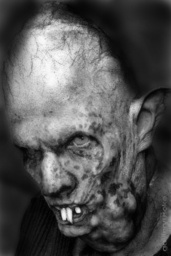