The seneschal of Heinrich the Hound; a stiff-necked, sometimes condescending fellow who nontheless serves Ulirich very capably as his estate manager.

A thin, stern man in his fifties, possessed of angular features and keen brown eyes. Going to grey, he has a prominent moustache, a carefully trimmed beard and a slightly receding hairline. He keeps a dagger at his belt. The coat-of arms of Heinrich the Hound is worn proudly on the breast of both Heironymous’ sky blue robe and also on his gambeson, when the seneschal is on his rounds.

Heironymous is a very quiet, very proper man not at all given to waxing poetic regarding his origins, adventures, and ambitions. His manner and bearing is aristocratic and somewhat vain, but he makes no pretensions of having ever been anything more than a good servant to a great lord. He makes it clear to those who ask that he has served Ulrich (or Heinrich in his current persona) for many years, and that he enjoys the honour of having been the first man that that noble scion of the Ventrue gifted with the Blood. It is obvious that he is deeply proud of this fact, although it is quite rare for his sometimes excessive self-esteem to get in the way of his logical mind or his common sense. For Heironymous is nothing if not sensible, and indeed despite his considerable skill with regards to organisation and the management of feudal estates, it is this trait that makes him most useful to his Cainite domitor.

He is something of an autocrat in his methods, ordering others (including his fellow ghouls Theodor, Ortrun and Dolph) about as a matter of course. Following their lead, the young men who have taken employment with Heinrich the Hound have learned to just let the seneschal have his way. Not only does it save them the inevitable carping (for Heironymous seems to feel that, aside from his domitor, he is the only sane participant in any given conversation) but it also tends to work out for the best, as the seneschal happens to be very, very good at his job. Indeed, the only time his common sense seems to be over-ruled by his conceit appears to be when he meets someone else who is very much like himself. This was evidenced upon his first meeting with Gottlieb Ritterbrüder von Koblenz, quartermaster for Kronstadt for the Order of the Black Cross. The cynical, critical attitude of the quartermaster and the pompous, authoritarian mien of the seneschal immediately caused friction, and it was only the intercession of their Cainite masters that brought their disagreements to a close before any lasting ill-feeling occurred.

Despite his arrogance and his prickly nature, Heironymous genuinely seems to regard his fellow retainers as true friends. Though he smiles but rarely, and takes part in their japes perhaps once in a blue moon, he offers them the occasional good natured compliment. In return, they make light of his attempts to order them around, yet they suffer no one else to do so. He also takes great enjoyment in the company of his hounds Zeus and Apollo. Quite out of character for the otherwise painfully proper seneschal, he insists on carrying on inane conversations with his animal companions. Before heading to the Holy Land on crusade, he also talked fondly to his pigeons, which he kept in a hutch atop the wooden keep that served as the castle of Etteldorf. Somewhat oddly for such an autocratic disciplinarian, he has also been known to offer small kindnesses and gifts to the downtrodden, especially those who have run afoul of people like himself. 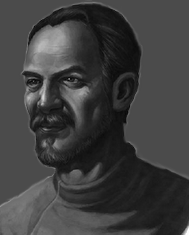