A member of an extended family of ghouls and herd that serve the Cappadocian elder Dietrich von Steyer. He was Maude's only attempt at making a ghoul, and was slain shortly after. She later found him in the Shadowlands and they renewed their friendship.

A pale young man of German heritage dressed in the garb of a merchant or perhaps a reasonably well-heeled edler’s son. He has short blonde hair, furtive dark brown eyes, a broad, gentle face and a healthy build. When he turns his head, the back is observed to be a bloody ruin.

The Chriegler family has faithfully served Dietrich von Steyer for generations, and have become quite wealthy and respected in Viennese society under the elder’s patronage. Each generation, one member of the family is chosen, carefully groomed and selected to receive the Blood while the rest serve meekly in whatever capacity that their Cappadocian patron sees fit. Generally this means that they serve as the herd of Dietrich, Maude, and Crispin. Adolf was the first to receive the Blood (in 1007 CE, now deceased), followed by Hermann (1031 CE, deceased also), Rolf (1060 CE), Godwine (1082 CE), Freiderich (1110 CE), Lukas (1138 CE), Heinrich (1170 CE), Hermann (1197, deceased), Adolf (1205), and Ludwig (1217).

Hermann fervently hoped that he would be chosen in his generation, although he also hoped that his brother Adolf would earn the honour as well. The fact that he was the first to serve Maude exclusively fueled this hope, and Hermann worked tirelessly to prove himself worthy. He would accompany her to Buda-Pest in 1197, watching with great fascination her inclusion into the formative coterie that would become the Concord of Ashes. Consequently, he journeyed to Transylvania among the caravan of Cainites, ghouls, and herd to build a tower in Tihuta Pass. Friendly enough, if not a little shy, Hermann developed great admiration for the dignified ghoul known as Rossos, and he also came to enjoy the company of Marius, Gabriel, and Sherazhina. He endlessly strove to prove his value to Maude and constantly urged her to consider him for the position of her ghoul.

After careful deliberation and with serious reservations, she finally made Hermann her thrall at Klausenburg. Sadly, Mitru the Hunter loosed an arrow into the back of his head just several nights later.

Stricken by grief, the Cappadocian necromancer tried to find his spirit in the Shadowlands for years, and eventually discovered that Hermann did indeed continue his existence as a wraith in Vienna. Like many ghosts, Hermann appeared at first to be in a confused state, unaware that he had passed on. He hovered around the family compound, and sometimes tried to speak his brother Rolf, and with Elsie, the girl that he had hoped to marry. He also tried to play with Zulf, his mastiff. It was the dog that convinced Dietrich that something was amiss, and using the rudiments of nirgimancy that he had learned from his progeny, the old scholar managed to contact Hermann and draw him into a realisation of his state. At first horrified by his new existence, Hermann took a measure of comfort in knowing that he could still serve in a way that no one else could. He was also pleased to know that Rolf had been chosen to receive the gift of the Blood, and was now Dietrich’s latest ghoul.

In 1211, Hermann would ask Dietrich once again to allow him to go to Maude, and while reluctant to let such a valuable tool go, the elder agreed. His vampire friend was full of regret and sadness for leading him to his fate, but overjoyed that his irrepressible cheerfulness had survived his transition into death. She took him on once again, and Hermann settled into place as one of the wraiths of the necropolis of Apulon, a settlement of the Risen several miles away from the city of Weißenburg. His death marks clearly established him as a candidate for the Grim Legion, and they accepted his explanation that he was able to remove his own caul rather than have it reaped by another.

Maude encouraged him to learn as many Arcanoi as possible, with an eye towards staying safe and hidden, but Hermann had no desire to be of little use. While he took on board her desire for him to learn the arts of staying hidden from the sight of those who would wish him harm, her old retainer was now a Grim Legionary, and he had no desire to avoid danger altogether. Instead, he solemnly promised the nagging old crone that he would not be foolhardy, but neither would he be useless. In 1214 he would accompany Marius, now a vampire of the Lasombra clan, to the city of Kronstadt, and secretly helped his old friend in the war against the Gangrel warlord, Kordönül, although the Ashen Band in general became aware of him due to the reality warping shadows within the pyramid mountain of Buzău.

In 1217, he would again venture forth from Apulon, this time in company with Dietrich, for whom he still quietly retains loyalty despite his obligations to his legion and the Dark Kingdom of Iron. As with Buzău and the Cuman War, Hermann works from across the Shroud, trying to navigate the pitfalls of being useful and staying safe. For the most part, Dietrich also has no desire for him to endanger himself needlessly, so he asked only that Hermann reconnoiter from time to time, and otherwise to stay close and warn him of impending problems across the Shroud. In this way, it was Hermann who led the Concord and Dietrich to the ruined village of Al-Jazet, and he was able also to assist the ghost of Bertrand in explaining what had happened to Kyros of Antioch. 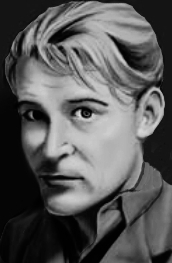