A petty, vengeful neonate of the Tremere clan. Many years ago, Maude Khlesl publicly humiliated Hette, and the Warlock swore enmity at the crone.

A pale, pretty Austrian woman, dressed in the wealthy trappings of the high-born and moneyed elite. Her long blonde hair terminates in lustrous curls and her hazel eyes sparkle with intelligence. She might be considered even more beautiful but for the arrogant turn of her head and the dismissive curl of her lip.

Hette was born among the elite of the Duchy of Austria, and she grew up enjoying all of the privileges of wealth and position. Her father, Gerhard, had long been an ally of the ruling Babenberg family, and the very least that Hette could expect from life was an advantageous marriage and a prestigious position. However, that was never going to be enough…

She always knew that she was special, even among her peers. Sometimes strange things happened around her; things just seemed to go Hette’s way unexpectedly (at least as far as others were concerned). Gerhard realised her brilliance early on, and saw that she was instructed in letters and the quadrivia in addition to her formal lady’s education. A scholarly advisor to her father (as well as Duke Leopold V) known as Filaerus deemed her to be special indeed and at the tender age of 14, she was secretly inducted into the ranks of the magi of House Tremere. For the next five years, her education was split between her father’s house and an imposing, stout lodge a few miles north of Vienna. She excelled at magick too, just like she excelled at everything else. Like most of the magi at the Chantry, however, she was ignorant of the fact that Regent Filaerus and some of his most important cohorts were already vampires, and that they had plans to bring their brothers and sisters into the fold.

Hette caught the eye of Lotharius, Tremere prince of Vienna, in the summer of AD 1195, and was brought into the clan soon after at the orders of Etrius himself. She is one of several progeny that Prince Lotharius has created since he took the princedom, but is the only one that has been created for reasons other than improving his strategic hold on the city. Unsurprisingly, under Lotharius’ personal instruction Hette quickly showed herself an apt student of Thaumaturgy, and she made the rank of Initiate of the Fifth Circle in near record time.

It was thought that she would make a good recruit due to her ambition and belief in her own predestined greatness. They were right on both accounts. Unfortunately, the Embrace has done nothing to curtail her overweening sense of pride. Indeed, Hette’ self-confidence has become extremely annoying, as she has become given to making grand, sweeping statements without the benefit of the maturity or experience to back them up. Naturally, this made her easy prey for the waspish Sister Maude Khlesl. In the autumn of AD 1197, the Cappadocian crone roundly criticised and humiliated Hette with her barbed wit during a court gathering in honour of a visit from Etrius himself.

The whole court laughed. Even Lotharius and Etrius chuckled, and while Maude was soon ‘moved on’ for the effrontery of humiliating the prince’s prized childe, Hette has sworn vengeance for the insult. On everyone apparently. Rumour has it that she fell out of favour with Lotharius by the turn of the 13th century, and she quickly sought reassignment to Ceoris in Transylvania. It did not escape the court wits of Vienna that Maude herself was sent in that direction just a year or two before.

She would turn up in Kronstadt in January of 1203. Passing through the city to pay their respects to the sire of their recently fallen companion Prince Bernhard, the Concord became embroiled in a number of events. One of them was the appearance of Johnathon of Flanders, a Tremere neonate who had smuggled himself into the city alongside one Hesintrada, a fellow magus of House and Clan. The Concord browbeat a good deal of information out of the knight, including the vital intelligence that one of their clan, Eridanus, had secretly dwelt in the city for decades, using it as a supply way-point for the Grand Chantry at Ceoris, which lay “only some seventy miles away.” Eridanus dwelt within the formidable Guildhall of the Stonemasons, and Johnathon and Hesintrada were his guests.

The Concord then allowed Sir Johnathon to go, provided he took them to the chantry so that they might speak with Eridanus and come to terms with him regarding the presence of the Tremere in the city. Once they were admitted to the guildhall, Hesintrada was revealed to be Hette von Borcke, who had taken the grandiose name as one worthy of a true magus. She might have attacked Maude, if given the chance, but the great anger of Eridanus at her and Johnathon’s ineptitude and the subsequent revelation of his secret chantry stayed her hand. Indeed, Hesintrada seemed quite afraid of the genial old astronomer, and she barely uttered a peep during the negotiation. In truth, her hard stare at her rival conveyed all the hate that she clearly felt.

Hette would cross paths with the Concord again, when the Tremere coterie known as the Sodalicium of Swords joined the Fourth Crusade in September of that same year. Although they were late arrivals, the seven Warlocks quickly proved to be a powerful tipping point in the balance of power between Guy of Provence and Felix of Vaucluse, for their support for the latter threw the leadership of the Cainite pilgrimage into serious contention. Certainly not a crusader of any stripe, Hette seemed to be present only for the possibility that she might get to finally satisfy her fantasy of destroying Maude, who for her part was bemused at best and disgusted at worst with the young vampire’s fanatical hatred.

Although she is no warrior, Hette proved to be quite dangerous in the events surrounding the Great Sack of Constantinople. From afar, several members of the Concord witnessed that her command of Thaumaturgy was profound for one so young, as her mastery of Creo Ignem allowed her to hurl balls of fire that engulfed entire buildings, as she aptly demonstrated when she, Augustin, and Gilbert assisted the Serene Brotherhood in their attack on the Monastery of St. John Studius. It was obvious at the time that Hette seemed to delight in the destruction that she was causing, and any one of them would have gladly destroyed her if given the chance.

She has not been seen in the many years since, but it is thought that Hette was a guest of mighty Abetorius Maior for a time, and then she returned to Ceoris, where she yet dwells. 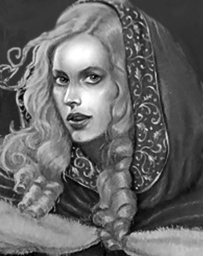