A koldun adept and priest of the pagan god Jarilo, this ancilla wanders the Voivodate offering his services to the powers that be and quietly promoting the old faith.

A very beautiful young man with a sharp chin and high cheek bones. Eyes of such a lively brown as to appear a fiery auburn gaze about him with gentle amusement, and a cascade of long, thick red-gold hair flows loosely across his shoulders. He dresses sensibly for the road, but the quality of the cloth and thread is fine. He is armed only with a simple knife.

Ilias ‘the Beautiful’ explodes many of the myths of the Tzimisce as a cold, unfeeling, monstrous clan. He laughs freely and with genuine pleasure, enjoys the company of mortals whom he appears to genuinely value, and displays no calculating behaviour or greed for Domain whatsoever. He seeks no advantage over his fellow Cainites beyond the hospitality of a good host, and the willingness of those whom he aids to foster the survival and regrowth of the ‘old faith’ wherever they reside. A priest of the pagan god Jarilo, he takes his duties as a minister to the kine quite seriously, and like many of his brothers and sisters among the traditional kolduns, he has melded his religious devotion and pursuit of sorcery into a harmonious whole.

An inveterate traveller, Ilias Cel Frumos appeared in the court of the Prince of Bistritz while the coterie was also enjoying Radu’s hospitality. He introduced himself as the childe of Dorinta (which impressed both Radu and Veceslav), and a koldunic adept willing to place his skills at Radu’s service in exchange for hospitality. He seemed to be pleased to make the acquaintance of the coterie, but his attention was quickly diverted to Myca Vykos. Ilias’ clear interest in and intentions towards the Obertus ambassador seemed to fluster the normally unflappable Vykos, who could not resist displaying his own attraction to the koldun.

Over the coming weeks, Ilias found every opportunity to place himself in Myca’s way, and swiftly seemed to win the older Tzimisce over. By the time of the monk’s inspection of the Tihuta construction project, Vykos and Ilias where actively travelling together. The former was conducting diplomatic overtures to the voivodes of the area, while the latter was seeking further instruction from a koldunic master (Maria Belladodia) reputed to dwell nearby.

Ilias Cel Frumos has provided a number of useful services to the coterie. He cleansed both Iulia and Veceslav from a ‘taint’ that they had carried since the Kupalan cult’s attack. Months later, when Lady Perlina’s reading of the tablets at Tihuta pass when awry, he also cleansed the entire tower site for the coterie, thus removing a similar taint with a ritual propitiation to Kupala. Finally, Ilias initiated Veceslav Basarab into the koldunic mysteries and the priesthood of Jarilo. For all of these services, he asked only that they continue to shelter and propagate the old faith. 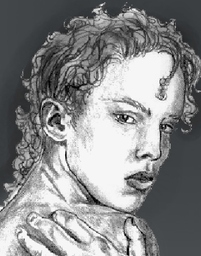