This ancilla, once of the Baron's Gangrel, can often be found at the Saut Aswad or the Silk Road, where he hires himself out as a guide to the city, a procurer of vessels, a fence, and a finder of lost items or people.

A typical Byzantine commoner sporting a full beard, short, wavy brown hair and gleaming brown eyes. He seems like a happy sort for an amiable grin seems to be plastered to his face, which also bears a faint scar on his left cheek. A dagger is thrust through his belt, and he wears the clothes of a tradesman or dock worker.

John, or Ioannes to his fellow Romaioi, is a typical low-born man of Constantinople, unremarkable despite the scars that mar his face. In life he was a labourer, a dock worker, a pimp, and a thief as the occasion and opportunity presented itself. One night, while looking for some cheap sport on the docks of Kontoskalion, he was attacked and Embraced by a Gangrel that had chosen to make prostitution her manner of feeding. Voleta frenzied in the act, and impulsively Embraced the dying Ioannes out of pity. Upon coming to awareness, he found himself staked and facing the judgement of the Quaesitor Tribunal alongside his sire. A member in good standing of the Baron’s Gangrel, she had broken the Codex of Legacies by disrupting the Legacies of Shadows and Progeny. Voleta admitted her guilt, stated that she was tired of her existence, and ready to face the dawn. She asked only for leniency for her childe, who was innocent of wrongdoing. The tribunal granted her wish, and Voleta was executed with the break of the following day. Ioannes was spared, and turned over to Baron Feroux.

The thief was made a member of the Baron’s Gangrel, but he always struggled to live up to the ideals of his lord. A deeply flawed man, fond of feeding to excess on alcohol as well as hashish-laced vitae, as well as the odd bit of theft and extortion, he was often looked down upon as wayward by the older and more senior knights. However, his loyalty was never in question for he was always ready with his dagger or his claws whenever the family called. Only his grandsire Urbien actively disliked him, for he treasured Voleta above all of his other progeny and found Ioannes an inadequate replacement for her heart, skill, and ability.

Throughout the course of the four decades he served the baron, Ioannes frequented the inns, pilgrim hostels, taverns and alehouses on the border of the Latin Quarter, and he had many agents throughout it as well. Then as now, he generally made a habit of stopping in at the Saut Aswad and the Silk Road every evening, trolling for gossip or new arrivals. He was considered to be less antagonistic and more approachable than most of the Baron’s Gangrel, and as such he was often sought out for introductions by those Latins who hoped to gain temporary access to the Greek districts. Ioannes was known to enjoy doing so, for it gained him a series of minor boons that he hoarded jealously against “a rainy night.”

When the Fourth Crusade broke into the city in April of 1204, Ioannes answered his baron’s call along with the rest of his brothers and sisters. They gathered at the Citadel of Petrion to make their plans for beating the enemy from the city, only to find that somehow the forces of Duke Guy had found them instead. The Baron’s Gangrel fought hard and well, but they were beaten by the enemy. Like many others, Ioannes fled when he saw Feroux lose himself to a fox frenzy. He was also among those who regrouped the next night and witnessed Justinian challenge and defeat their lord.

The Baron’s Gangrel ended as a family that very night.

For his part, Ioannes was pragmatic about the dissolution, figuring that his rainy night had finally arrived. Unlike many of his former brothers and sisters, Ioannes remained in Constantinople in the wake of the Great Sack. Over the many years since, he has thrived. Building on the many small boons he garnered in his former role, he reinvented himself as a fence, spy, investigator, pimp, and procurer. The sneaky Gangrel remains near Kontoscalion, the harbour that has always been his home, and he curries favour with the prince and other influential Cainites to keep it that way.

Lineage: Childe of Voleta (d), childe of Urbien, childe of Agatone (d); further lineage is unknown to him, but his grandsire has claimed that the Greek bloodline is descended from an ancient who called herself Artemis after the goddess of the hunt. Others have claimed Autonoë, a legendary figure in Theban mythology, is the mother of the bloodline. Ioannes cares little, for as a Gangrel of the 11th generation, his blood is too thin to care about illustrious ancestors. 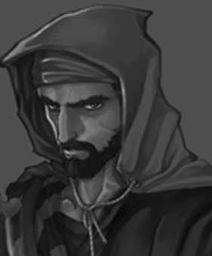