A legendary Ravnos elder of the Phralmulo family, this merry trickster also has a reputation as being capable of great cruelty when he deems it necessary.

A short, pot-bellied gypsy in his middle years. Not quite handsome, he appears to be a little vain, judging by the pride that he seems to take in his appearance. He keeps his black hair, salted by a few strands of silver, short and slicked back out of his face, and his goatee and moustache are immaculately kept. His sleeveless robe of linen, cut to keep his legs free, a silken white tunic, and his calfskin boots are all of excellent quality. A fine dagger, bejewelled with rubies, is thrust through his crimson sash.

This Ravnos elder hails from one of the eastern bloodlines of the clan that appear to guide the destiny of the Romani people, known as gypsies or atsinganoi throughout the Balkans and Greece. He wanders with a large kumpaniya of the allied families of Demeter, Hatzichos, the Volanos, and of course, the Torenu. Together, they make their way from town to town and city to city, living off the land, plying their trades, entertaining the townsfolk and villagers, and conducting every kind of scam or burglary that their undead patron can devise. For Irendo is fond of taking what doesn’t belong to him, whether that be coin and treasure, or the lives of those who displease him. And the servants and friends of Sanser, his enemy of several centuries, displease him greatly.

Despite the length of their bitter feud, Sanser readily admits that he does not really understand Irendo’s hatred for him, other than perhaps the perceived insult of bringing some of the Roma people across into his own bloodline — the Alexandrites. Apparently, Irendo and his phralmulo kin despise the shilmulo, and the Western Ravnos families in particular, because they have strayed from the strange faith to which all Eastern Ravnos fanatically adhere. Charlatans like Sanser have perverted the course of fate and destiny, and make no attempts to make amends. Therefore, Embracing the Roma, whom the the phralmulo maintain as their exclusive property and the chosen people for producing more of themselves, is apparently some ultimate, unforgivable insult.

Or, Sanser has also said with a wink, perhaps Irendo just hates losing.

The two elders have waged a battle of wits over the course of centuries, luring each other and their mortal proxies into countless schemes to weaken, shame, injure, discredit, or imprison the other. At times, the feud has grown deadly, such as the brutal events surrounding the embrace of Andras Taragoš. Sanser has yet to tell his grandchilde what exactly enraged the phralmulo to precipitate that particular attack, other than to say that the insult given was not equal to the response. Indeed, according to Sanser, on “nearly every” occasion, it has been Irendo rather than he who has escalated the rivalry to bloodshed. Indeed, while he is a smuggler, thief, and a, well, a vampire, and he makes no pretensions of existing according to high-minded virtues, Sanser simply doesn’t feel that killing hapless mortals over such a petty feud is worth the stain on his soul. Obviously, Irendo does not share his misgivings, as Andras can readily attest.

For his brutal attack, and wilful ignorance of the Sixth Tradition, Prince Thibald of Thessalonica declared a Blood Hunt on Irendo. He escaped the punishment, of course, but he has never been welcome in the city afterwards.

In any case, the gypsy elder appears to be keeping a score of some sort. When the mortally wounded Andras was rescued by a handful of Cainites (including Francis, Odda, Ulfe, and Vyron and brought to Sanser and Vassily Taltos, the old smuggler ruefully thanked and simultaneously warned them that Irendo had likely marked them for vengeance because of their interference. Once Vassily embraced Andras, he additionally warned the fledgeling that it was likely that Irendo would see to the embrace one of his own kumpaniya too; tasking his own descendant with being a foil to Sanser’s grandchilde.

During his attack on Andras Taragoš and Camlo Taltos, Irendo was observed as being a master of Chimerstry. He also demonstrated proficiency with the Disciplines of Celerity, Fortitude, and Potence. His command of Obfuscate was sufficient to make use of Vanish from the Mind’s Eye.

Lineage: Childe of Margali, of the Phralmulo jati, and a descendant of the Rakshasa. Irendo claims to be of the 6th generation. 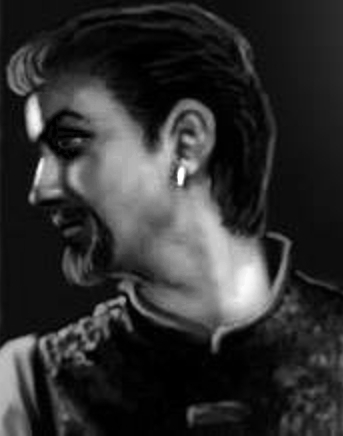